Leaving Stockholm and the Vasa behind, we drove south to arrive at an aire near Nynashamn, a simple, remote gravel lay-by that held the potential for local hike walks into the surrounding nature reserve.  These were not really feasible with the now torrential, incessant, muddy-puddle producing rain we were driving through.  We thought at least, as the only inhabitants around this night, we’d have a quiet, restful sleep.  In defiance of our thoughts, a large double trailer lorry pulled into the open site at around 11pm making all sorts of noise.  After finally quietening down, it then left noisily at around 4am after running its growling engine for twenty very long, sleep-disrupting minutes.

The heavy, plodding rain continued the next morning, so with little else to do but move on, we headed on south to Nyköping.  There was a free aire here at the marina, complete with electricity, and we dodged large, deep puddles full of floodwater to reach the only remaining dry pitch.  Our neighbours had seemingly parked up on a sunny day, and then confidently left for a day of exploration elsewhere.  Their van was surrounded by soft fabric-covered chairs and other camping accessories, left outside and now drenched in the centre of a deep muddy lake.  A few hours later they returned and surveyed the carnage, and had to move their van and gear, piece by sodden piece, to another part of the car-park away from the muddy flood.  They did not look overly impressed.  During a brief respite in the weather we walked along the river into the centre of Nyköping, where we visited the Tourist Office before dawdling around the market square and seeing the local sights.  We stopped into an old castle that was closed for the season, but we could still walk through the stone courtyard for a brief look.  There was precious little else to be seen.

We serviced then kept on south as we hoped for a break in the weather.  We passed through Norrköping town as we went, and headed on to Oskarshamn, then turned inland to park up at an aire at a public swim place on the banks of a pretty lake, near Berga.  The site parking was very sloping but being the only visitors we found a flat area in the centre and settled in, watching the choppy lake from our window. We had a short forest walk in the rain where we saw locals foraging for mushrooms.  The swim site was well provisioned, grassy and neat, with floating L-shaped pontoons reaching out into the lake, providing an easy way into the deeper waters whilst also creating a secure, sheltered area near the shore for younger bathers.  It even had a specific pontoon designated as a dog bathing area.

We sat out the night with the rain continuing as before, but the morning brought a welcome break from the watery percussion and we decided to embark on a pre-breakfast swim.  The air was cold with a light, wet mist still hovering over the surface, and the water chilled from the recent rains.  There was some hesitancy as we paced along the creaking pontoon, attempting to convince ourselves this wasn’t a silly idea, but an inspired one. We fought the shock of entry as our skin instantly chilled on breaking the calm, reflective surface, but with the initial shock over we settled in and enjoyed a wonderfully refreshing float.  We swam short distances out and back, Nicky more vigorous than me, as I was wary of over-stressing my still damaged shoulder. The easily forgotten rain suddenly began falling again, light and slow, as we emerged to dry ourselves on the pontoon.  We quickly returned to Benny for a warming shower before devouring, suddenly famished, our hearty breakfasts.  It felt good to have (mostly) dodged the rain for a more rewarding and immersive wet experience. 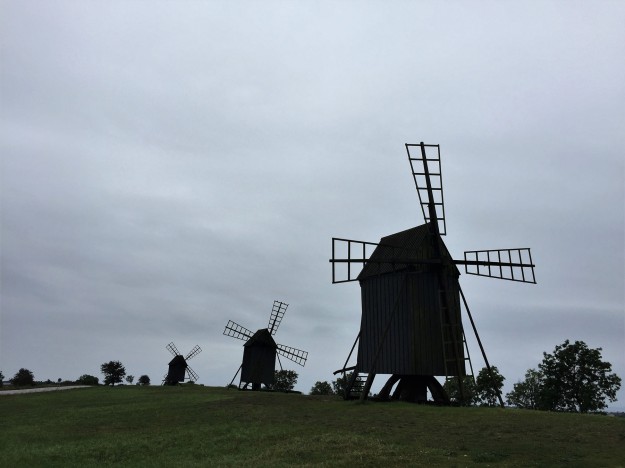 Glad we had made something of this short opportunity between almost- constant downpours, we returned to the road and headed next to the large town of Kalmar.  Only passing through, we filled up with fuel and tasty treats from Lidl’s bakery before crossing the 6k causeway bridge to the long, thin island of Öland. The north of the island is predominantly flat and agricultural with diverse coastal meadows, the southern half a large, flat limestone plateau that, due in part to the extent and complexity of its flora, creating a valuable ecosystem for nesting birds, has been granted UNESCO World Heritage status.  We stopped to examine a few of the many timber windmills and prehistoric burial sites scattered around the island, the main points of interest on our route. We drove down the west coast road before cutting across the middle of the island to the east coast at Torngård, where there was a small parking aire in a neat coppice of trees near the sea. 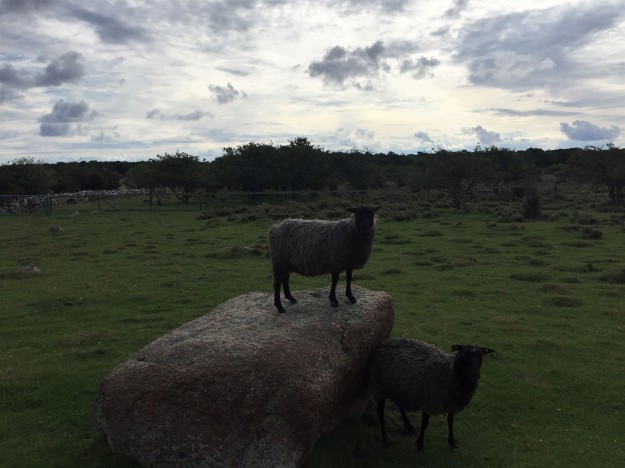 We went for a short beach walk, following the coastline south.  It was a rough, smelly, wind-swept emptiness, an area of bleak scrubland with no tall features, trees or buildings, just a scrappy, repetitively barren vision stretching on to the horizon.  It was mainly grazing land for animals, and we found it very different from the rest of Sweden we’d visited; desolate and bare, and whilst it is a bird-watchers paradise we were not left especially moved or impressed.  The on-going deluge from the grey skies may have influenced our perception of this ancient landscape, and under a bright sun it would surely have held more of an interest for us.  We settled in again for another grey, rainy night, but this time with an invigoratingly wild view of a foaming, stormy sea.

We were awakened early by cows noisily licking the back of our van, mere inches from our heads, having parked just a little too close to the fence behind for comfort. We had to roll forward a little to avoid the continued attention and the cows eventually lost interest in us.  We drove south, to the very tip of the island beyond Ottenby, to visit the lighthouse, Långe Jan, and the attached bird sanctuary.  There were a lot of cars visiting, mostly filled with keen, well-equipped twitchers here to photograph or simply enjoy watching the extensive range of birdlife along the headland shore.  The Naturum display building on site was also awash with excited children, a visiting school class. 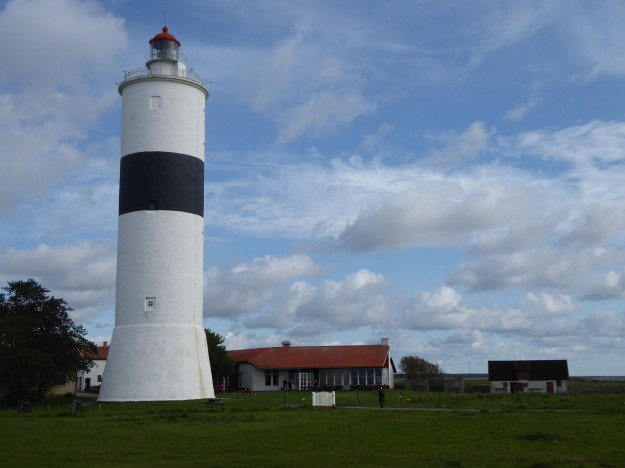 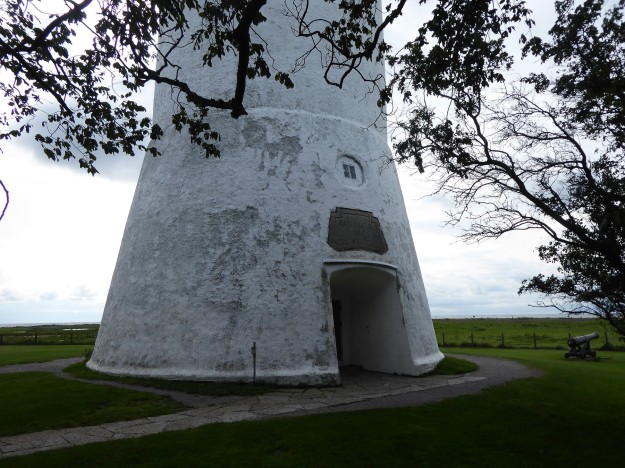 We browsed the exhibits and played with their interactive migration simulation, before chatting to an enthusiastic member of staff about the work they do.  Many varied migratory species pass through the rich waters of southern Sweden on their travels to South Africa or beyond, returning each year to the same spot.  The centre have set up light, almost invisible nets in their gardens, to carefully capture birds flitting between trees, so they can be recorded and tagged before their release.  They also have walk-in traps on the rocks at the shore, where certain species of birds wander through a tight entrance they cannot return through, allowing them to be collected and ringed.  The nets and traps are checked every 20 minutes to avoid any prolonged distress to any caught birds.

We stroked a ruff that had recently been trapped and ringed by the sanctuary.  It was a young male in tawny beige and drab brown colours, the lull before the colourful storm of display feathers he may choose to grow later in an attempt to attract females.  The species is unique in birdlife, in that there are two distinct routes a male can choose to follow in pursuit of a mate – they can ruff up, develop a multi-coloured display and defend a territory with the hope of attracting females with their colourful antics, or they can stay neutral coloured and homeless, travelling between many other territories, attempting to pick up loose females along the way.  Both choices have distinct advantages and disadvantages in their drive for progeny.

We walked a long loop back to where we’d parked, watching the many birds being watched by many, before continuing back north along the west coast of the island.  The sun was out, the sky was clear and blue, and the island was looking much more inviting, but no less flat, than on our arrival. It had been a nice diversion to see a little of these wild lands on the east coast of Sweden, but we were now headed back to the mainland to continue south.