We tossed and turned throughout the night, uncomfortably hot in our tin box at the bottom of the hill in Moustier-Sainte-Marie.  We finally found some welcome sleep, until the Gendarme arrived and knocked on our door to confirm our ticket purchase, although it was clearly visible in our window.  It was time to move, and today we were heading into lavender country.  Our first miles took us west and it wasn’t long before we began seeing wide seas of purples replace the greens and yellows of alternative crops.   Our first stop was in the town of Valensole, seen as the heart of lavender production in this area.  We stopped at a small museum with displays explaining the history of growing and harvesting, alongside historic tools. In the attached shop the many uses were very much in evidence.

Back on the road, we soon stopped again in a dusty parking area to have a closer look at the lavender in-situ.  We walked through the rolling purple fields, up and down the neat rows, wilting in the hot, hazy air.  Several other cars had stopped in the same place for that important lavender selfie.  After a short walk we returned to find half the people huddling together in the shade of Benny’s tall side, the only respite from the harsh sun for miles around.  We drove off leaving them scurrying through the lavender rows and visited a farm shop, buying a few small gifts.  We later called into a larger lavender museum in Coustellet where, despite their huge range of products, we couldn’t harness any excitement. We lingered, feigning interest, but our concern lay in the quality of their air-conditioning.

We had planned on spending several days in this area, taking our time to explore many of the lavender-related curiosities and historic sites.  But it was just a little too crowded, a bit too samey, over-commercialised, and much too hot.  We were drooping badly, even from minor efforts.  We drove through Roussillon, planning to see the red ochre cliffs, but did not stop as we could not face the midday sun.  It was silly; we were in one of the most beautiful areas of France and had the means to explore it all, but all we could think of was getting to a campsite and getting underwater.  So we abandoned all sight-seeing and headed straight to Camping des Sources, set a little way north of the historic town of Gordes.  At last, we had shade, a decent swimming pool, and some downtime from the heat.

Unable to sleep, from both the heat and an unusually repetitive bird-call, we decided to rise early and go for a gentle walk/run into the village of Gordes. We left at 6.30am, in cool morning air with the first rays of light breaking through the trees.  A downhill stony path provided an easy trail into the village centre less than 2km away.  It felt good, our first run since our 10km in Aiguines, the breeze of our movement keeping us cool.  Early morning starts will now become an essential to our sight-seeing plans.  We paused to explore the central streets of Gordes, trying to spot where scenes in the movie ‘A Good Year’ were filmed.  We saw viewpoints overlooking the beautiful Provençal countryside, the rolling hills scattered with cypress and olive trees shimmering beautifully in the early morning light. 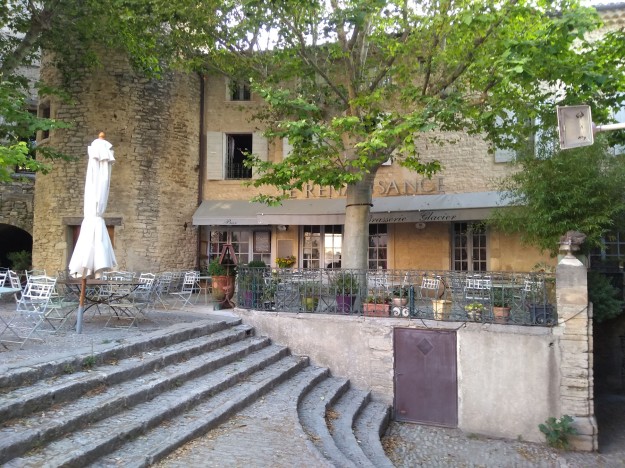 We had exhausted the quiet streets of Gordes centre and it was not yet 7.15am, so we decided to visit another nearby landmark – the Abbaye de Sénanque, set in a valley around 4km north-west of Gordes.  We set off up the hill, rising steadily.  The sun was also rising and the air was heating quickly, our cool morning run already becoming hot and sticky, but not yet debilitating.  We walked some steeper portions of the route, not wanting a full-on workout.  Soon  we reached the highest point of the road and dropped quickly down into the shaded valley to our left, entering the gardens of the abbey.  Even without the sun the manicured rows of lavender bushes surrounding the abbey provided a bright splash of colour.  There were several other visitors already setting up photos in the early light. 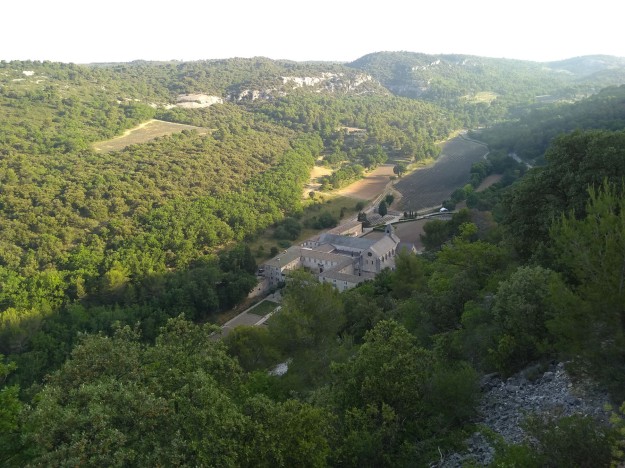 The sun had not yet penetrated the depth of the valley floor, but blocks of light were moving quickly down a side wall so it would soon arrive. The neat rows of purple-tipped lavender were covered in thick clouds of tiny white butterflies, landing and alighting in a blur.  They would tickle your skin as they flitted by, or gently land on your arms, legs and head as you walked through the flowering rows.  It was an engaging sight of such simple beauty, their soft frolicking ways brought instant smiles to our faces.  We met a cyclist amongst the lavender who had passed us on the road up.  We had known from the timbre of his passing ‘bonjour’ he was an English speaker, and turned out to be from Melbourne.  We had a chat about his travels and quizzed him on places around Melbourne as we have plans to visit his city next year.  As we talked the sun rose to breach the valley and light up the grey abbey facade, adding life and warmth.

We found a different path back out of the valley.  A white-stoned path, narrow and overhung by foliage, led up the face in the direction of Gordes.  We arrived back at Benny by 8.30am, feeling good for the exploration and for having avoided the worst of the heat.  But it was coming.  The days have held so sticky and close that sometimes the best part of the day is when a breeze blows through and cleanses your skin.  But that is rare; the air, static and burning, offers little respite. It’s been many years since we experienced such high temperatures.  We couldn’t face any activity and had forgotten just how debilitating it was, how draining.  We showered and headed straight to the pool.  We dipped often as the sun quickly cranked up the air temperature to the mid 40°s, the peak showing  of the heatwave.