Disclaimer:  We are finding it difficult to find a way to encapsulate the highs and lows, physically and emotionally, of the overall experience of hiking the Tour du Mont Blanc circuit, so the following three posts are more of a simplified, chronological walk around the loop with us.  We will likely revisit this hike and write a more reflective, compelling post in weeks to come, but for now we will let a simple description, alongside our many vivid photographs, reflect on our days.

Overview route map for the TMB:

We started from our tiny campsite Le Grand Champ under cloudy skies and walked along the empty road to catch a free bus into Chamonix centre.  From here we had a steep path up to reach Plan Praz lift, the top of which would form the true start of our TMB hiking loop.  We arrived and started hesitantly,  following the Balcon Sud traversing north east around the slopes, through an expanse of fir trees.  We passed large stone walls, snow breaks we guessed,  with wide spaces between. It became a busy path with many people on the trail, the majority of them coming towards us.  After a few hours, we took an optional variant route to visit Lac Blanc, adding 45 mins to our day, but more beautiful scenery.  It was a tough climb, with many day walkers from Chamonix adding to the numbers. It was slow going as we faced large stepped boulders to climb and bodies to navigate past as we inched our way upwards towards the plateau with the White Lake. 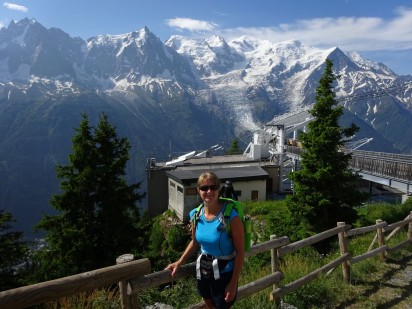 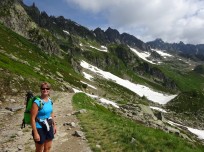 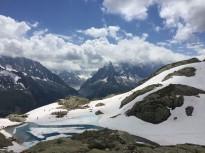 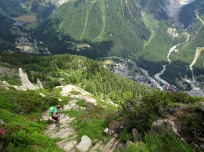 There were occasional small snow fields here, but all well-trodden and easy to cross.  It was a slow, hard climb to reach the lake where we paused for lunch.  We then followed a long path down, passing by another beautiful mountain lake, to find a run of vertical ladders and handrails with the feel of a via ferretta. We watched climbers play on a tall needle rock as we descended the ladders, then we took the wrong route down through a deep forest, a lovely but steep trail signposted to Argentières.  We ran out of water 30 mins from end, having carried over 3 litres but having found nowhere to replenish them,  on this sticky hot and rather draining day.  We finally popped out in Argentières 50m from our hotel, La Couronne, and were quickly gifted a lovely room with a bath – a perfect way to relax with the beers and snacks soon collected from the nearby supermarket. This, our first day, was much harder than expected, and we both had sore legs.  We began to worry that our hiking fitness was not fully what we had expected. This was classed as an easy day on paper, so we were apprehensive over what was to come. 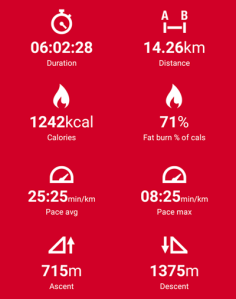 There was heavy rain overnight, wild storms that were fun to watch, but it was dry once we began walking.  After a filling 7am breakfast we were packed up and ready by 8am. We headed steeply uphill out of town, found our route and rose quickly through the treeline, passing several campsites with multiple colourful tents.  The path was generally easy underfoot, pine needles and tree roots, but with a solid, consistently steep ascent for over two hours. We were rewarded with breath-taking views of the Mont Blanc Massif behind us, and stopped often to gaze at it in wonder.  We followed the l’Aiguilette de Possette ridge up to 2209m, a beautiful, rolling path with views to both sides, before dropping down into Switzerland, then rising again to reach Col des Balmes.  We paused at an old mountain cabin with a small shop inside, busy with trekkers as a key point on route.  Beyond us we could see lots of winding, dusty downhill paths with grunting and desperate people, heads down and making their way up in what looked like misery.

We bounced down, an easy path in this direction, really a wide gravel track at this point. We passed four hardy bikers heroically cycling up this path on fat bikes, and soon after found the lower part of their route had been very steep, rutted with roots and stones.  We had a long, monotonous drop to reach the valley floor, losing 1000m of height, but with the sound of cowbells and flowering meadows around, fulfilling the required Swiss stereotype. We crossed two lightly-flowing rivers and then walked the length of Trient, passing a bright Pink Church, to reach Hotel La Grand Ourse.  We were unavoidably in a dorm room here, with eight beds. There was no shop in town, but a small bar in the hotel.  We discovered that even with my sunhat on and 50+ cream I still got rather burnt today., but at least there was no sign of the snow we had been told we would need mini-spikes to cross.  We enjoyed some slow beers at 5pm chatting to a US couple hiking as a family of four.  We had a loud, communal dinner at 7, like a Harry Potter feast, where we chatted lots, then everyone was suddenly off for an early bed. 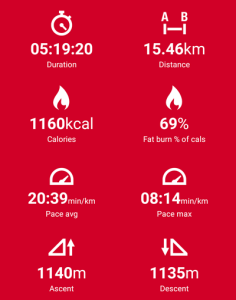 We had a poor night’s sleep in our dorm, due to loud snoring by someone.  We were then rudely awoken very early, by a 5.45am alarm set by one of our roomies. At 7am we faced a free-for-all scramble at breakfast, then, to escape the madness, begin walking by 7.35am.  We headed back uphill through dense forests, a quiet trail passing lots of tents, to reach the shops at La Forclaz col, where we looked around but bought nothing. We refilled our water bottles here, then followed an easy path that levelled out, allowing a striding pace, with steep meadows falling away on our left. We faced more long rises on smooth stone and dirt paths to reach the top of today’s main climb, Bovine.  There were flowering Swiss meadows with noisy cow bells everywhere.  We met an Aussie couple at the top of the Col and again at Bovine café where we enjoyed a slice of apricot pie. Our path ahead was blocked by resting cows, so we took an alternative route behind the café through patches of nettles to avoid them.  From here we followed a long, easy drop downhill, meeting hundreds of fellow walkers struggling up the persistent route. 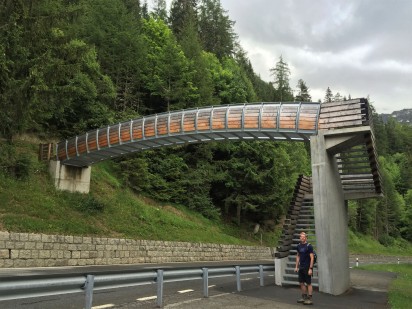 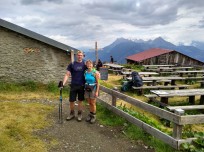 As we dropped, we passed spectacular snowy peaks with waterfalls and rivers running down their face. We felt a little smug as we easily dropped down as others struggled up. We crossed several rivers, much easier than had been suggested to us, and finally broke out of the tree-line onto a flat path about 90 minutes later, still meeting others only now starting up the climb to the Col. We followed a long easy road into Champex, a flat fire track through thick fir forests.  It began to rain as we approached the centre of town, so we nipped into what turned out to be a very expensive supermarket for a few lunch items, before getting decently soaked as we made our way to Hotel Splendide.  We passed by a large lake with some hardy fishermen braving the heavy rains to catch their dinner.  We were checked in by 1pm, enjoying the great view from our lovely double room with a balcony, so glad not to be in a dorm again.  We ate our supermarket lunch and showered, then relaxed and snoozed all through the afternoon. Our luggage arrived later, then we dressed up for dinner at 8, which proved to be a rather posh affair with four courses.

After heavy rains all through the night, we decided on a leisurely start, enjoying a lovely breakfast at 8.30am.  We then left to begin walking dressed in waterproof jackets due to the light but persistent morning rain, but with shorts on as still quite warm. We had a damp walk downhill through a neatly forested area filled with many carved wooden statues of mushrooms and various woodland animals; a treasure-trove of curiosities. From here it was mostly low-level walking through quaint, ancient villages – we passed wheat drying barns with traditional timber-work and stone-plinthed hay barns. It was all easy walking on rolling paths through the valley, no big climbs or big mountain views, but lots of interesting chalet houses and pretty meadows.  There were gnomes galore at one over-decorated home.  We later faced a few short woodland climbs, but nothing strenuous in comparison to previous days. We passed a huge dry riverbed with massive boulders strewn around that must be entirely wild when in full flood.  We also found a patch of deep, icy snow, kept insulated with a coating of landslide soil, solidly unmelted.  We then passed a tall waterfall, admiring it from a distance, as we approached La Fouly. 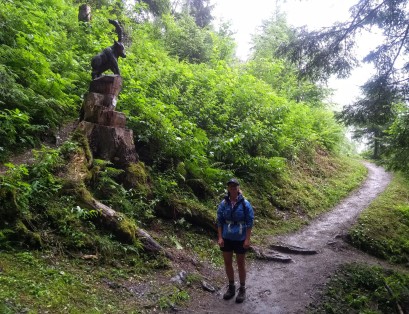 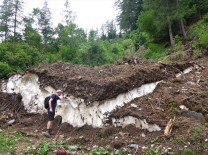 We passed a large campsite with climbing walls and tree-top walkways and a dam with raging water control to enter the village of La Fouly.  Hotel Edelweiss was not yet ready for us to check in, so we went for another short walk, completed a small supermarket shop and ate lunch before checking-in. Low cloud darkened the valley, hiding the surrounding mountains, but we could see La Fouly would be a beautiful place if the weather would only allow us to see it. We spent a lazy afternoon with a bottle of red, watching Wimbledon in our room, then had an early dinner beside an interesting English couple from Canterbury who were walking the TMB the opposite direction to us.  We later watched Brazil vs Belgium in the World Cup quarters, then chilled in our room, glad of the restful downtime.  We could hear a noisy set-up was happening outside for the grand start of an Ultra-marathon race in the morning.  This had definitely been the best day for us to have had poor weather and visibility, safely away from the big views.

Our Tour du Mont Blanc hike synopsis to be continued…