We finished up our trip around the Vesterålen islands and drove in the direction of the airport at Evenes. Nicky’s mum was flying out to meet up with us for a week or so, having hired a small traditional, rustic cabin for the three of us to base ourselves deep in the centre of the island chain on Vestvågøy.  We had a false start at the airport as mum missed her connection flight in Oslo airport due to a delayed first leg, and had to await the next flight up that evening.  We called and asked if we could hang out at the single room Airbnb place she had booked for her first night (with us parking in our motorhome outside) and they helpfully said “no problems, help yourselves”.  So we relaxed for the afternoon in the warm sun by the small private beach at the pretty timber cabin as we awaited the arrival of the later flight. 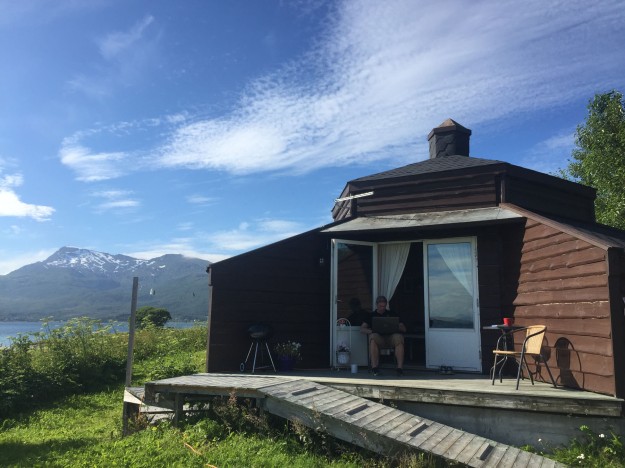 After a quick swoop to the airport, we returned successfully, with mum on board, to the cabin to settle in for the night.  We had a short wander on the beach in the evening light, the girls with their essential G&Ts after the stressful and tiring travels of the day.  We caught up over a later dinner and chatted about the proposed activities and adventures we anticipated in the week to come, although disappointingly the forecast weather was looking like spoiling the party.  Still, we vowed we’d make the best of it all regardless, and with Norway weather, you never know.

DAY 2 (Wednesday) – Via Svolvaer to the Red Cabin

We had a relaxing breakfast, then tidied up and started out for our main base for the week, on Vestvågøy.  It was a long and very pretty drive, initially following Tjeldfjorden for many miles.  The scenery was not at its wonderful best due to the damp, grey morning, but it was still spectacular enough for new visitors from Lincolnshire.  The miles melted away as we passed mountains and lakes, crossed bridges and escaped long tunnels, all the while following the E10 west.  With no timescale binding us, we stopped at each special tourist viewpoint in turn, where we absorbed the expansive views and fresh air and enjoyed the opportunity to stretch our legs.  We stopped in for a look at the island capital of Svolvær, but found the town itself rather uninspiring. 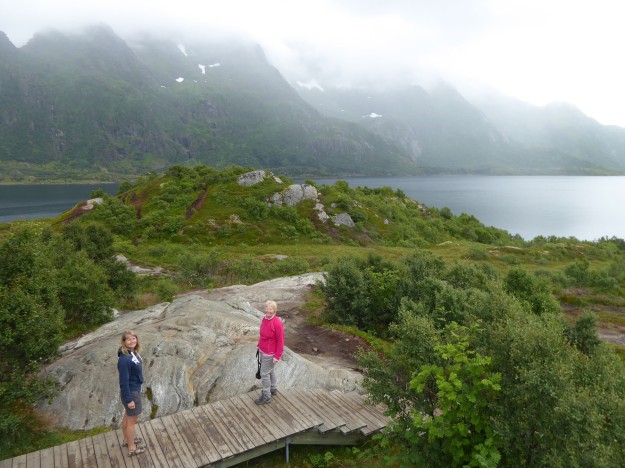 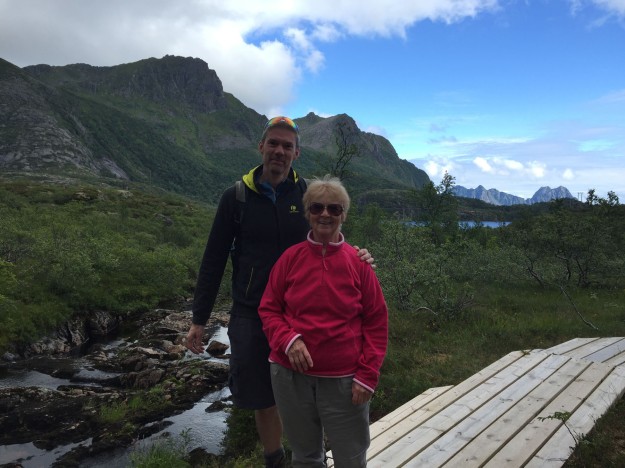 We found another local walk nearby that we thought might be more interesting, and after a short drive to a nearby lake, we parked up at a Red Cross Centre and walked out along a stony path to the shores of another, much larger, lake.  The route would eventually lead to a camping cabin deep in the mountains, but we would only cover a short portion of the walk to a small beach area, before turning back.  Almost the entire path was built up in timber walkways, making the going underfoot easy and the navigation trivial.  We were able to pick wild blueberries from just off the route to have as tasty snacks as we walked.  It was very pleasant to spend some time in the great outdoors. 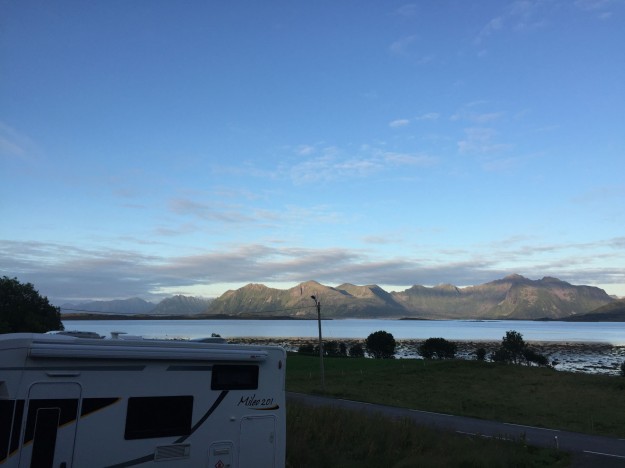 We drove on to Vestvågøy, then turned north off the E10 and followed a small coastal road for a few miles to find our little red cabin.  Its setting was lovely with a huge mountain backdrop and the fjord waters close on the other side, with huge ranges of jagged peaks opposite.  Unfortunately, inside the cabin was quite a bit more rustic than we had hoped for, with its last interior decoration seemingly having been carried out at the turn of the previous century, certainly not this one.  The electrical circuits were all max. 10 amps, so the electric heaters had to be turned off before the kettle could be boiled, and the oven, shower or washing machine could all only be used one at a time.  We must have tripped the house around thirty times during our stay until we understood every nuance – not exactly ideal.  We made it as homely as possible with the addition of all our gear, some colourful balloons and lots of food and booze.

We had a short walk along the local coast road after dinner, enjoying the continuing light evenings, to see if we could find a local beach.  We could see the stony coast of the fjord but frustratingly there was no obvious public access to it, and the fields we could cross were all fenced.  We’d been told in Norway just to make your own path, but jumping fences seemed a step to far, so we would have to find alternative places to swim, if the opportunity to arose.

We awoke after a deep, long sleep to find the morning was simply perfect; it was bright and clear, with an almost cloudless sky framing the high granite peaks set across the fjord from our cabin.  We had all agreed to undertaking a long road trip today, to the very ends of the island chain.  This would also help us get our bearings and perhaps identify any wonderful spots that we may wish to return to later in the week.  We stopped soon at a high viewpoint to take in the view, before dropping down a hill where we passed the Lofoten Viking Museum.  We were happy to note it was only 15 minutes from our cabin, as we’d definitely be returning there on a coming day.  We passed near to Leknes town but kept moving onwards, eyeing up a stop on Flakstadøya island, at Ramberg beach.  We parked in a circular car-park and walked the short path to the sands and wandered along a while, enjoying the pretty bay.

After such a wonderful start the weather had slowly become dull, cloudy and overcast, but the rain stayed off for our entire trip down, and with the occasional bright sunburst escaping through the clouds we were treated to glimpses of the raw beauty of the Lofoten islands.  We had short stops at several viewpoints on the quite busy route, feeling like proper sight-seeing tourists for the first time in months. We reached the beautiful fishing village of Reine and instantly recognised it as the cover photo on our Norway travel guide.  We stopped a short distance out of town for a few photos, but we were double-parked and couldn’t find anywhere else to stop to allow us to walk around the village.  With little other option we kept moving, weaving our way along the narrow coast road, passing Moskenes, to arrive at Å, the last very town on the road. 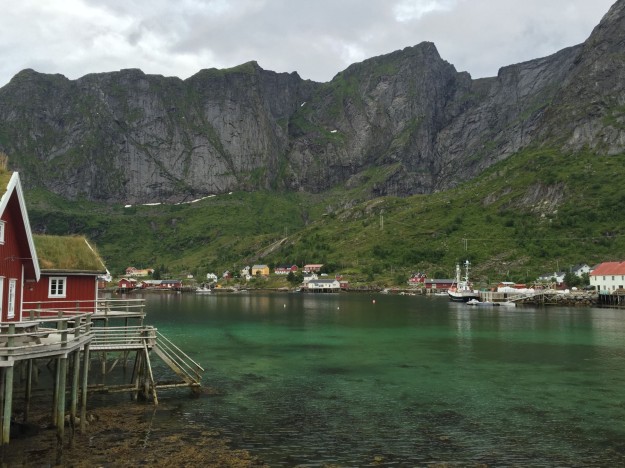 We parked in the large car-park with many other motorhomes and decided on a cup of tea before exploring, and in the time it took to boil the rains began, heavily falling and fully dampening our determination to hike the path the ends of Moskenesøy.  Instead we had a short explore around the town before beginning our journey back along the same road, in very different weather.  The clouds had absorbed the distant mountains and encroached on the nearby fjords, giving the whole region an ethereal glow, leaving us glad we had taken the time to stop at each viewpoint on the road down.  We made it back to our red cabin and had a relaxing dinner and a few drinks over the evening, whilst watching the every-changing view and colours of the surrounding fjord and mountains from the warm safety of our living room windows. 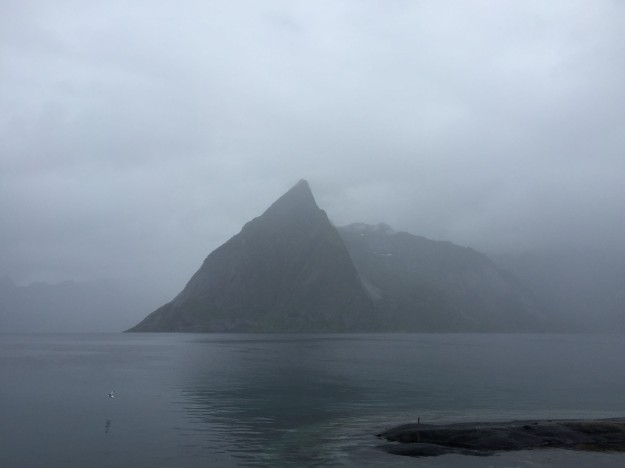 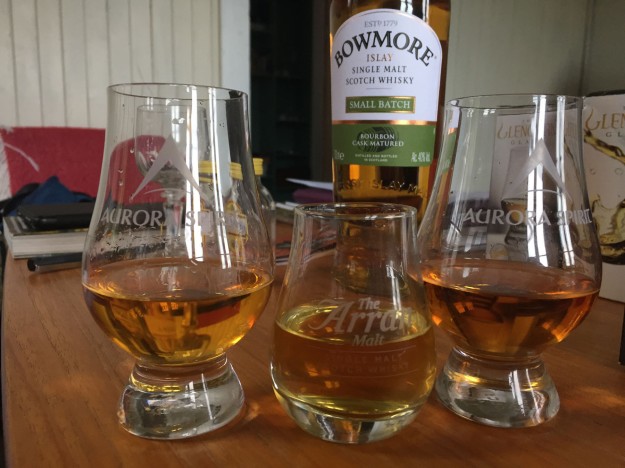 After a long day’s driving west to Å, we headed east this morning, only a short way along the E10 road we had arrived on before turning south to head for Henningsvær.  Almost immediately after turning of the main road we spotted a wide sandy beach, and we had to stop to appease the swimming instinct of our visiting mummy.  She had a burning desire to have a dip somewhere within the Arctic Circle, and weather be damned, here it was to be.  Mum changed within Benny and, towel in hand, walked down the beach past a group of Spanish tourists wrapped up in scarfs and gloves like it was mid-winter.  She walked into the chilly sea and swam a while, as she loves to do, and on exiting the water was greeted with a rousing and heartfelt round of applause from the Spanish onlookers. 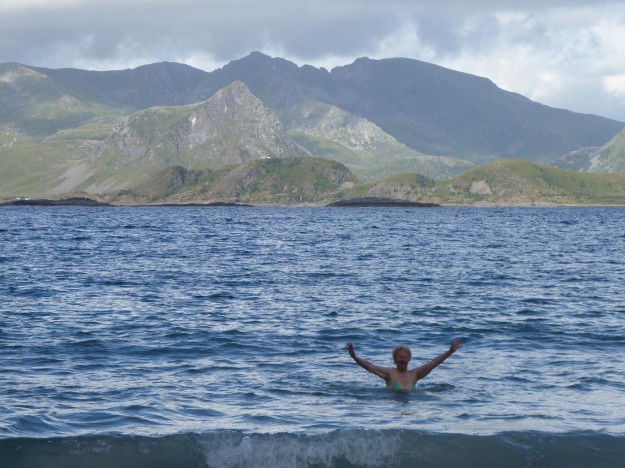 We continued on into the fishing village of Henningsvær, where we parked up in a very tight space and walked around the pretty town.  We continued through the harbour and out onto the stony headland behind, passing under rows of tall timber racks constructed for drying stockfish.  Cod has been dried here in a similar manner from perhaps as long as 6000 years.  Beyond them we climbed up a rippled stone hill, riven with long cracks and fissures, to reach a small view point adjacent to a tiny red and white lighthouse building.  The views out over the fjord and back to town were magical, even under the dull, dark skies we were experiencing. 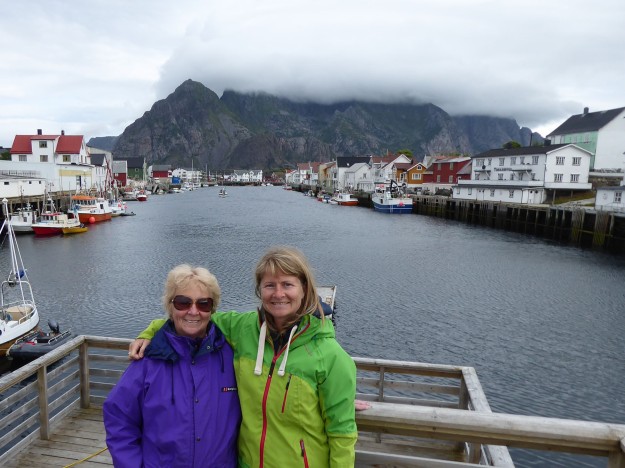 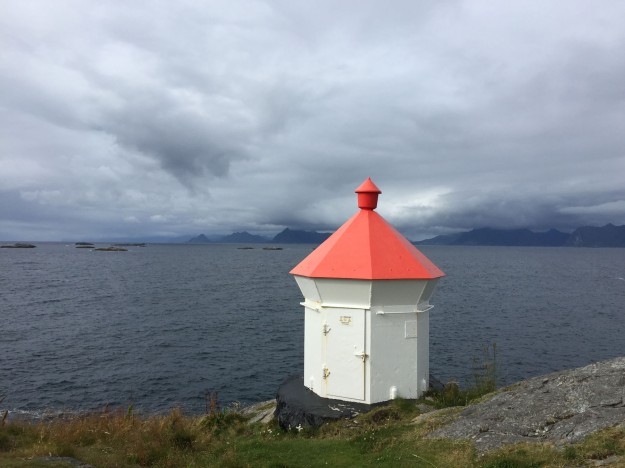 We drove back along the same road, the rain beginning to spit, in search of a short hike we could all undertake.  We found a nearby climb to a pretty lake, and despite the rain we decided to give it a go.  The start was along the main road, not ideal, but we soon turned to face the mountain, only to find a large boulder field and a difficult scramble that proved a little too much from mum. We got a short way up, enough to give great views back over the bay below, before retracing our steps back to Benny.  We decided that was sufficient exploration for one day and headed back home for a relaxing evening.

Later this Friday night the ladies had planned a special beach trot (or tolt) on Icelandic horses under the midnight sun, but the persistent drizzly rain and, more pertinently, high cross winds, led to the ride being cancelled.  We waited each subsequent night to see if it would be rescheduled, finding out only a few hours before if it was to be on or not, but unfortunately it was cancelled again and again.  This could have been a real highlight of the trip had the weather been kind, but unfortunately it was not to be.