To Melkevoll Bretun campsite in the heart of Jostedalsbreen National Park

Leaving the quiet, spacious and open aire at Skjolden, we continued on the same National Tourist Road Sognefjellet, following the northern coast of Lustrafjorden as we passed through Gaupne and beyond.  The day was blanketed in white with spots of rain.

We reached the main town of Sogndal, only an hour and a half away from where we’d been in Flåm quite a few miles ago.  We had hoped to visit a vineyard owner near here, one who was friends with our recent WorkAway hosts in Denmark.  But we couldn’t quite parse the limited address we’d been given and, not being entirely committed to the idea of turning up on a stranger’s doorstep, we didn’t try too hard to find out more. 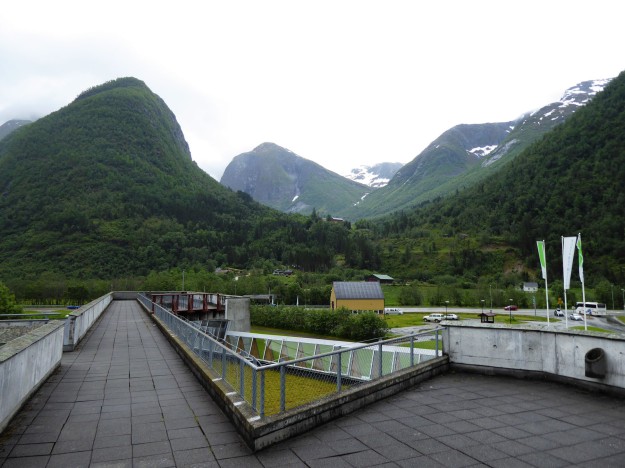 Instead, we stopped in to visit the Norsk Bremuseum, the Norwegian Glacier Museum.  We had seen many photos of the model mammoths and the iconic building in many brochures, but the reality was rather less glossy.  The building was in a sad state of disrepair, with cracks, patches of moss and staining leaks all over the badly-maintained roof, many caused directly by the lack of consideration in the detailing.  It was disappointing up on the roof terrace viewpoint, with poorly laid and broken paviours leading around walkways protected only with low, thin diagonal wire mesh fencing fixed roughly to wobbling galvanised posts.  The building apparently won an architectural award in 1992 and whilst the overall form was quite interesting and innovative, we wondered if the judges only saw photos and drawings without an actual site visit. 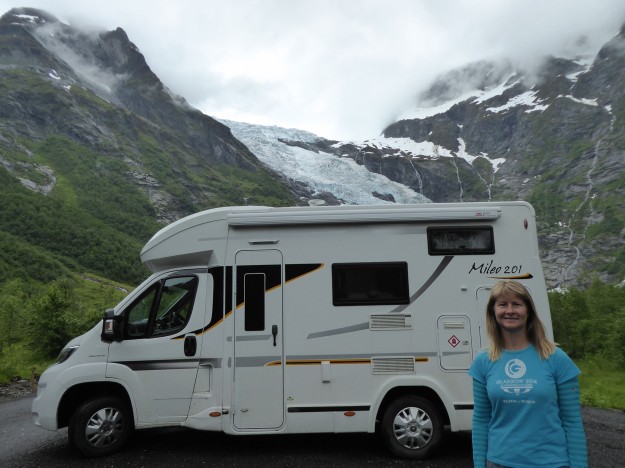 We next stopped in a picnic spot called Bøyabreen, near Brævasshytta, that was positioned only 400m or so from one tongue of the Jostedalsbreen glacier we were now circling around.  Even with sodden monochrome skies above it was an impressive sight, with its cracked, sometimes blue, glacial ice pouring down the valley face. This would have made a great aire to stop in overnight, and several vans were already in place, but we wanted to be on the other side of the glacier, right in the centre of the park, so we kept moving.  We continued through Skei and dropped down steep hairpins to the settlement of Utvik on the edge of Innvikfjorden, the inner finger of the larger Nordfjord. 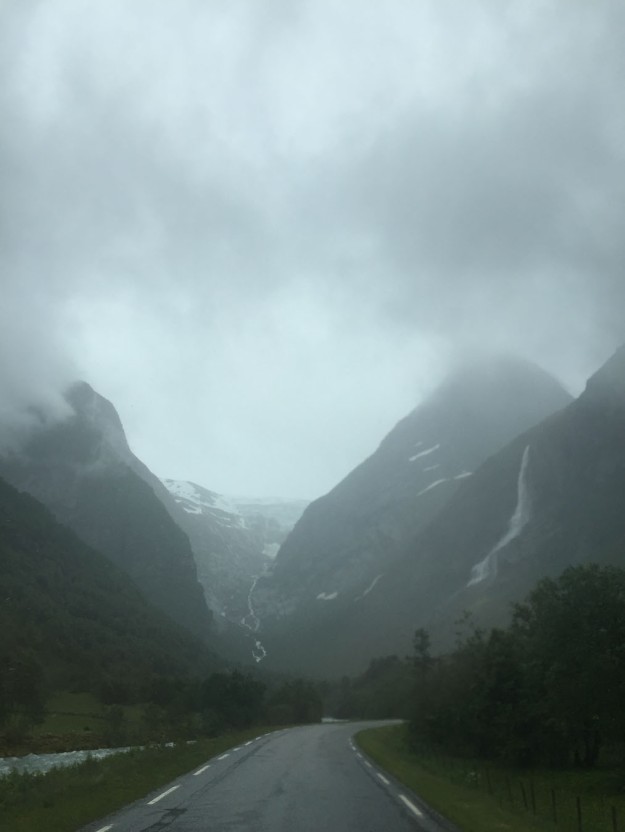 Nordfjord sells itself as the most fjord beautiful in the world, and it may well be, but unfortunately we didn’t see it at its absolute best in the dull greyness.  We followed the water to the village of Olden, where we turned south along a narrow road beside two long, clear lakes.  After a long day’s driving, we eventually arrived into Melkevoll Bretun campsite around 3pm.  For the final few miles of approach we were facing directly down a wild valley with a direct, stunning view up to the Jostedalsbreen glacier behind.  The weather had made everything in camp soft and muddy, removing the immediate shine of a place touted as one of the most beautifully situated campsites in the world.  But it was still a compelling setting, in a cauldron of dark mountains with a view of two glacial tongues and a waterfall. 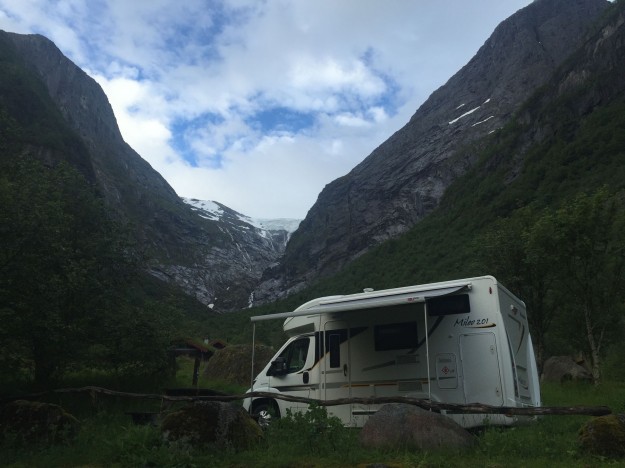 The first thing we noticed was the incredible noise from the mighty Volefossen waterfall right by the camp.  It was flowing much heavier than normal due to the overly wet June, as was the bubbling, frothy river passing through the centre of camp.  The constant roar of the water added a murmuring backdrop of about 40 decibels to the otherwise still air. There were few others here, so we had our choice of pitches and settled into one near to the communal cooking areas and showers, the only hard-standing pitch we could see, rather than be snuggled away in a private corner on a grass site as would normally be our preference.  There was just too much rain falling to be walking far.

We requested the free sauna be warmed up for 6pm, then explored a little around the site. We sat a while in the Stone Age cave, a wonderful dining and party space that could be hired for functions, seating up to 50.  The central communal cooking area was delightful, with rustic wooden benching and a focal wood fire for light and warmth.  The large gable conservatory offered panoramic views across the camp and up to the Melkevoll glacier.  We had our relaxing hot sauna, where in true Scandinavian style we were joined by several naked men to Nicky’s initial slight awkwardness.  Later, we cooked and ate our dinner by the wood fire, the only people in the cabin this night, all the while enjoying the wonderful glacial views. 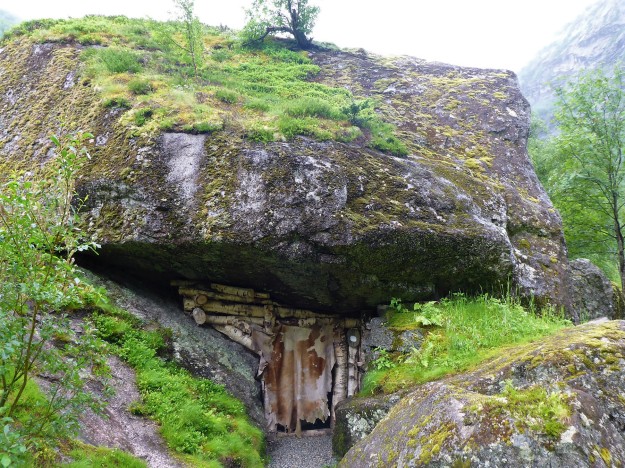 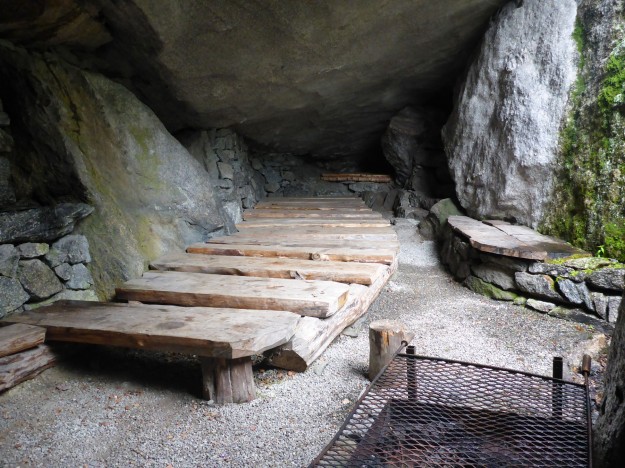 We sat inside much of the following day, catching up with small jobs, writing and doing laundry whilst the skies emptied all that they had on us.  A deep layer of white cloud filled the valley, blocking out the glaciers and much of the surrounding mountains.  The afternoon brought a short break in the deluge, and we took the opportunity to explore around the camp a little more.  We walked around locally, with the ever-present loud monotone of the giant Volefossen waterfall keeping us company. We reached the waterfall viewpoint where we learned its total height was 355m with the largest freefall of water 185m; yet it was only the 45th largest waterfall in Norway. 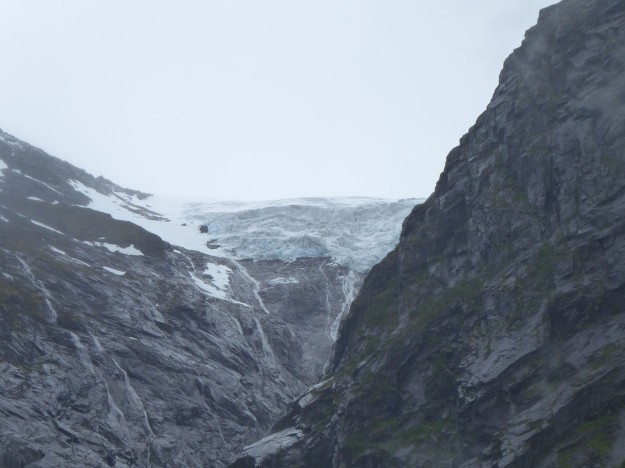 The next day started much like the previous, and we began to wonder if we’d have a dry window of opportunity to fully explore.  But suddenly, just before lunchtime, things began to change and the dense cloud cover broke and began to dissipate.  We jumped at the opportunity walk up past the large hotel to the Briksdal Glacier.  An easy 45 minute walk from the campsite, we started climbing and almost immediately were amazed by the extent of the crowds.  We’d been living in our quiet, private bubble in our gloriously empty campsite, and suddenly there were multiple coachloads of visitors clambering all over our mountain, and even being driven up the route on little green Troll Cars. 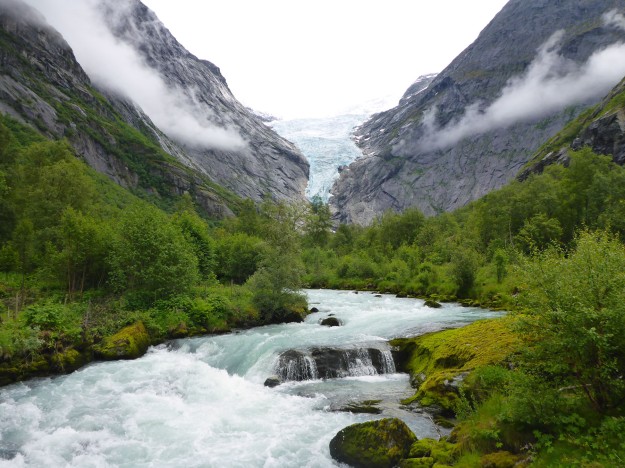 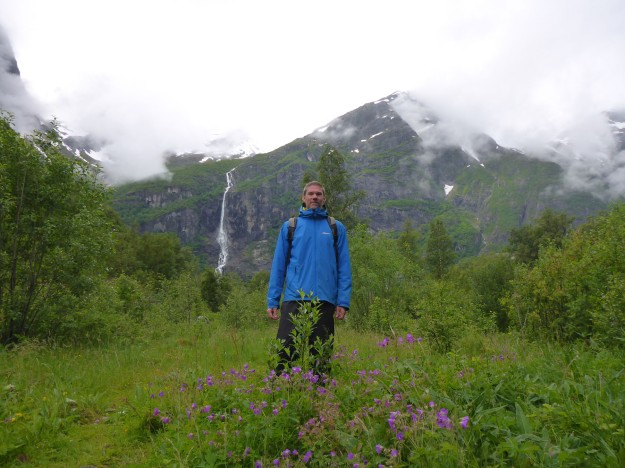 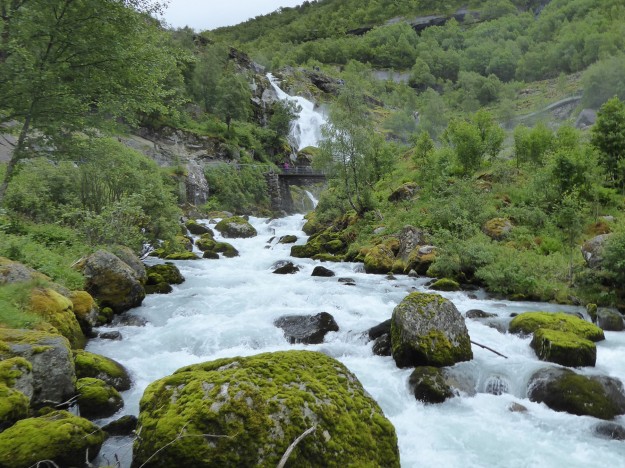 But the day was now bright yet cool and we were approaching a glacier, so couldn’t complain too much.  We dodged the crowds as best we could on the walk up, staying out of range of all carelessly swinging umbrellas.  We tried an alternative side path first to escape the hordes, but were denied progress after around ten minutes of walking by very slippery flat rocks, so had to retreat to re-join the main path.  We continued up to the beach plateau on the shore of a turquoise glacial lake, right below the glacier tongue. It was a stunning sight, and well worth the effort to visit.  We enjoyed taking a few posed photos and doodling about the stones, sucking in the wonderful view.

That evening we again asked for the sauna to be ready for 6pm and had a wonderfully peaceful hour sitting in the heat, with the occasional quick, and very cold, dip into the nearby river pool sans clothes.  It was doubly refreshing for both the cold shock and the relaxed attitude.  A German gentleman joined me in the sauna and told me his wife had been chatting to a mad Englishwoman who kept jumping in the river; I had to own up to that being my wife, and to me doing the very same.  Rather than judge, he got interested and joined in with the cold, naked dips, so we weren’t the only mad ones in camp. 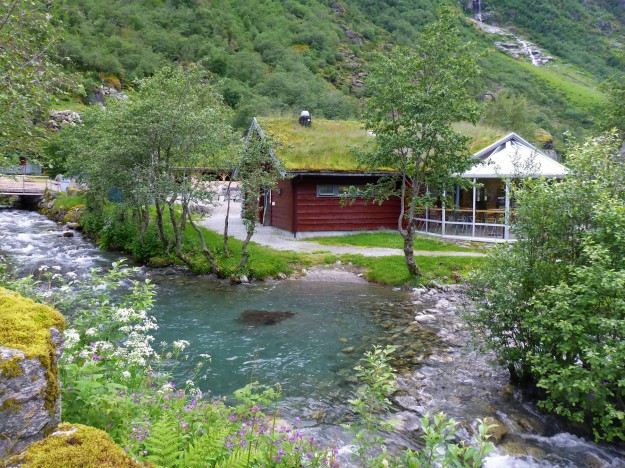 We ate dinner again in the shared cabin this time in the company of three Swiss couples, who cooked their meal over the communal wood fire, filling the cabin with quite beautiful smells.  It was another fun night with open, clear views to the glacier and lots of wine.  Now that we’d completed the main walk, our time here was coming to a close.  We really couldn’t fault this day as a final farewell to our comfortable, if wet, stay in the beautiful campsite of Melkevoll Bretun.