We serviced and left the pretty hilltop aire in Dampniat, heading across country.  The weather had turned and we no longer enjoyed wonderfully clear blue skies, but a dull, thick greyness now permeated everything, blocking out the light.  A light drizzle occasionally fell, obscuring our view as much as the lack of light did, making it a fairly miserable, grey day for sight-seeing and photography.  But we persisted with our plan, and next to see was Turenne.

Turenne is bastide village, one built in a circular plan on a domed hill, historically providing both prestige and security for the residents. We arrived on the outskirts and slowly inched our way down a tight lane into the town’s aire, amazed to see a huge 9m long Concorde parked up already, with no idea of how he manged to turn himself into the site. We weren’t staying so parked at the back of the aire, away from the free electricity points, and walked into the town.  The sky was a uniform blankness, an off-white sheet of featureless cloud.  Even with the lack of light on this overcast day, the first square we reached, less than a minute from the aire, was simply beautiful.  The town’s white stone mixed with a pale hanging mist gave an ethereal quality to the buildings, and they oozed class and eminence. 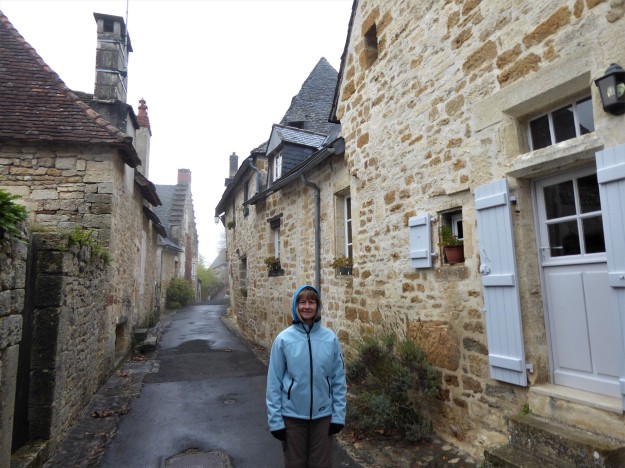 We walked along narrow streets lined with colour-giving hanging baskets, all neatly tended even this late in the year. It was so tranquil, out of season, casually wandering and envisioning the lives of those who had passed through these gates in ancient times, and similarly imagining what it must be like to live in this village today.  Turenne had very difficult and tight access for cars and would certainly be hard to cycle to and from. We continued uphill to reach the main castle, passing many private homes and gîtes for hire, some with tiny swimming pools.  Several balconies offered expansive views down over the valley and the lower portions of the town.  The view was mostly shrouded in low-lying mist, but the occasional stray breath of wind would momentarily clear the obstruction and allow us a look.

We returned to the aire and carefully headed on, ready for our next stop at nearby Collonges-la-Rouge.  This was yet another place with the designation of ‘Beau Village’ and we soon felt it richly deserved its classification.  There was a dedicated motorhome aire on the outskirts, and we walked in from there, slightly unsure if we needed to pay.  Our approach offered an overview of the town from a distance, and of several route options we could take.  The dark red sandstone of all of the buildings in the well-preserved small town was almost burgundy in colour.  Sadly, it cast a deeper pastel shade than normal under dull, blank skies and although we were sure we weren’t seeing it at its best, the intricate narrow streets full of many bespoke quaint homes and local artisan businesses was still a delight to see. 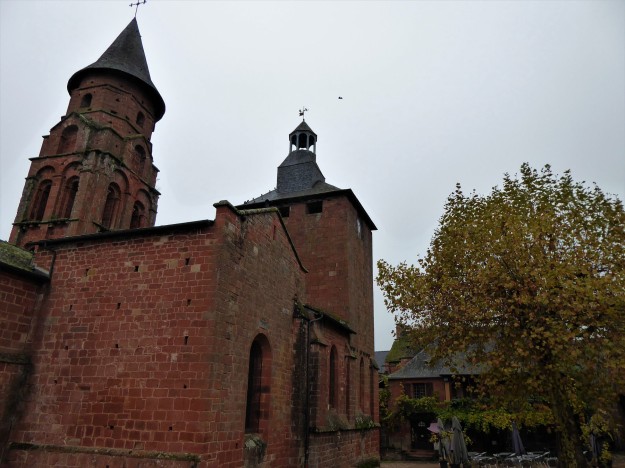 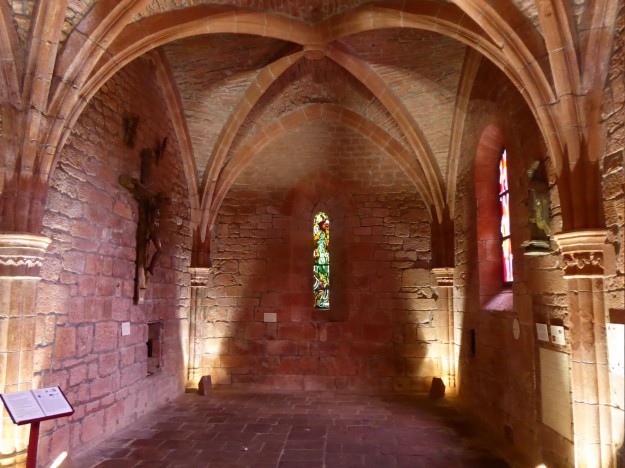 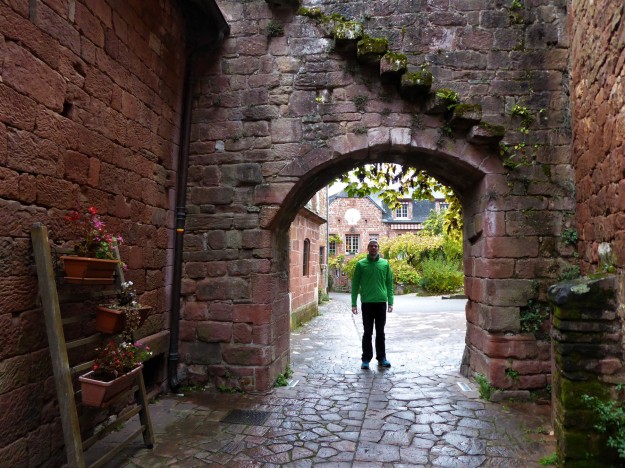 The village can historically be traced to the 8th century CE, but has had a rather chequered history. It profited and grew from the custom of pilgrims passing through the nearby pilgrimage site of Rocamadour, but the French revolution caused the destruction of key priory buildings.  It underwent a brief economic recovery in the 19th century until dwindling population numbers led the village to becoming not much more than a stone quarry.  Only in the early 20th century did villagers create a movement that eventually secured the classification of the village as an important historic monument.  Collonges-la-Rouge was the founding member of the ‘Les Plus Beaux Villages de France’ association, a brainchild of the mayor, and has since become one of the most visited places in the region. 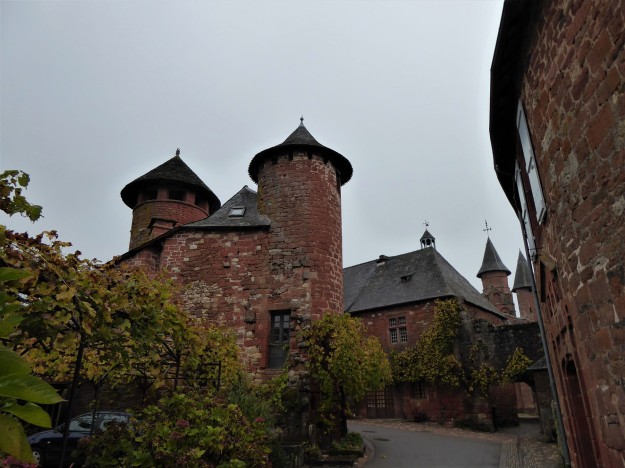 The village was like a perfect film set; each twist of the pathway, every turn of a street corner, brought a new vista of beauty and interest even on this, the dullest of days.  Red and yellow-leafed ivy hung off the high sandstone walls in beautiful cascading curtains, adding a softening aged grandeur.  Most of the village’s commerce was closed, but we passed one restaurant whose vents were expelling the most wonderful aromas.  We had read that the sandstone is known to glow brightly under a warm sun and we vowed to revisit at a future time to experience this.  Collonges-la-Rouge had a tight, compact centre and we completed various loops to ensure we’d walked every possible path and seen all the key buildings from all angles, absorbing the sights as much as we could during our all too brief visit. 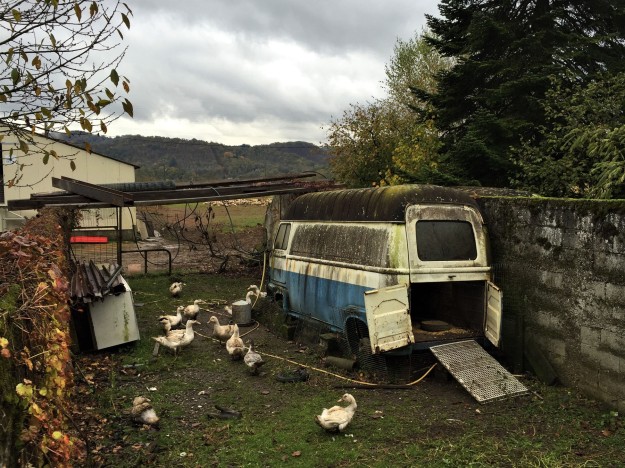 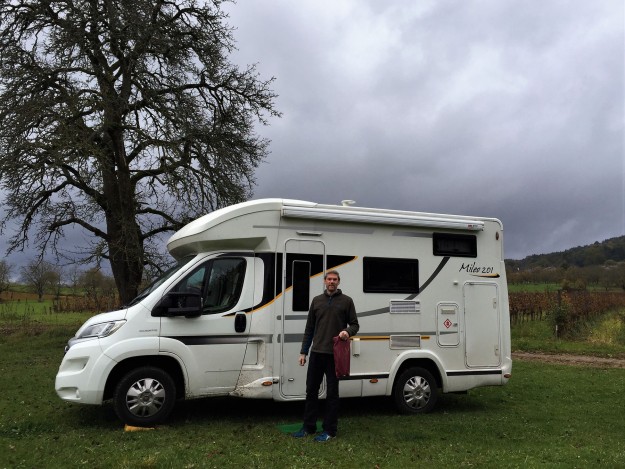 We planned to overnight stop at a nearby farm­, but it proved difficult to find as the co-ordinates listed on their website led only to the centre of the nearby village of Brivezac.  We eventually found Domaine du Chirac on Google maps and plotted our own route, only we headed up and over the mountain on single track farm roads, rather than around on proper roads.  We would have faced trouble had we met another vehicle on the way, but thankfully we didn’t.  This was a France Passion business, a local wine producer, and we were able to both park up for the night and enjoy a wine tasting.  Their specialty was rich, sweet white wine, which isn’t a particular favourite, but we enjoyed the tasting session and learning a little of the history of their business.  We purchased a bottle to serve as a sweet aperitif at our upcoming Christmas festivities, before settling in surrounded by geese, donkeys and farm dogs.