Leaving the Lofoten Islands and following the Atlantic Coast Road south, passing Saltstraumen, Mo I Rana and Trondheim to reach the outskirts of Oslo.

We said our goodbyes to Mummy Finch and the Lofoten islands and headed along the E10 in the direction of Narvik.  We’d already had a long drive from our base on Vestavågøy to reach the airport drop-off at Evenes, so had no desire to push on too far.  We started looking for a place to pass a quiet night, and we found a suitable place at our second attempt, at a small marina in Bjerkvik.  It was a little scruffy but it was also supremely quiet and we parked overlooking the water on a beautiful still evening.  The overnight fee was an honesty box noting that they would be delighted if we chose to donate 50 NOK (about £4.50), and we were glad to.  We had drinking water and could have had electric too if we parked on the other side of the groin, but preferred to forego that in preference of a sea view. 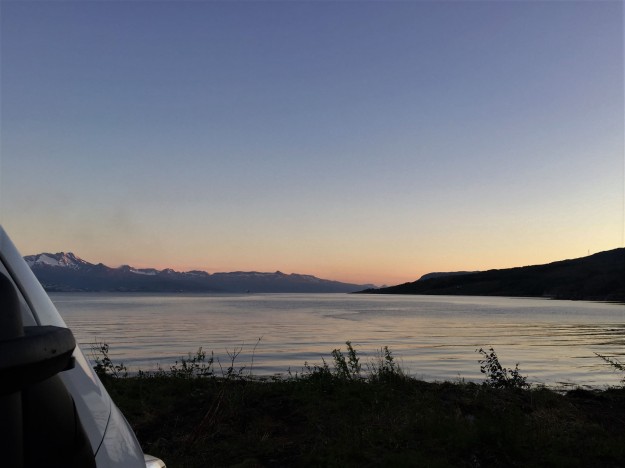 Later a group of four backpackers, couples from both Poland and Germany, turned up looking to camp on the only patch of grass on site at the marina, which meant right by where we were standing.  They politely asked permission from us, as if we could or would refuse, but this endeared them to us immediately and also earned them a slice of yummy fruit cake each.  They invited us to sit around their improvised cooking fire, but we were tired and opted for an early night.  The following morning we gifted them cereal bars and carton drinks, as they looked malnourished and because we felt guilty that everything was so casually easy in Benny and camping was just such hard graft. 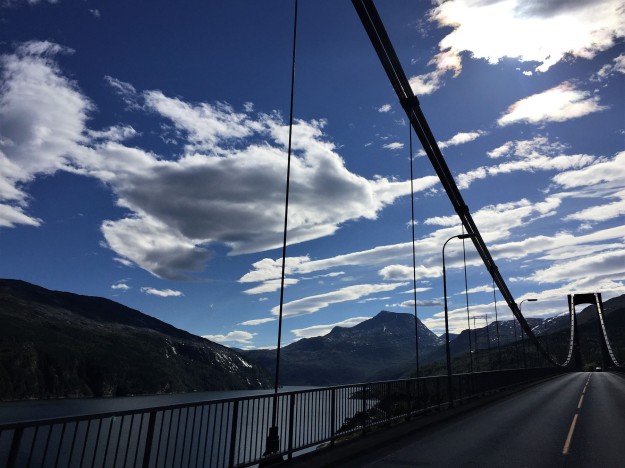 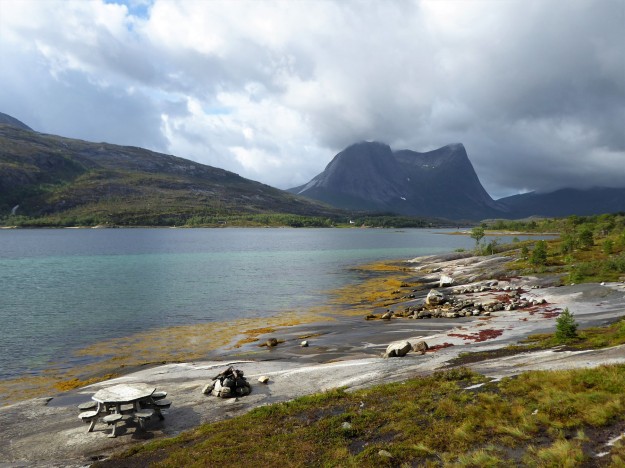 We followed the coast of the fjords and the North Atlantic, arriving in the northern hub of Narvik soon after.  We had considered making this a base for a week of local activities, but after we stopped for an hour we decided to push on, instead stopping at an island aire at Storøya to sit out the newly arrived rain.  The next morning we caught a short ferry across to Bognes, then continued the route south, arriving in the town of Fauske in early afternoon.  This was to be our only paid aire on our long journey south, in a motorhome-only area of the neat seafront of this pretty town.  We took the day to catch up with shopping and reorganising Benny back into order.  We also decided to skip the regional centre of Bodø in favour of a quicker route south. Our first stop next morning was at Bobil-Nord, a local Benimar dealer where we checked a few warranty issues with their helpful staff then it was on to Saltstrumen. 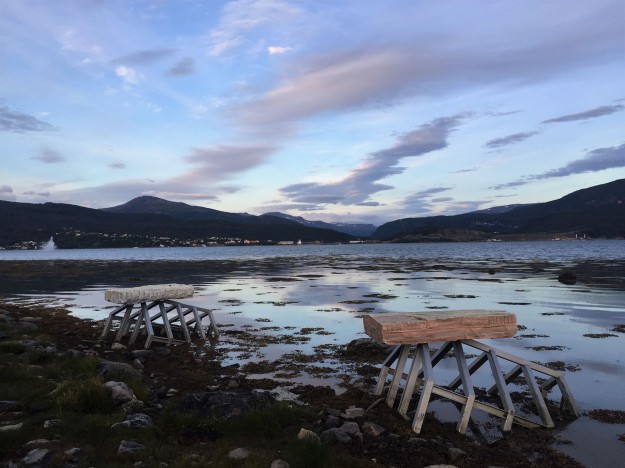 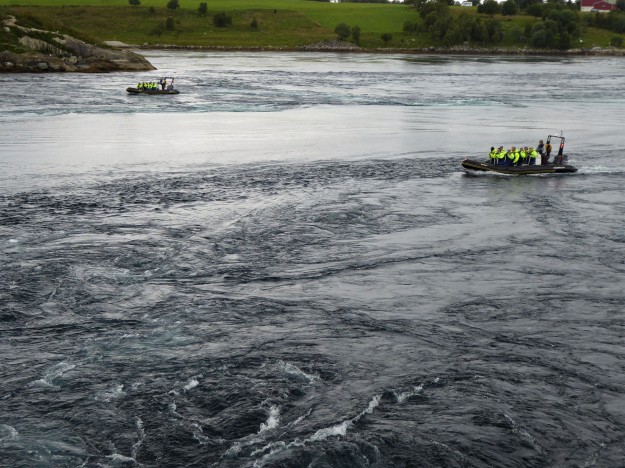 Touted as the world’s strongest tidal current, the Saltstrumen is a narrow 2km long channel between two deep fjords.  At its peak flow, under a full moon, the tide drags over 400 million cubic metres of water through a channel only 150m wide, causing a wildly powerful maelstrom with eddies and whirlpools popping up erratically in the rushing force of water.  We watched, transfixed at the swirling power of the surging incoming water, some areas looking more like a hot fissure below the surface was boiling the water. We half expected Godzilla to rise out of the wildly bubbling water.  Tourist-loaded boats skirted the whirlpools with familiar ease, utilising the central thin band of smooth current as a respite between excursions into the extremities of the frothing fray. 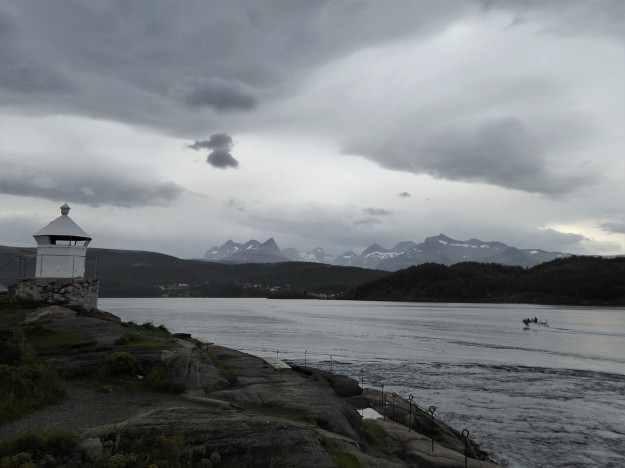 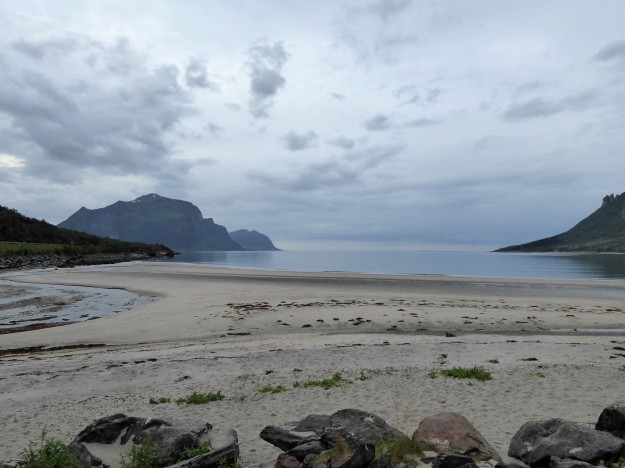 The jagged mountains behind formed a stunning back-drop to the continuing maelstrom, moody and grey against the sky.  We watched one brave fisherman in a small dingy with a wheezing outboard slowly cutting through the flow, heading upstream.  A few hundred hard won metres later his chugging engine cut out and in the time it took him to restart it, he had been forced back beyond the point where he’d started.  We walked up to look at what we thought was a visitor centre, but it was closed, the grass uncut and external seal enclosure area outside empty and dried up.  The whole place carried an air of sad abandonment.  The building itself looked quite new, so perhaps it was a seasonal thing and had closed up for winter, but in mid-August this seemed a bit of a stretch. 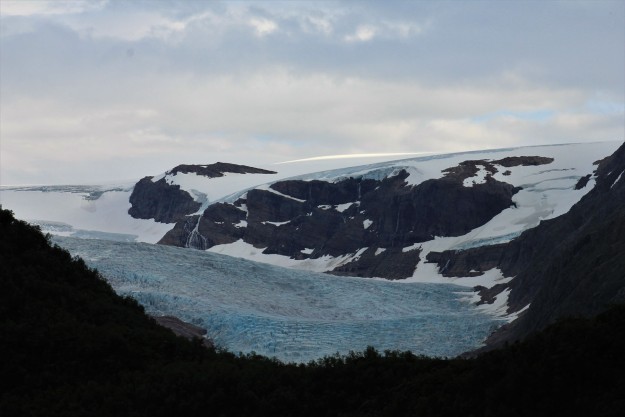 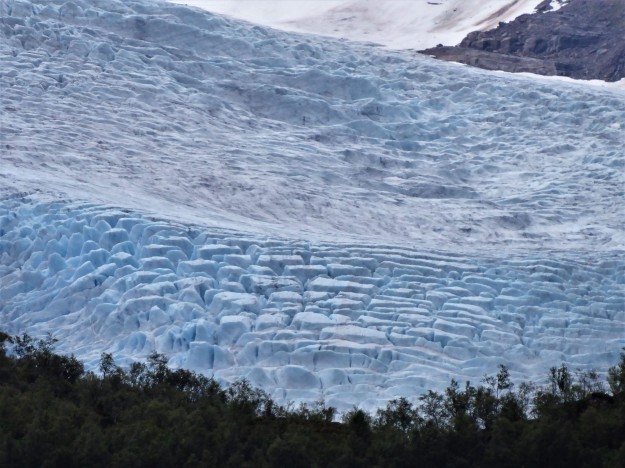 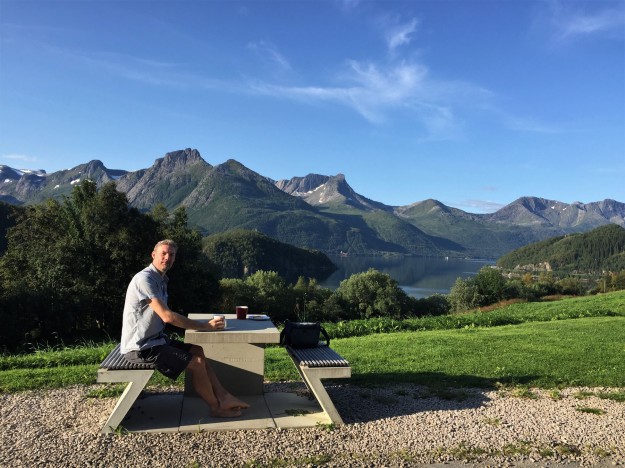 We pushed on south, eager to make good time, passing through Storvik and Oanes to reach the aire at the Hovden Tourist centre, directly overlooking Svartisen, Norway’s second largest glacier.  We passed a lazy afternoon and a colourful night watching the light change on the glacial tongues and undertaking short local walks.  We ate our breakfast under the gaze of the glacier and a clear blue sky before driving the short distance south to catch the early ferry to Ågskaret.  On board we floated past a large Polar Circle marker, denoting that we had now left the Arctic Circle, again further south than we were many weeks ago when we completed our Arctic Circle Swim.  We stopped in at several nice aires with ample parking and beautiful sea views, but we decided to overnight at Stokkvågen museum, where we had the opportunity to see the ruins of a fort, complete a coastal walk and visit a nearby sandy beach. 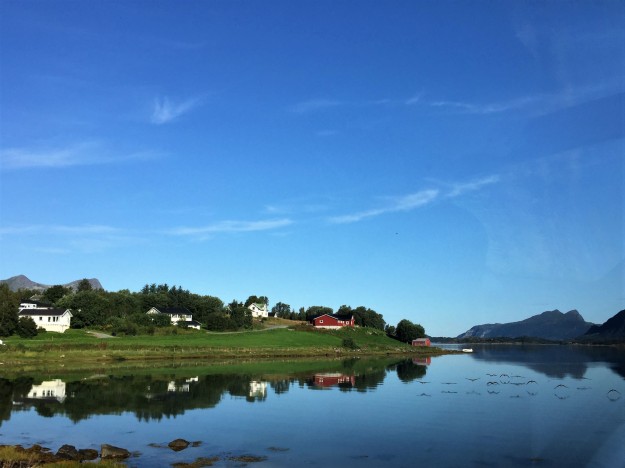 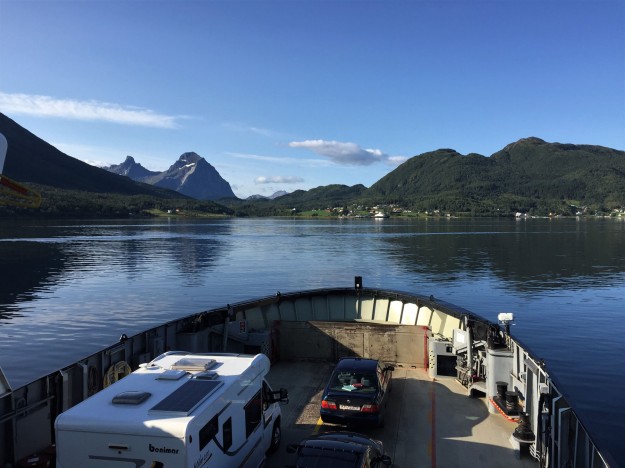 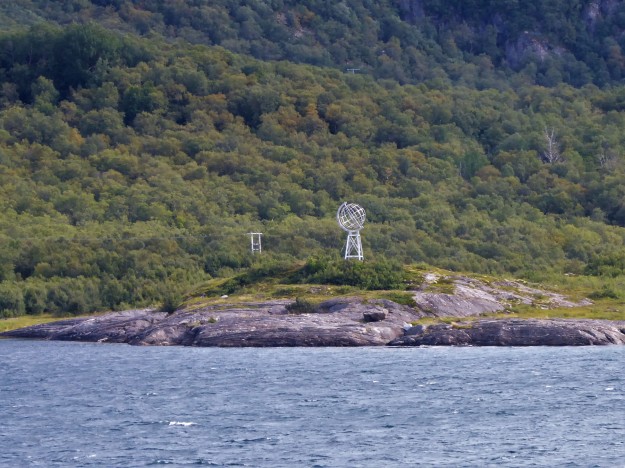 We walked up the hill to see the fort ruins, clambering into the creepy old tunnels and seeing the bases of the gun emplacements.  The views out to sea were far-reaching.  We walked around to the wide bay with the sandy beach with all intentions of swimming, but a biting cold wind was whipping though the bay and this discouraged us from undertaking more than a paddle.  We wandered in the shallows looking at crabs and small fish that darted around our ankles as they slowly turned white with cold. 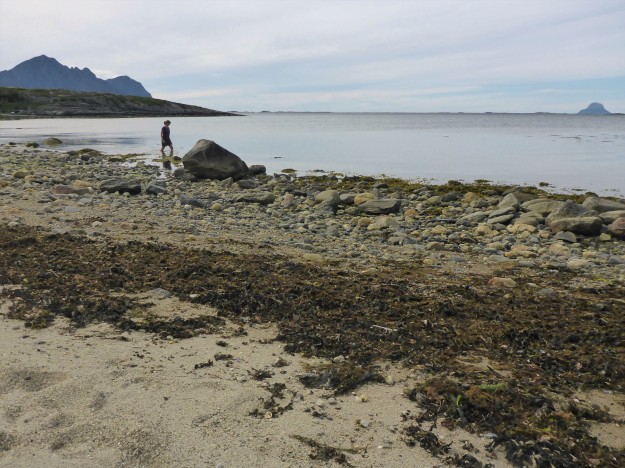 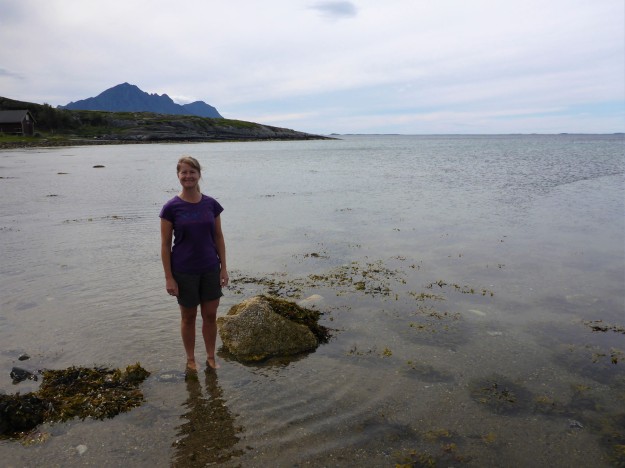 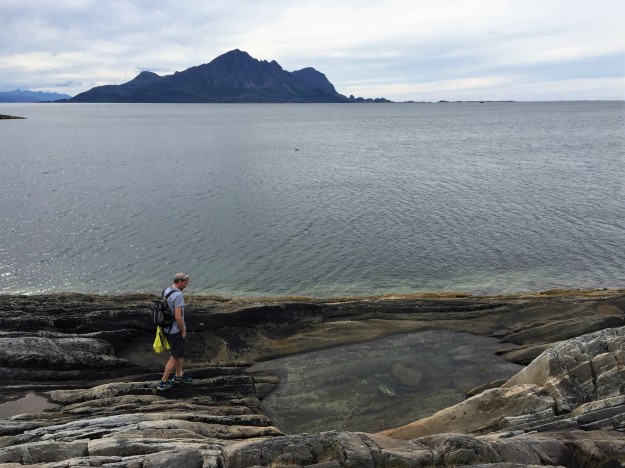 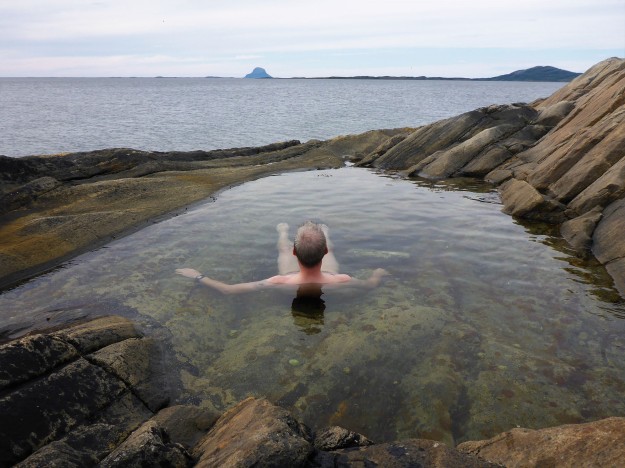 We walked instead around the stony headland, and happily found a wonderful, sheltered rock pool filled with sun-warmed water.  We stripped and dipped here, in our own personal hot-tub with a fantastic sea view.  Refreshed, we returned to Benny for a quiet dinner, before spotting a wild sunset out the window.  We clambered back up over the ruins of the fort to view the spectacle from a height, marvelling in the full, deep red glow that reminded us of Île de Ré. 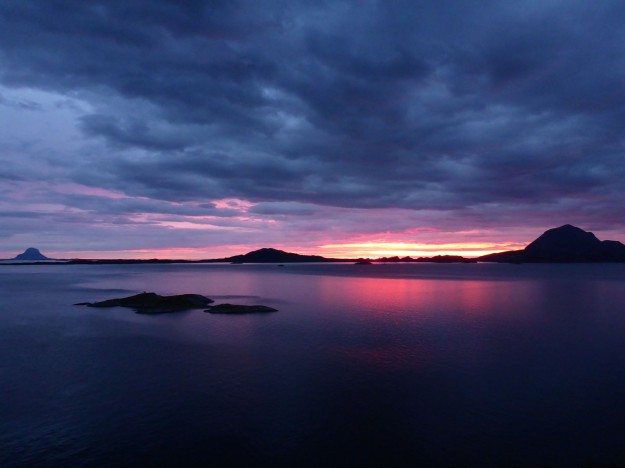 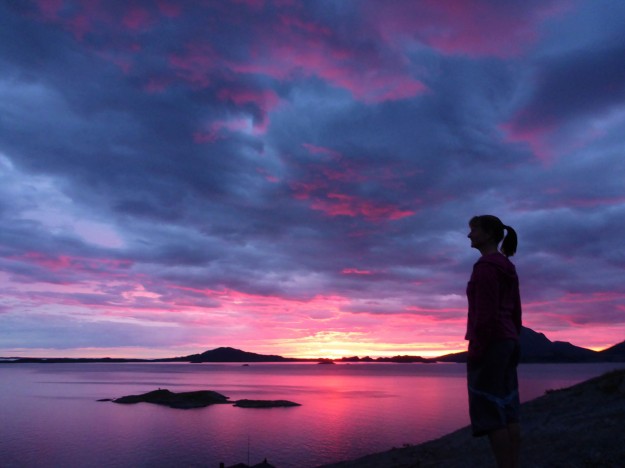 We woke early and moved quickly on, leaving the coastal National tourist route Helgelandskysten for a more inland and quicker, straight route south.  We passed through Mo I Rana only to pick up some shopping, before eating up the miles south on a straight, empty road.  We spent a few minutes at the tourist-trap of Laksforsen waterfall, before reaching Grong many miles later.  We crossed a blue metal bridge into town and parked in a very pretty parkland picnic area only a few minutes from the town centre.  The heavy rains in Norway that seemed to follow only a few moments behind us every day arrived on schedule so we spent another evening listening to the patter on our roof.

Next morning we arrived back in Hell, crossing our initial Norway east-west path as we now moved North-South.  We skirted around Trondheim picking up a few tolls on the way, before stopping in to a campsite at Kvikne.  After a few minutes looking around we decided it wasn’t for us, so continued on.  We were seeing wide fields of golden barley for the first time, sparking memories of Ol’ England. The road was more gentle and Sweden-like here, no majestic peaks or deep blue fjords, just hundreds of miles of easy rolling, tree-lined tarmac.  We arrived at a large lay-by picnic aire just short of the busy town of Tynset.  Here we enjoyed a quick walk to the nearby lake side before the inevitable rains began in earnest and we hunkered down for the night. 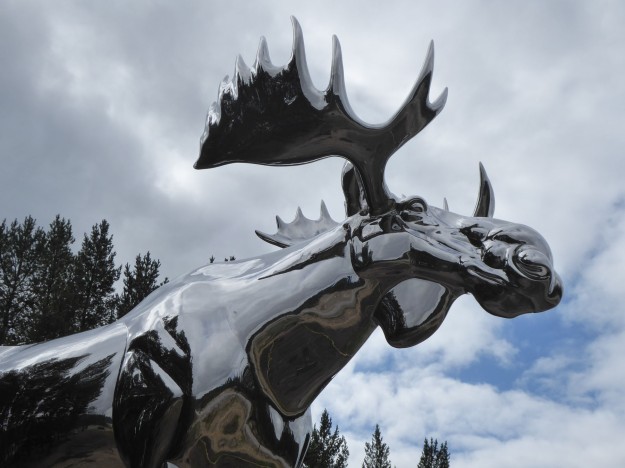 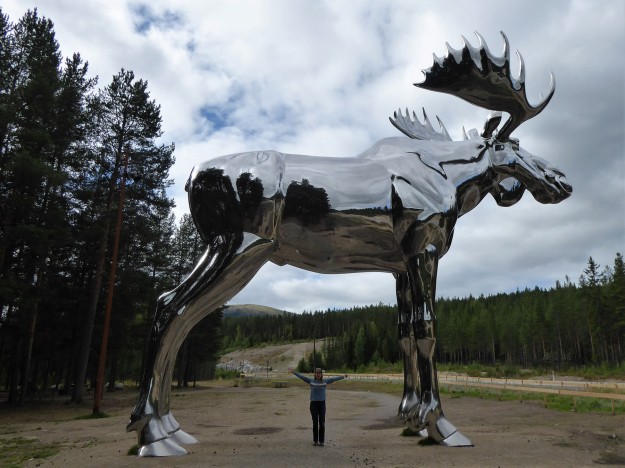 The following morning we followed a long, flat, smooth and (some might say) boring road, making fast progress with nothing but trees for company. We saw two young elk cross the road in front of us, reminding us to take care and stay alert on these stretches.  Colourful, striped elk antlers were hung from trees as artwork to both brighten the trip and act as a subtle reminder of the dangers of migrating elk, a call for drivers to remain vigilant. We stopped in at a rest area to swap drivers, only to find we’d chosen the place where the world’s largest Elk statue, created in shiny stainless steel and standing at a height of 10.3m (and a length of 11.3m), stood proud.  It was impressively formed and provided a dominant reflective presence in the midst of an otherwise solid green band. 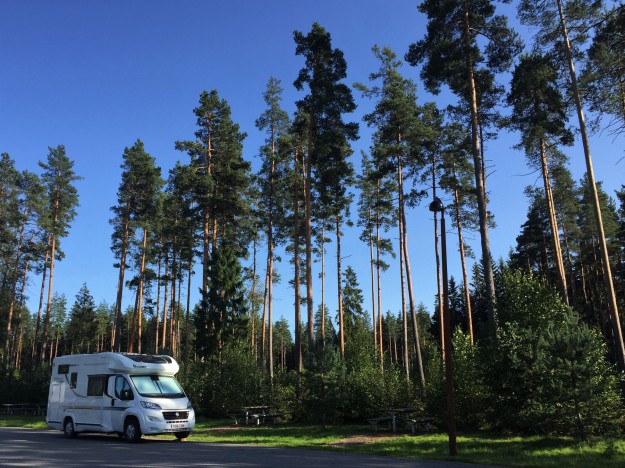 We continued on to another roadside aire at Andelva, where we enjoyed a long walk around the adjacent lake coast to reach a small marina on the opposite side.  We picked wild blueberries in the surrounding woodland and enjoyed a bit of quiet downtime.

Winding roads, ferries, maelstroms, glaciers, rock pools, beaches, lakes and sunsets. Eight quite variable days and over 1100 miles away from our stay in the Lofoten islands we were finally parked up less than 50km from Oslo; we had made good time whilst seeing lots of interesting sights, managing to experience a lot of the central region and also rest well along the way.  We were recharged and ready for a few days in the big city.