We arrived directly from our visit to La Roque-Gageac, and had a bite of lunch in their large, empty car-park as we waited with anticipation.  In winter the gardens are only open from 2pm – 5pm, so we had a short time window of opportunity for our visit.  We paid our entry fee, the first visitors of their quiet day, and walked through the small gift shop into the gardens under deep blue skies.  The warm light of the afternoon was perfect today for seeing the wondrous gardens. 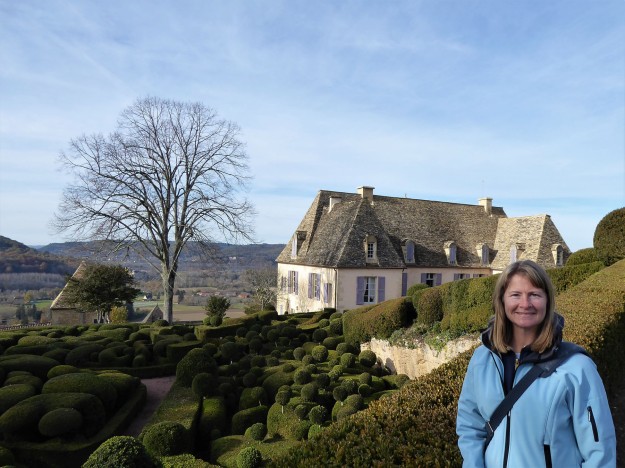 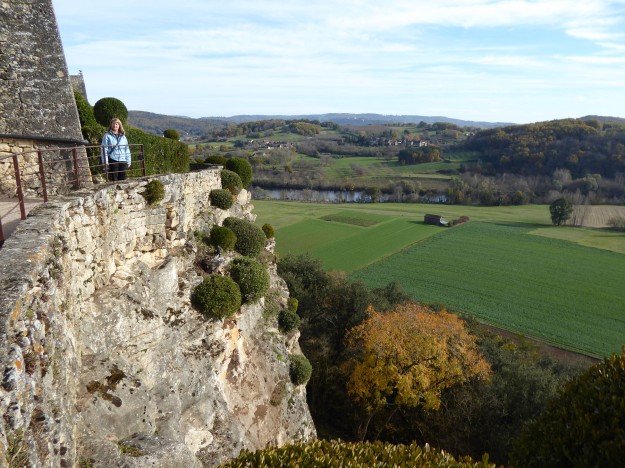 Opened to the public in 1997, Les Jardins de Marqueyssac were created from over 150,000 box hedges, all delicately sculpted and tended to form intricate curves, spheres and spiral patterns.  The château sits in the heart of the main displays, but the wilder, more natural woodland stretches behind with over six kilometres of paths to wander.  We watched some hedges being diligently tended, with string lines and scissors, by the neat, careful staff, ensuring no stray twigs or leaves disturbed the complex forms.  We had seen many photos of the gardens before, but had somehow not really expected to find the same exquisite views so easily discovered and recreated.  This was one living, visual attraction that does not suffer change with the seasons, but remains a constant, evergreen landscape. 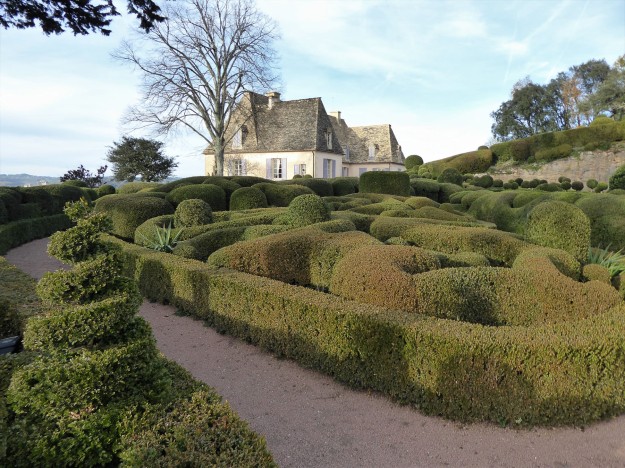 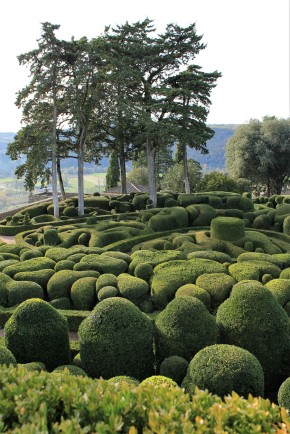 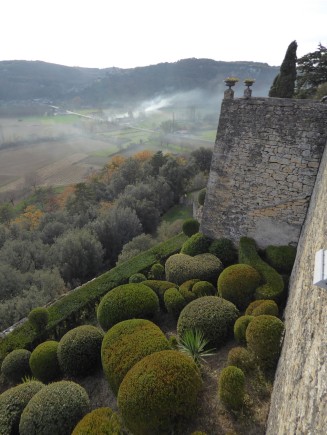 A small nature display and aviary form a part of the gardens, but the hedges take centre-stage.  We approached the 19th century grand château, passing by several peahens and peacocks lazily mooching around the grounds.  Some time and money has been spent on the renovation of three rooms internally, but the main focus since opening has been on the detailed restoration of the gardens.  After a leisurely look into the beautifully-presented rooms, we left by the rear door of the château to be faced with square hedges cut at various angles, like a box of giant green lego pieces had been scattered loosely in the lawn.  Nicky suggested that they looked more like enormous Weetabix.  We walked on, up a steep, cobbled path lined with lavender and sage, rising enough to now have a wonderful overview. 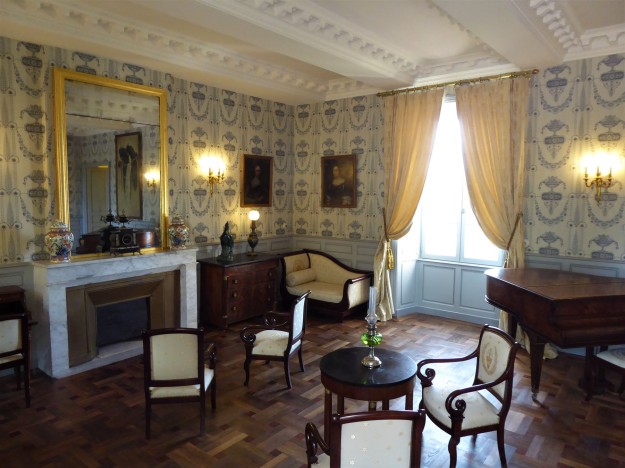 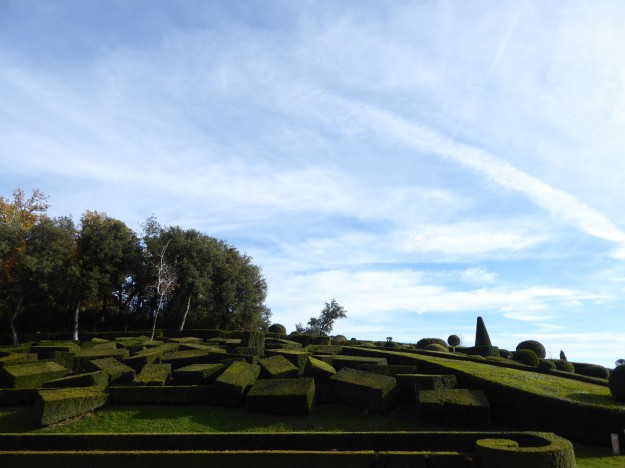 We visited the recreated skeleton of dinosaur bones found during works in the gardens, now displayed behind glass in a purpose-made pavilion.  We enjoyed extensive views from the stone wall and tiny terraces out over the Dordogne valley, soaking up the welcome heat from the afternoon sun.  Following the named ‘cliff walk’, we headed deeper into the woods, passing timber archways and steel bird sculptures.  We reached a high-railed platform, from where a Via Ferrata route around the lower cliff-face begins, accessible under a separate ticket, but it was not open at this time of year.  We passed many hanging fantastical paintings scattered around the forest trails, of fairies and elves, dragons and otherworldly scenes, that helped create a sense of magic to the simple woodland surrounds. 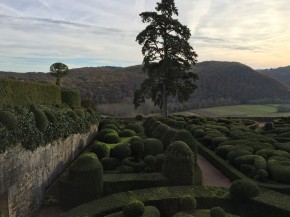 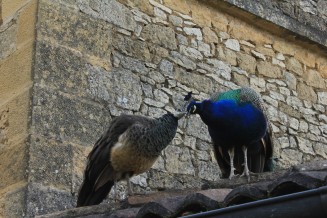 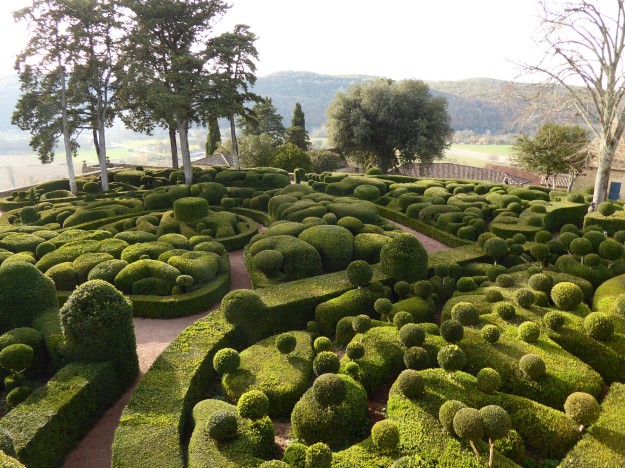 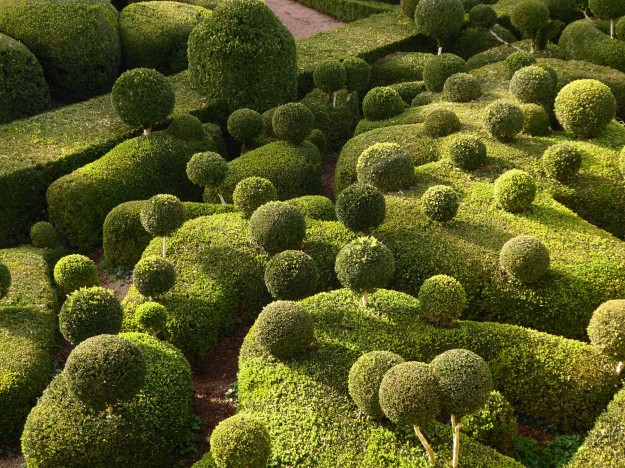 We saw a few wild roe deer bounce past in the extensive woodland beyond the subtle garden fencing.  We passed a wishing well and a few small waterfalls, gurgling more like a water feature in a large garden.  We reached the wide Belvédère viewpoint, a protruding balcony set 130 metres above the river, and paused here a long while to enjoy the extensive 200 degree panorama from the recently visited La Roque-Gageac right around to Beynac, another Beau Village on the horizon.  We watched large black birds circle in spirals above the valley as we breathed in the view, again smiling at our fortune of having arrived here on such a good-weather day.  We spoke briefly in French to some ladies whom we later found out were American.  Their first words spoken in English to us were an apology for Trump. 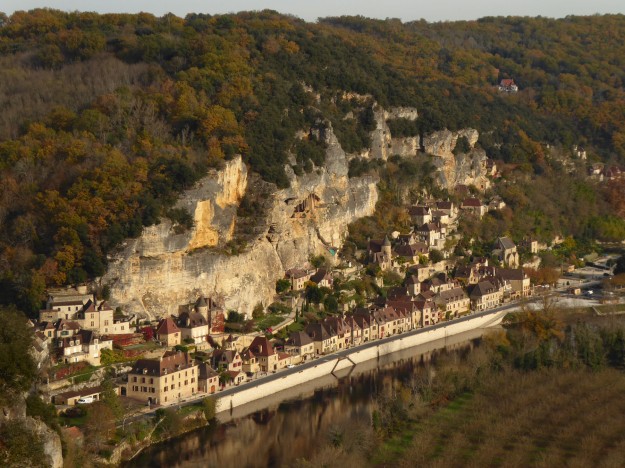 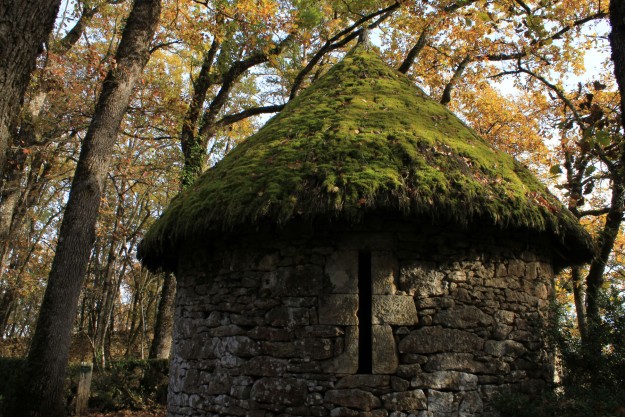 Thick moss grew haphazardly on the thatched conical roof of stone pavilions, making them blend into the thick, deep woodland setting.  Each twist of the path seemed to reveal something new, a different installation, painting or sculpture.  We reached a play area where there were ground sculptures of grotesque and comical heads, looking like they were emerging from the deep leaf cover.  Running beside and over them was a large, long tube of stretch elastic, a tunnel walkway suspended through the trees providing an interesting means of viewing the woodland spaces from above.  It was most likely meant as a play-thing for children to run through, but today it just had the big kids playing, to the humorous, head-shaking disdain of more sensible visitors who passed by.  They wished they could bounce like us. 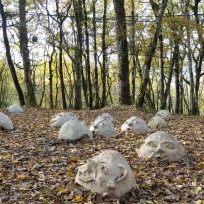 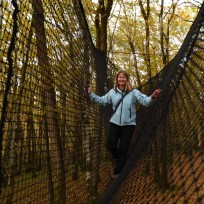 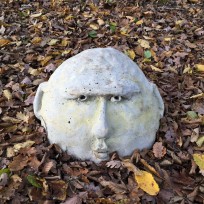 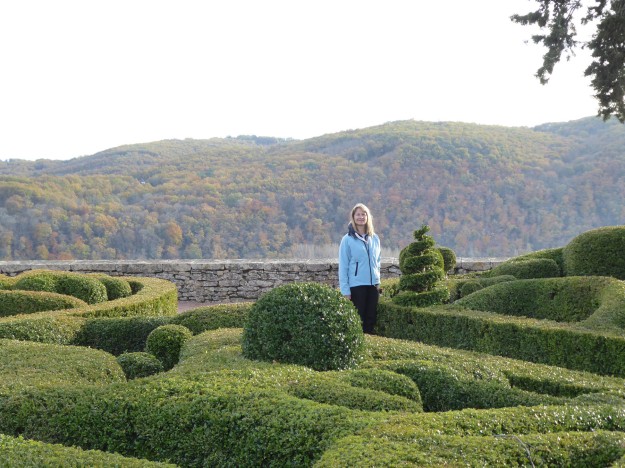 Whilst we had been very lucky to have arrived on a stunningly clear blue-sky afternoon, we still felt that we would have enjoyed our time in the gardens whatever the weather.  The château was quite lovely, the shapely box-hedge displays did not disappoint, and a lack of contrasting floral colour did nothing to detract from the experience.  This was one of the very few places we have paid into where we came away thinking that they had undercharged us for the privilege of visiting – in England, the entry fee would be at least double the €9 we paid.  It felt like incredible value for the time, effort and skill displayed in the topiary displays, and was likely worth it for the hilltop setting alone, with the easy, autumnal beauty of the wide Dordogne valley sitting silently below our watchful gaze. 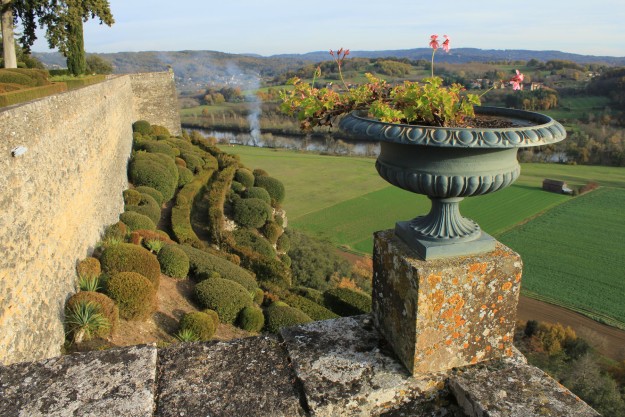 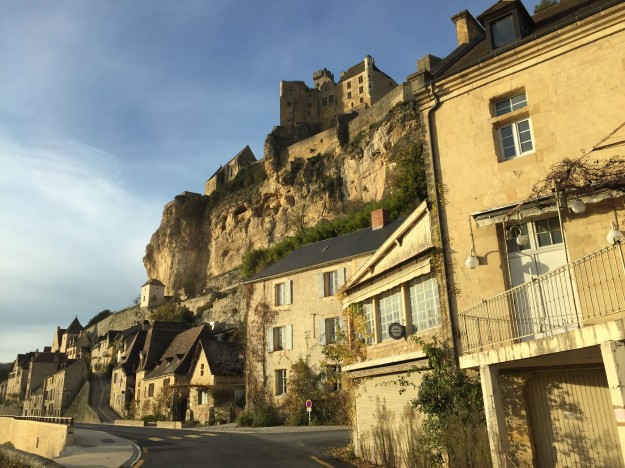 We finally left the magical gardens and thought again of staying locally, but hadn’t been too impressed by the aire.  So we drove through the Beau Village, Beynac, under the shadow of its dominant castle, but didn’t stop to visit as we were a little jaded from the recent near-constant stream of stunning historical villages.  Instead we moved on to stay at another medieval village on the river, Saint-Cyprien.  Here we decided to stop all of our directed and deliberate sight-seeing and take a well-earned break, sitting still for a few days to properly absorb all we had recently seen.