Our final days in Denmark  – A city visit to Odense before returning to Jutland and driving to the island of Als, to spend a few rainy days near the town of  Nordborg.

From Fyns Hoved we drove to the outskirts of Odense where we glamorously parked up outside the closed gates of a large caravan store in an industrial estate.  It was an aire provided by the store, and proved to be a decent, flat and quiet place for a stopover.  Its proximity to the centre enabled us to browse the store in the morning and then easily tootle in to visit the city, only 6km away.  Odense is best known as the home town of Hans Christian Andersen, famous purveyor of many now-classic fairy-tales and some less famous but no less literary plays, novels and poems.

The city was in the midst of some major changes, so navigation was complicated due to several closed roads and rerouted pedestrian walkways.  A motorway once ran through the centre and this was in the process of being replaced along its entire length by a far-reaching masterplan that incorporated pedestrian routes, cycle paths and parklands.  We found the carnage was also exacerbated by the Odense marathon being underway, with marshals, runners and spectators blocking central roads.  We stopped and cheered on a few competitors as they struggled by. 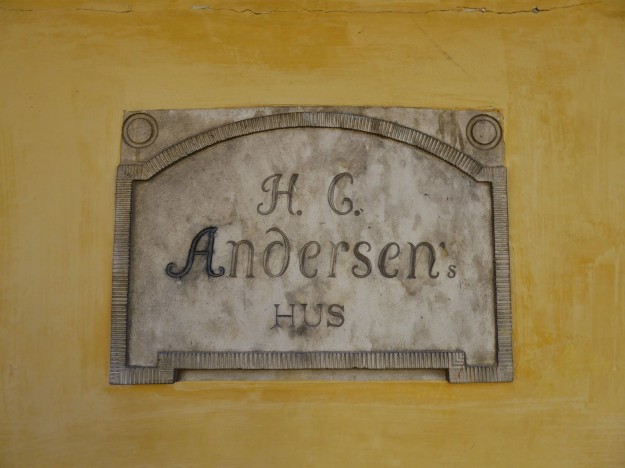 The hoarding for the construction works was clearly planned to be in place for quite some time, as a lot of thought and design had gone into making it interesting for passers-by.  A row of individually printed boards denoting the long history of Odense lined one side, beautifully illustrated in a graphic-novel style and filled with interesting local stories and humorous anecdotes.  Other hoardings had photographs, artwork and paintings applied, all related to this ancient city.  We followed the diversions past tall brick churches and narrow cobbled lanes to find the centre. We passed St. Albans Priory, where the last Viking King Canute IV was murdered by peasants during a revolt in 1086.

We reached the H.C. Andersen museum building, where we saw the plans for the extension of the museum in his honour, designed by Japanese architect Kengo Kuma, and set to be completed at the same time as his Tokyo Olympic stadium in 2020. We walked wistfully around the colourful back streets, passing the exterior of Andersen’s rather humble home, one of many small cottages with bicycles set against the front wall.  With no particular plans, we kept walking, finding a statue of HC Andersen standing in a beautiful small park in front of St. Canute’s Cathedral, on neatly tended grassland with a formal garden still bright with flowering plants. It was a wonderful town to explore. 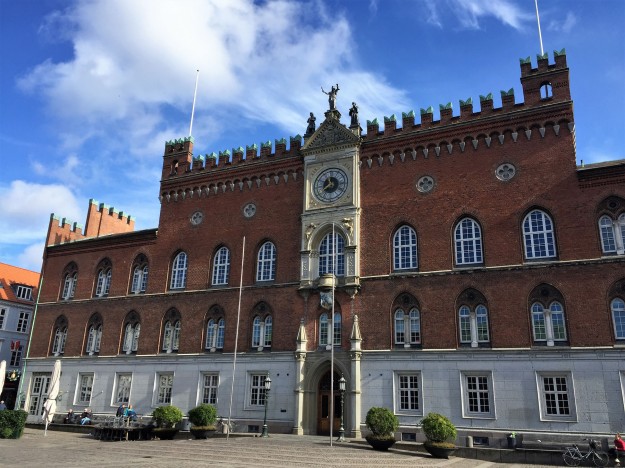 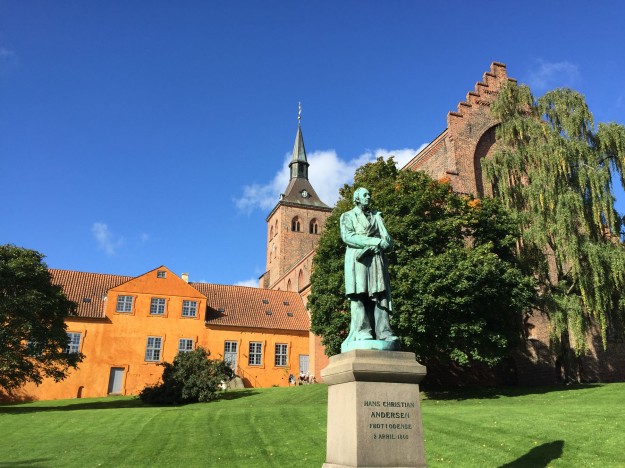 From Odense we drove west, leaving the island of Funen across another tall suspension bridge to make our return to the contiguous shores of mainland Europe, on southern Jutland.  We turned south at Kolding and followed the east coast towards Germany, before turning off again east to cross over to the island of Als at Sønderborg.  We made our way along to the north coast through the main town of Nordborg and checked into another off-season ASCI campsite on the beach at Augustenhof.  We were hoping for a few nice, sunny days to end our time in Scandinavia, but no such luck. 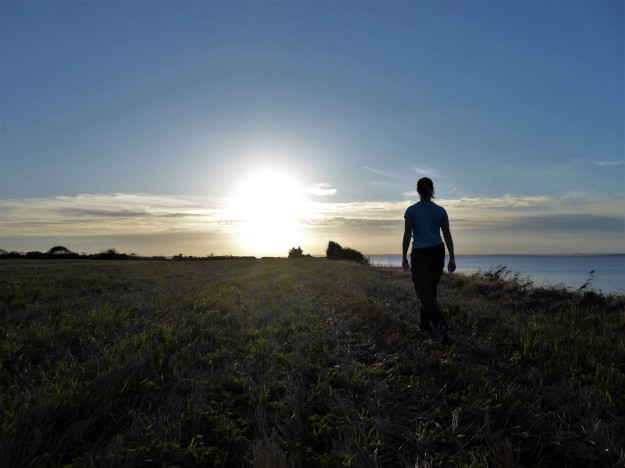 There had been heavy rain the night before, and who knows how many days before that, and turning off the gravel road onto the grass field to reach our designated pitch, we got only a few metres before Benny sunk into the grass and stalled, stuck fast.  We tried in vain for a few minutes to drive out, using mats and chocks as leverage, but to no avail.  Our would-be (if we could get there) German neighbours came to the rescue, fussing around, chatting and gesticulating loudly in German, as they organised an instant rescue party with all nearby fellow campers.  With borrowed heavy door-mats under our wheels and eight welcome volunteers rocking Benny from the front, we finally managed to pop free of our muddy prison. 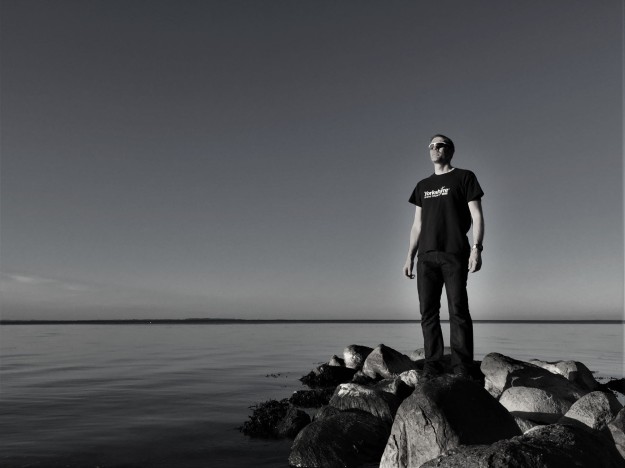 We were wary of trying again to reach the pitch, but optimistically decided if we kept our speed up all would be fine, so we did and this time we managed to get across the sodden grass to the much harder-set pitch, finally settling in for a cuppa.  We couldn’t shake the thought that we’d be facing a similar issue when leaving our pitch, as there was nothing but more rain forecast for the coming days.  We were graced with a short break in the clouds and walked a length of the local beach, watching fishermen stand out in the shallow sea as the sun began to set.  Everything was suddenly calm and still, the sea a reflective silver plate lightly dimpled with tiny waves.  We posed on rocks for arty photos, happy to experience a rare dry and windless moment.  We returned to Benny and soon after the rains exploded again, so we settled in for a blustery battering with the accompanying soft patter of rain on our roof.

We awoke after a night of broken sleep, filled with partially-remembered dreams of flooding and sinking, to be greeted with yet more torrential rain, and gusting harsh sea winds rudely rocking us.  After a few hours it finally gave up and the clouds dissipated, so we booted up and walked into nearby Nordborg town centre, along empty roads.  Many of the streets looked dead, with shops closed down, forgotten or unloved, and the town looked close to commercial death. We stopped into one bright shop that was the exception, a book and arty shop that, whilst it was selling lovely things, we couldn’t see a happy future for.  Or maybe all the recent weeks of constant rain and grey skies have washed away our cheery optimism and clouded our outlook with a muddy nihilism. 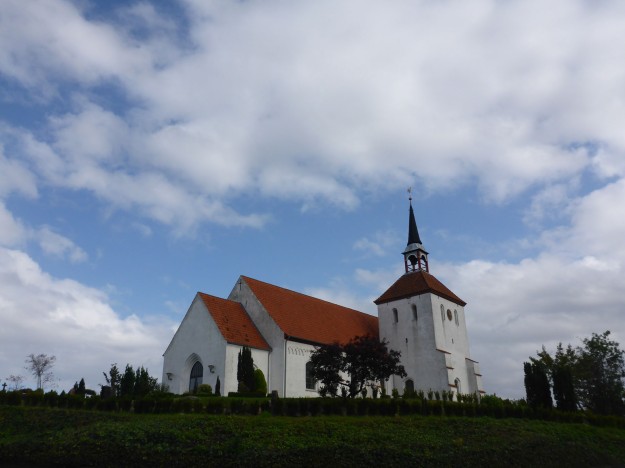 We walked through the town, seeing the church, the castle that is now a posh school, and a stand-alone tower, Nordborg Vandtårn, standing tall in a residential area. Despite their different shapes and usages, the construction materials for each were all very similar, with stone plinths, white rendered walls and red tile roofs throughout.  We ate lunch at a picnic table in a small park by a lake then wandered back home the same way.  Our walk was slightly over 10km in total, a nice stretch of the legs given how much we’d been confined to Benny recently.  We passed another night under a thick blanket of mottled cloud, like a dirty dishcloth, that occasionally wrung itself out over us. 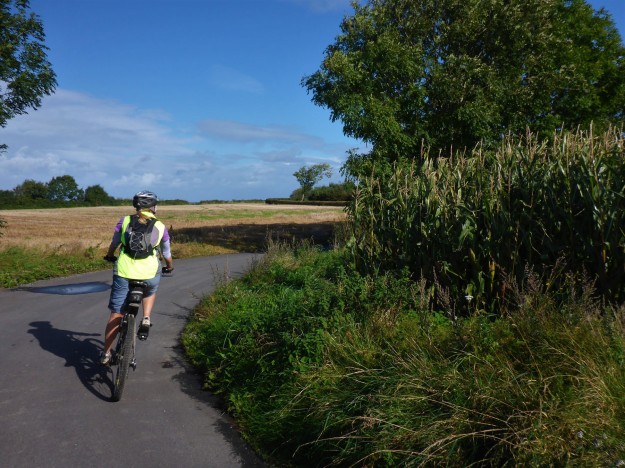 The following day, with rain mostly holding off, we cycled a lovely 36km on empty country roads or off-road gravel tracks, getting totally muddied up on the latter.  We rolled past Havnbjerg strand where we paused for a moment to walk on the stony beach, contemplating a quick dip.  A sole fisherman stood staring out to sea, examining the waves. The countryside rolled along, with little hills and fast downhills, looking all the while just like the backroads of Northants.  We saw road signs for The Universe, and with our curiosity unleashed we finally tracked it down, to discover a theme park and adventure centre with some interestingly-sculpted building.  Entry was by appointment only, so we could only look from outside the fence as bussed-in gangs of school kids entered to explore the wonders we imagined lay within. 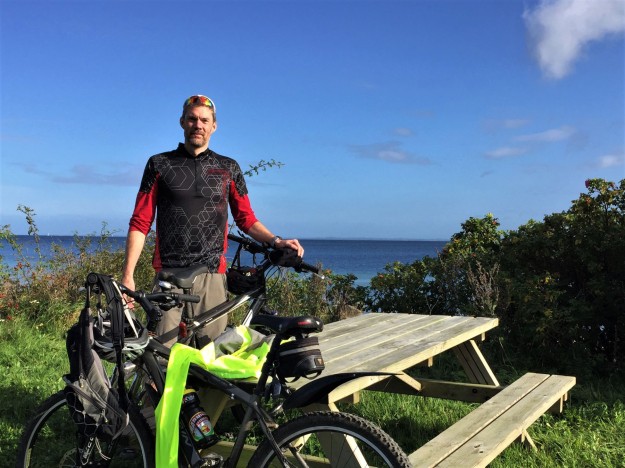 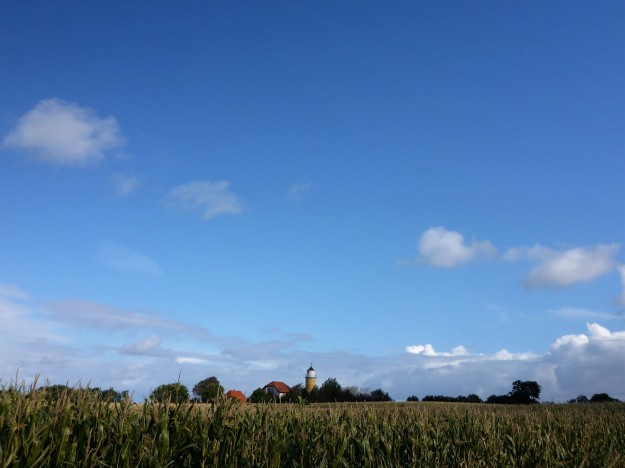 We returned through the town of Nordborg and continued straight through to reach another area of the coast beyond, before following a small track back along the edge of the beach.  This led us around to reach Lejrskolen Fyret, the lighthouse we could see from our campsite but couldn’t quite work out how to walk to.  It looked like the ancillary buildings adjacent were in use as a small local school.  We rolled back around to camp, and later we got told off like naughty school-kids for hosing down our muddy bikes over rain-filled puddles on the grassy site, as if the small amount of extra water we added was somehow the primary cause of the extensive flooding.  Duly chastised, we retreated to Benny and raised a few glasses to say our farewells to wonderful, wet Scandinavia – tomorrow, Germany.