We packed up our comfortable pitch in Camping des Sources, ready to move on.  We were heading home, but we had one more special place to visit.  The day was again stifling, and Carpentras hit newsworthy record temperatures as we passed through.  Skirting south of Orange, we dropped down the valley and crossed the Rhône, before heading north through beautiful pastoral land scattered with yellow gorse and bright flowers.  Arriving in Vallon-Pont-d’Arc, we clambered into Camping Rives d’Arc, picking out a spot with easy access to cooling showers and the obligatory pool. Once settled, we walked to view the stretch of low-flowing river commandeered by the site, dreaming of a dip.

Even parked in shade, our internal thermometer in Benny was pushed beyond its maximum 40°, and the dash reading said 44°.  Walking became a chore, the smallest effort inducing a flood of sticky sweat.  We had thought the stillness in the air a curse and longed for a breeze, unaware it had become so hot that it would bring no respite.  With the air at 44° it’s like sitting in a sauna, and when the freak North African winds blew it was simply a hairdryer blasting on our skin; a hotter, burning sensation that only increased discomfort.  Shade did little to help; the only place we found to hide was underwater.  We abandoned all plans of exploratory runs or long cycles and instead we sought the cool parts of the campsite and cold swimming pools to hide away in.  Sightseeing would just have to wait. 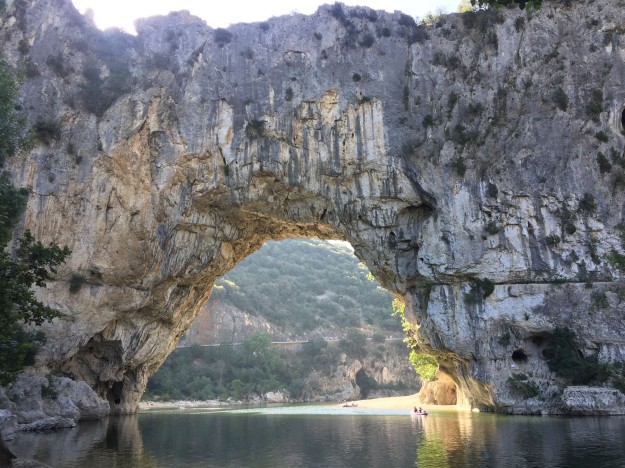 After the success of our morning run at Gordes, we considered an early run to Pont d’Arc, to avoid the heat and the crowds, but there was no path and the road was not pedestrian friendly.  So instead we caught the first available free navette the 4km to the Pont d’Arc, it already 32° at 9am. A short walk led us to a stony beach, where a large bussed-in group had gathered to snap photos.  We waited a few minutes until they dispersed, then changed, stowed our gear and got into the water.  The river was much warmer than expected, almost too hot, as we swam under the famous arch to the opposite side.  We climbed out on the beach, enjoying our new perspective.  Our original side was in deep shade but this new face was lit brightly by the morning sun, showing off incredible detail on this 59m high and 34m wide natural archway over the Ardèche. 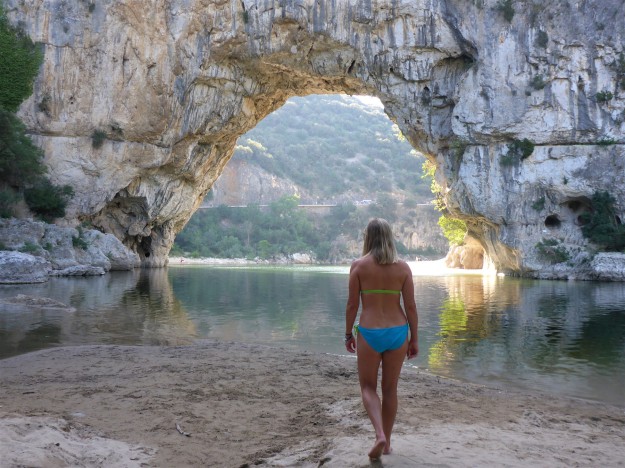 Many tourists were already photographing the arch, all getting the same standard picture.  But standing on the bank was such a limited perspective.  it was so much more interesting from underneath; pitted, scalloped, full of holes and caves and fissures.  Bats hung in darkened corners, birds soared underneath.  The more we looked up and examined, the more interesting it became, the more secrets it revealed.  We noticed that few of the steady stream of kayakers paddling through were taking the time to look up, missing much of what was fascinating about it.  We climbed out at one side and stood a while examining the rock, it all melted and jagged, like splashes of water frozen in time.  Leafy plants hung down defying gravity, adding splashes of dark green to the black and white honeycombed underbelly.

We swam a few more lengths under the arch, taking in new features each time.  Now, approaching 10.30am, the site was filling up and being swamped by rowdy kayakers and day-visitors – we were glad to have had some quiet time to explore earlier, and it was time for us to exit.  The bus back didn’t appear as scheduled, but from nowhere we were offered a lift by a guy in a battered red van, an interesting Spanish guy, now living in France, who teaches kayaking in the summer and skiing in the winter.  He knew everybody along the short route, honking and waving as he blasted his rusted old van around the narrow cliff-lined road.  He dropped us off outside the campsite and sped off with a smile and a wave; proper gent.  We did our usual trick and hid underwater or cover for the remainder of the day.

After another night featuring several cold showers and little sleep, we headed off, and soon crossed into the Parc naturel des Cévennes.  We were deeply impressed with its natural beauty on the way south, and nothing had changed to dissuade us.  We took the free motorway to Saint-Flour, then west into the Parc naturel régional des Volcans d’Auvergne.  This was another landscape of calm, understated beauty, reminding us of various parts of England. It later transformed into vast areas of tall rugged pines, packed tightly together, straight and tall and opaque.  A further change brought open countryside with rolling green hills, more lush and green than the yellowed and scorched grasslands further south.  Small square patches of woodland, neat circular coppices and single trees added height to the landscape. Everywhere neatly cut hay was wrapped in coloured circular bales like giant cheeses. 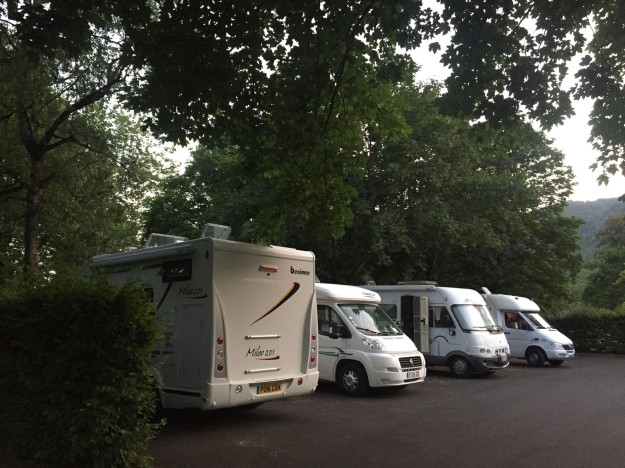 We could have made it home on our final day, but it would have been a long and tiring drive with a 9pm arrival, so we decided to cut our drive short and fit in one last overnight stop.  After passing through a few ski resorts and around three hours from home we stopped in Vic-sur-Cère.  It was much cooler here, relatively speaking.  After dinner we enjoyed a late evening stroll to watch a busy, animated boules game in a local park and to see the central village.  It was an unassuming place, quiet and pretty, like much of rural France.  We were glad to have stopped, both to see this community and to ensure we arrived back home rested, as was our goal, rather than drained after a long, hot drive.

The morning hours would see us home, back to our normal home life, for a few weeks at least.  We have Home Exchange guests arriving in late July and we will vacate our home for them to enjoy as we head away again to seek out new adventures in Benny.