After leaving Lisbon, we headed south in search of solace and tranquillity.  We found it at the end of a long, dusty, unpaved road.  With a rough, bumpy and difficult approach leading along the sea front, this quirky, run-down but vibrant village was once a beach resort-of-sorts.  The surroundings consisted of small beach-fronted restaurants that spilled down onto the sand, punctuated with palm trees.  Many were closed up at this time of year, but a few remained open to mop up the small dribble of visitors still managing to find themselves in this out of the way place. 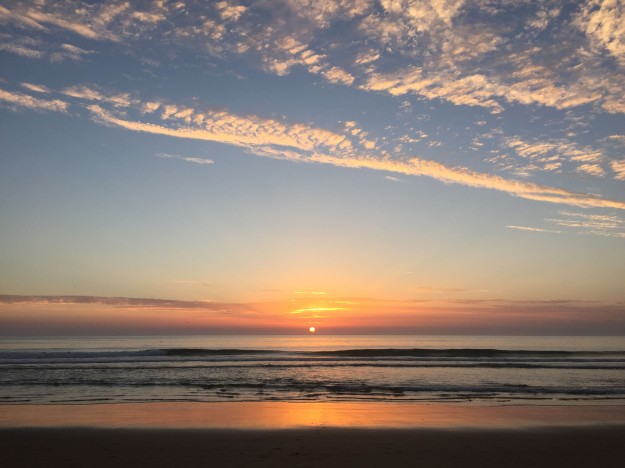 We parked up with a sea view out the front window, our nose less than a metre from the edge of the beach, facing due west.  From here we enjoyed the repeated pleasure of incredible sunsets, perfectly visible from inside Benny, or from just sitting quietly outside overlooking the water.  Occasionally we would walk down to the water’s edge to watch the reddened waves roll in up close, and listen to their gentle lapping.  We luxuriated in long, slow days on the sand, only metres from both our motorhome and the sea, and the weather remained at a constant 28 degs C during the days of our stay. It was a great, quiet spot to unwind fully. 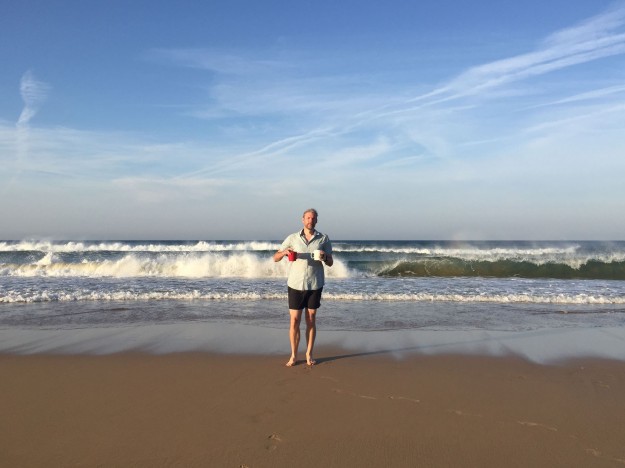 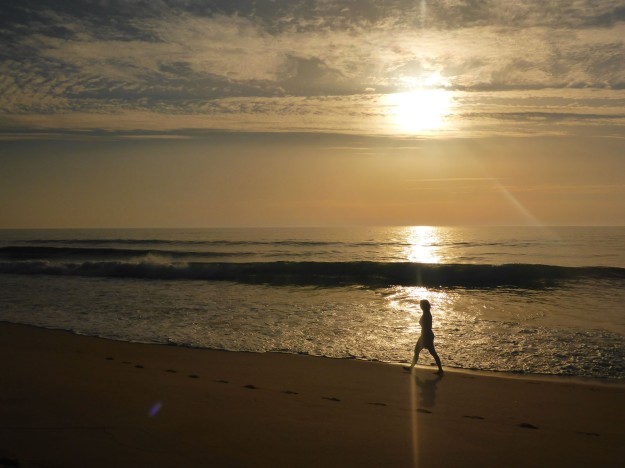 One morning we decided to exercise our restless legs and we walked along the incredible extent of beach, over five miles long.  We discovered that, a mile or so from where we were parked up, a specific stretch of the sand was designated as a nudist beach. We passed quite a few walnut-skinned sun-worshippers taking full advantage of this designation, as they had for many years according to the evenness of their tans.  Beyond here, very few people had made the effort to reach this end of the beach, so we enjoyed a long stretch of beautiful golden sand all to ourselves.  The high cliffs set behind the beach were yellow ironstone, similar in colour to Northamptonshire stone.

It was in Fonte da Telha, finally, that we enjoyed our very first meal out, some 55 days into our trip.  This premier event took place in the ‘Cabana Bar’ on the seafront.  This was a great, quirky little bar with friendly staff and a real laid-back vibe. We had a burger and fries with a large beer each for €20. Then we had an additional beer each to celebrate the rarity of the occasion; quite the luxury for us. 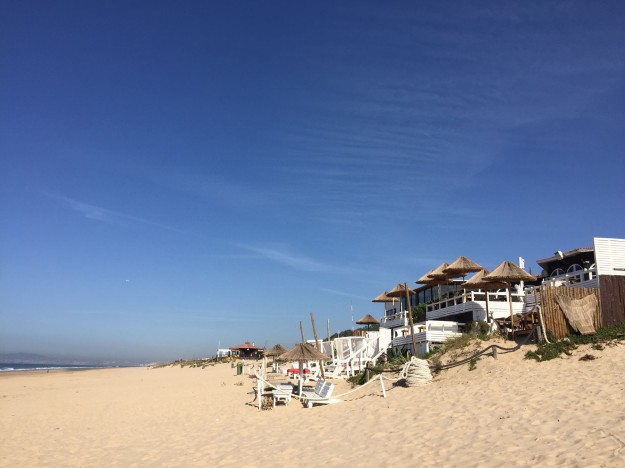 The next day we walked to a local shop, on Sunday, to buy bread and wine, like a humanist communion.  It was 28deg C, the day before Halloween, and much too hot for sunbathing.  The waves were also too large for swimming.  On our return, we watched surfers in the water, and one sole stand-up paddleboarder riding a few waves, showing great control on such a large board.  We overcame our reticence and joined them in the water sans board, splashing and jumping in the large waves, our joviality punctuated occasionally with a longer swim out beyond the break.  The only downside of this was the loss of my favourite goggles after momentarily letting down my guard and falling foul to a sneak attack by a rogue large wave, just as I was leaving the water; a slightly disappointing end to a day’s play in the surf, and a search of frothing waves turned up no sign of them. 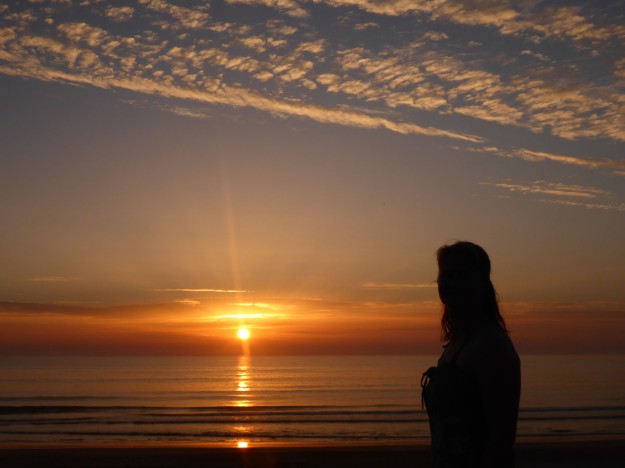 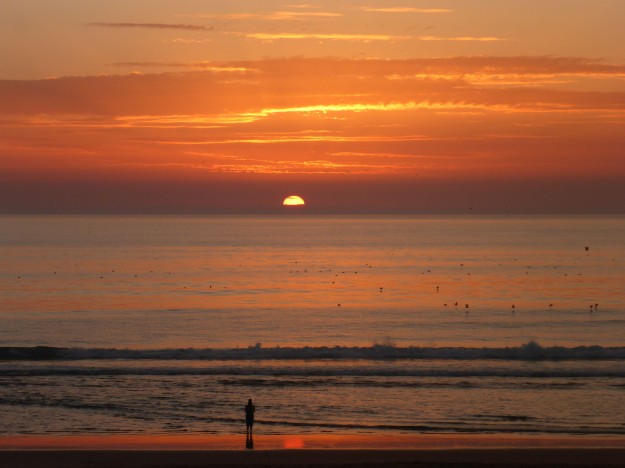 Although we spent only three days and nights here in total, time slowed down and we became the quintessential beach bums.  With us fully recharged and relaxed, our wanderlust grabbed us again and we decided sadly we needed to move on, further down the coast to another beach resort.  It would be all too easy to linger, but there’s always some place else to see.

After a long drive south, racking up bills on the toll roads with abandon (€14.50 over two separate charges for this stretch) we found ourselves back in civilisation, of sorts.  The aire just outside the town of Porto Covo was quite full, with around twenty motorhomes parked up on the clifftop, enjoying the wonderful views to the sea. We joined them, finding a spot near the edge, before having a quick walk to the edge to look over our new local beach. 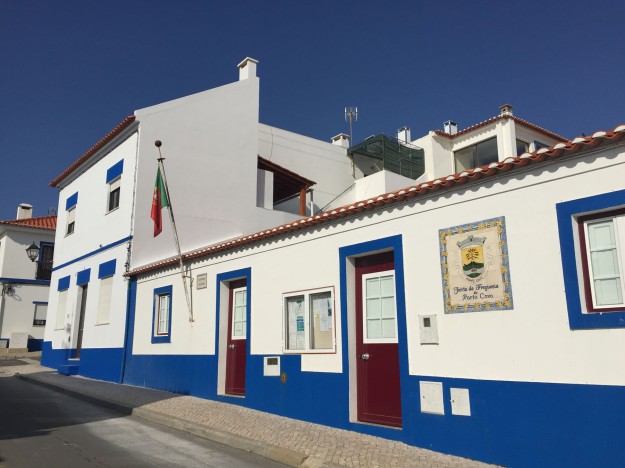 After settling in, we walked into town to have a quick look around.  It was silly hot, around 25degs but sticky, humid and draining, so we walked slow, exploring the tidy streets and neat squares.  Porto Covo was an absurdly picturesque village, with most buildings painted in a uniform white with blue trims to windows and doors.

We relaxed on our new local beach to read a while; my third book in six days now underway.  Again we watched the huge waves crashing wildly against the sand, enjoying the power of the ocean, and let ourselves be battered by them. 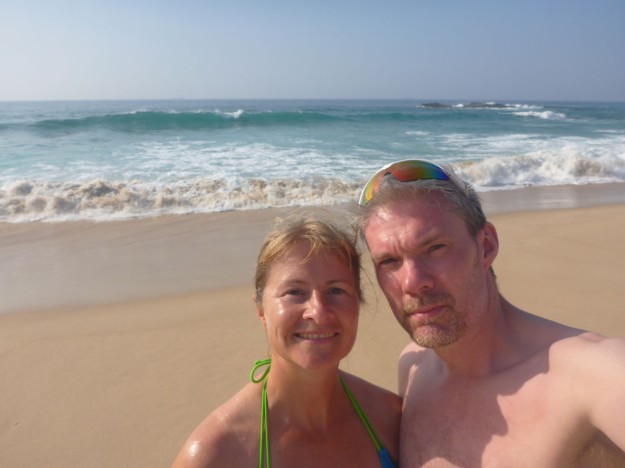 The next morning we decided to cycle south along the coast, exploring other coves and quiet beaches, with the hope of locating an idyllic one to claim for ourselves. From the centre of town we descended and forded a small sea inlet at a point where it was a miniscule river, then had to endure a steep, rocky climb back up to the neighbouring cliff top.  Dusty gravel tracks kept us close to the coast from where we could see all the nearby coves and sandy bays, enabling us to keep an eye out for which might become our beach spot for an hour or two.

We were initially attracted to a nice sandy cove and cycled to the edge of the beach, before having a walk about to explore the area.  It was entirely deserted, all but a few footprints from an earlier dog walk. Swathes of sandy beach were interspersed by jutting rock formations segmenting the beach into what would be several separate areas with the tide higher.  Our idyllic spot was shaping up nicely and we quickly changed from bike to beach clothes, yet when we returned to the bikes a noisy campervan had driven down to the edge of the grassy bank directly behind the spot we’d chosen, ruining our tranquillity and privacy.  With this beach no longer to ourselves, and with a sudden weather change and the sky clouding over like a dark grey sheet, we decided to continue our cycle. 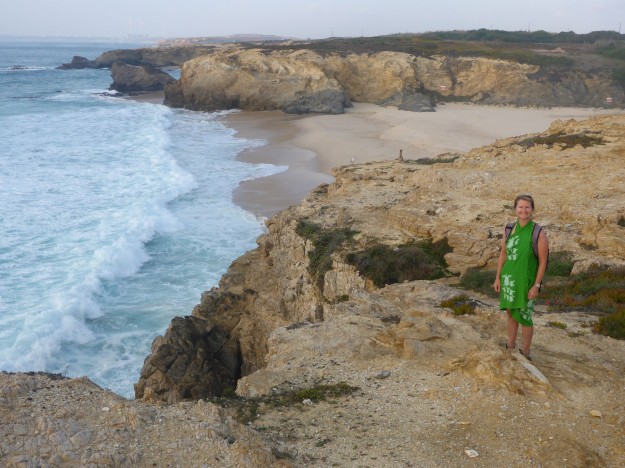 As we got back onto the coastal path, we were greeted by more ominous dark rain clouds overhead, both in front and behind us.  It was not to be a chilling beach day after all, so we called short our cycling explore and returned to Porto Covo to relax for the afternoon.  Later had a brief spell on our own local beach, having fun getting battered by the powerful Atlantic waves as we played in the surf, before sitting on the rugged clifftop overlooking the bay and reflecting on a lovely couple of days in the company of beautiful Porto Covo.