We said our sad goodbyes to all at the WorkAway in Solbjerg, before driving off to explore the north of Denmark.  We headed north, first through Aalborg, before turning left to reach the west coast at Løkken.  This stretch of coast was quite built-up and spotted with holiday cabins and campsites, obviously a popular holiday destination for locals.  With little in the way of aires or wild-camping opportunities, we decided to continue our recent lazy indulgence by checking into an ACSI registered place a few miles south of Løkken, where we had most of the site all to ourselves. 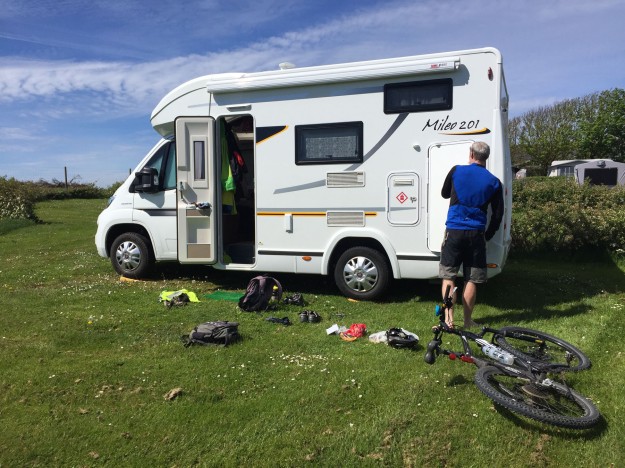 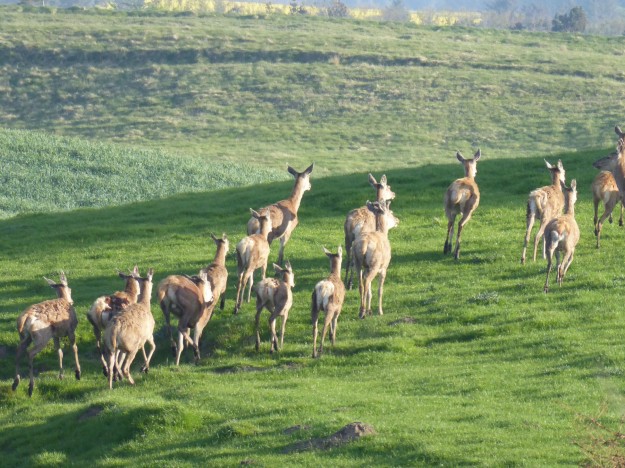 We slowly tidied our van, sun-bathed and read all through the afternoon, having no particular plans to be anywhere.  Later in the afternoon we undertook a quick walk to the local beach, which was not the 700m away that we were told by reception, but turned out to be 2.4km distant.  It was a lovely, if longer than expected, and quiet wander to the wide stretch of white sandy beach that was so flat it doubled as the local coast road.  We saw several cars driving along on the hard sand, with a few others parked up where a group of paragliders were testing their rigs and harnesses, readying for take-off.

We walked a little way along the beach, watching the test flights of the paragliders with their colourful parachutes pulling hard in the strong beach wind.  There were several motorhomes on the sand and we considered whether overnighting was possible here, but later saw signs prohibiting it.  We returned home the same straight path and enjoyed a lazy evening overlooking our local lake with swans and deer in residence.  The next morning we decided to stay put another night, enabling us to cycle up the coast to visit an abandoned lighthouse in a drifting sand dune, at nearby Rubjerg Knude.

The sun was out today, a bright and clear sky with few clouds, although the ever-present wind was still keeping close company. We cycled through clusters of holiday camps and row after row of similar timber cabins, most of which were empty but looking primed and ready for the summer influx.  We had a few attempts to forge shortcut paths through the dunes, but the dotted lines shown on our GPS turned out to be narrow, deep sandy paths that were all but unpassable on bikes, so we ended up back on the road on each occasion.  We found a short forest trail that we followed through the trees, before we locked our bikes to a convenient tree and continued on foot. 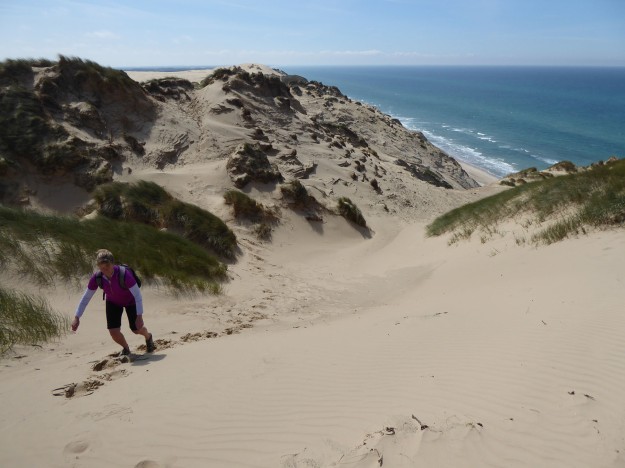 We walked onto the deep, white sand, noted as one of the largest sand dunes in northern Europe.  (similar to the Dune du Pilat we visited in France last year).  There was a huge drop to the beach on the coast, with wild waves crashing into the flat sands below. We were south of the lighthouse, taking a little used route for our quiet approach, with the busier main car-park positioned to the north.  We saw no one else on the way, except for more colourful paragliders passing overhead, until we reached the abandoned, decaying lighthouse that the encroaching sands were slowly swallowing. 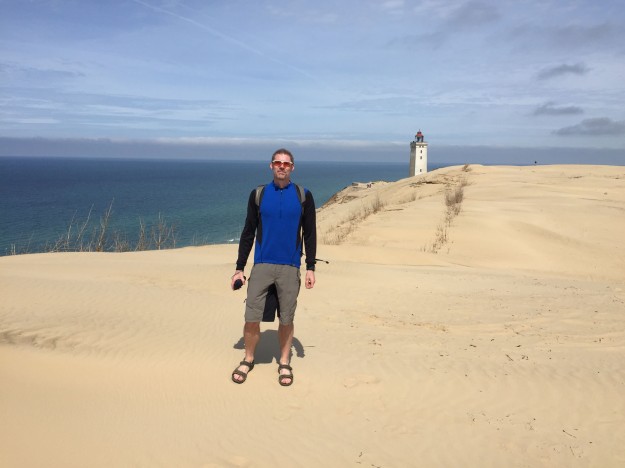 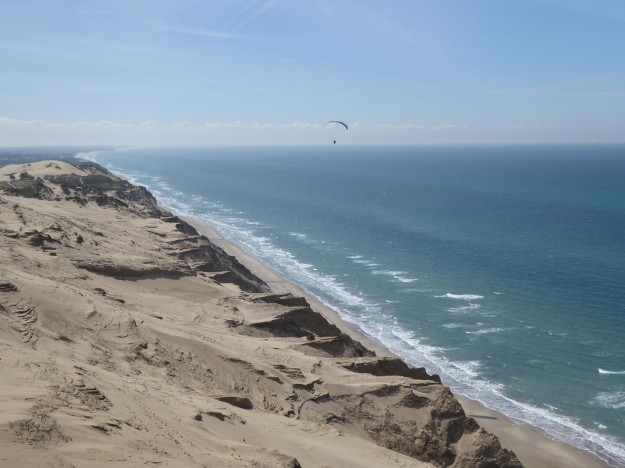 Another outbuilding or tower must have previously stood on the site that was now littered with thousands of individual bricks, looking messy and forlorn.  We climbed the empty shell of the tall, white lighthouse, now with steel stairs added internally for visitors to take in the view. People had utilised the multitude of loose bricks around to write messages or their names in the surrounding dunes, but the overall impression was sadly of neglect and mess. 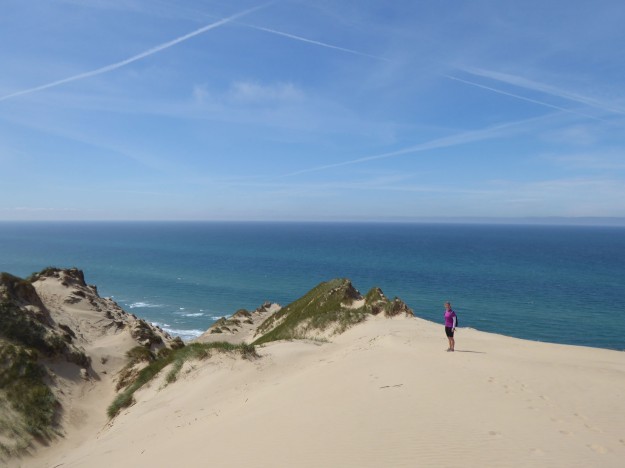 Everything looked much more impressive and grand from a distance, where the clean white dunes dominated the skyline and all human intervention was kept to a minimum.  We ate lunch in a sheltered hollow out of the wind before we returned to our bikes for the trip home.  We varied our route south, finding some forest trails and more off-road tracks that added a variation and additional interest to our 46km cycle. 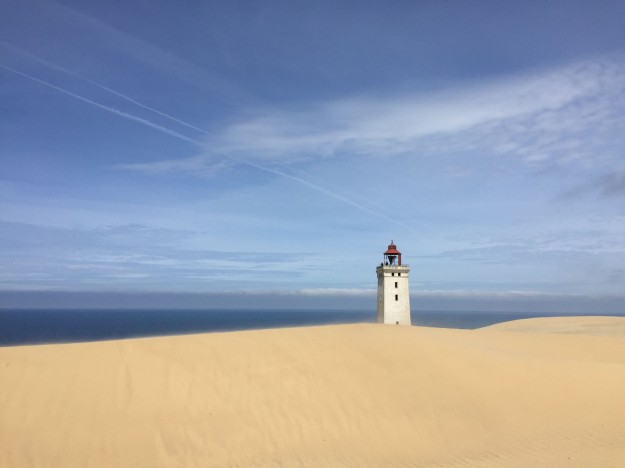 We had planned to follow the coast north, but we had an issue with leaking water on our kitchen floor, so we prudently decided to use a day to return south of Aalborg to visit the only large motorhome service dealer we could find, to see if they could resolve the issue.  After an initial look, they ascertained the problem lay not with the condenser on the fridge as we had suspected, but with the connection to the base of the tap.  They had no suitable replacement tap in stock, but could order one in, so we decided to spend the night locally and revisit the following day. 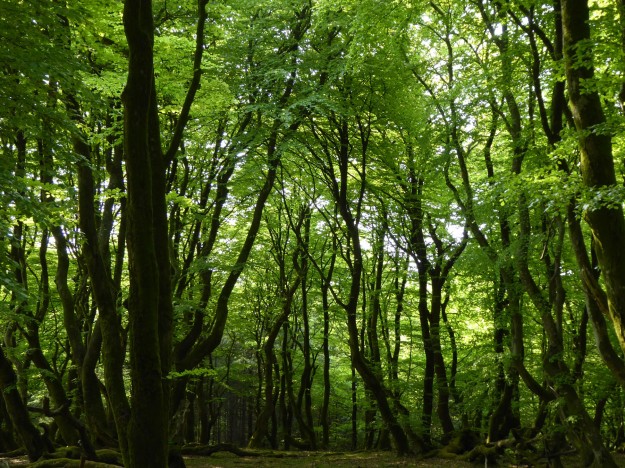 We retired to a spacious aire in the grounds of a large hotel, where we were welcome to overnight for free.  It was on the edge of forests we had previously visited, Rold Skov, so we had an afternoon stroll through the beautiful woods.  The quality of light catching the gnarled and twisted trunks of the old forest trees meant it was a delight to walk through.  We saw many deer roaming silently through the trees, alongside fenced paddocks housing small flocks of sheep with still-tiny lambs in tow. 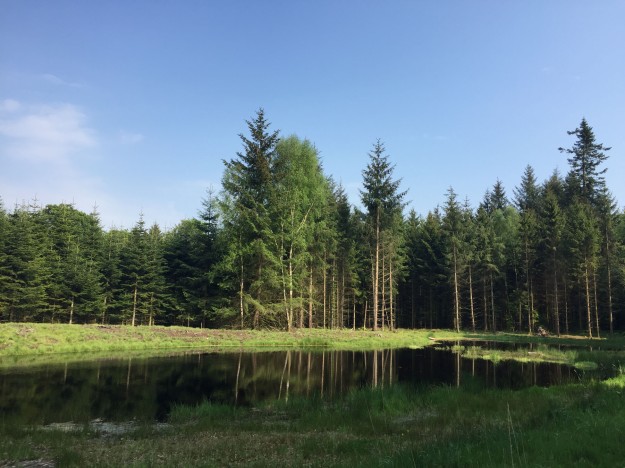 We returned to the motorhome dealer the following day at the agreed time to find the tap ordered and couriered especially for us was the wrong one, and they could only fit it with a proposed bodge-job involving bending lengths of copper pipes and cutting out side panels.  We refused the work and decided to live with the leak until we found a registered Benimar dealer in Norway who could perform the work correctly and under warranty.  We can catch the water in a small tub under the tap, now knowing that it only leaks when the tap is in use, so it is not too vexing.

After our unproductive maintenance detour we headed north again, passing Aalborg for the third time in as many days.  We kept on right up to the tip of Jutland this time, stopping just short of Skagen in the region of Råbjerg Mile; the very north awaits.