We moved on from our visit to Saint-Robert to reach the rural heights of the village of Dampniat.  We had a worrying moment on our arrival, as pulling up at the aire we faced a chain across with INTERDIT in bold letters.  We soon worked out that this was only closing off the large area of the aire on the right, with the opposite smaller side, only large enough for three motorhomes, still available for us to use.  It seemed they were in the dubious process of marking the larger area into specific individual bays, as if the French pay any heed to them when parking.

All services, including free electricity, were happily on hand, so we parked up in the corner, plugged in and relaxed with our heating blasting.  It was set to drop to -2C overnight, so we were glad to have the hook-up, and at our favourite price – thanks, Dampniat.  We had a stroll around the small settlements on the nearby hills before dinner, enjoying great views out over rolling countryside turned red under the setting sun.  The roads were empty the entire walk and only the odd dog barking penetrated the rural silence.  But when the sun went down, it was like a heavy cloak of impenetrable blackness descended everywhere, unlike any we had seen, or more accurately not seen, in a long time.

We awoke to face a bitterly cold morning, with a light frost on the grass outside.  The view across to the village of Dampniat was lit with a bright sun-rising redness, similar to the previous night’s sunset.  The sky was clear of any cloud cover and held the potential for a sunny dry day, so we proceeded with our plan to finally utilise our bikes and cycle down into the nearby centre of Brive-la-Gaillarde, the main town in this region of villages.  We wrapped up warm and set off, downhill through villages and forests.  It was a steep descent, passing by lots of houses but very few vehicles, until we reached the valley floor near the town and the traffic increased massively.  By then, we were rewarded with the use of dedicated cycle lanes so cars were not an issue as we made our way along to the centre of Brive.

We headed straight for the heart of the medieval centre, picking out the tall church tower we could see all the way in.  It sat in a small square, lined by very pretty red-leafed trees that contrasted with the church’s stone. This local yellow sandstone dominated most of the historic centre, with many key buildings being built from it.  The stone lit up to glow when in direct sun.  Away from the tiny, medieval streets, the town centre was bustling with busy shoppers, and we had to be slow and careful picking our way through pedestrians.  We watched long, colourful runs of Christmas lights being put up by men in a cherry-picker, the road through to the central square having been closed to vehicles to allow them to work. Seasonal markets were in the process of being set up, and all felt very festive.

Beautiful stone high-ceilinged townhouses, each with a private gated front garden, lined the grand streets on the peripheral of the medieval centre. We passed them as we looped around the centre, dodging down many small side streets to get a quick impression of the town.  It looked pretty, lively, full to bursting with interesting corners and modern conveniences.  We found the tourist office by the bus-station and collected a few local maps, before heading across to the park that sat adjacent to the river.  It was a neat, leafy park, but the river had the appearance of having been abandoned, forgotten, or at least not particularly celebrated by the town.  The town centre seemed to have turned its back on it, and it looked rather forlorn, with many weeds and a low volume of flowing water. 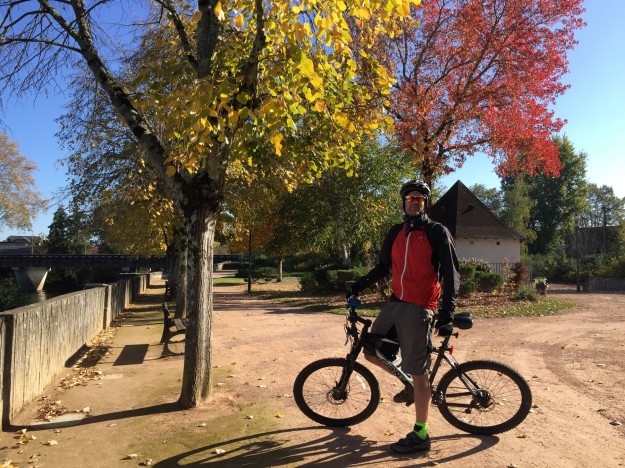 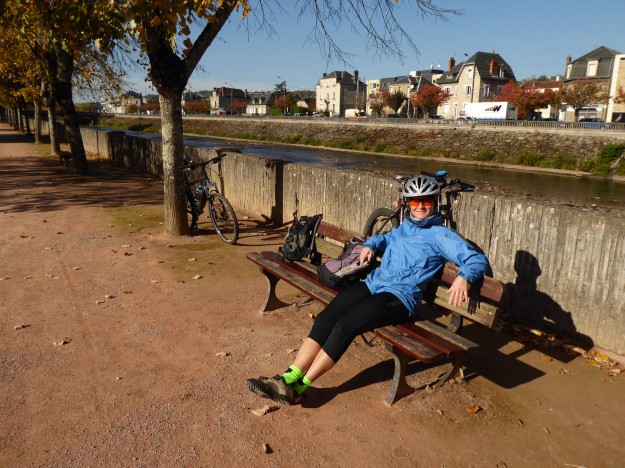 We had been dreading the cycle back home, so we mooched about, putting off the long hill climb off for as long as possible.  We’d not cycled for a while, and were unsure how our legs would react to the protracted rise.  Instead of returning by the same road we had descended, we found an off-road cycle path that followed the river out of town in the general direction (east) we needed, rolling though beautiful forest trails.  We had a few sharp climbs on the route, and each time we thought that we were into the climb, but we kept being given a fast, exciting downhill that we couldn’t allow ourselves to fully enjoy with the ever-nagging reminder that we were giving away hard-gained metres that we would have to climb all over again.  But the path was fantastic, flowing along fast beside the river. 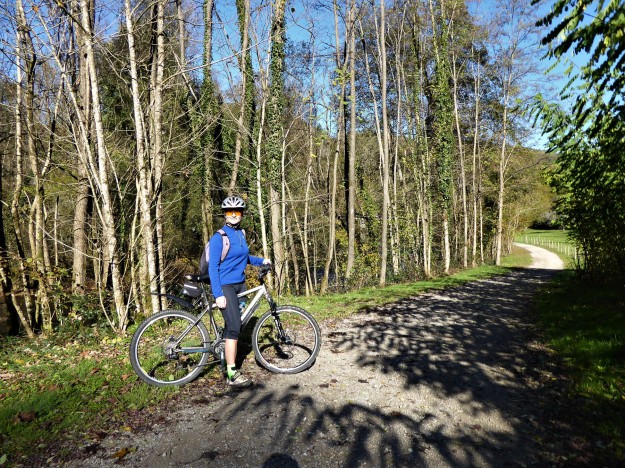 Rather than a gently rising 11km road back up to Dampniat we now, approaching from a different direction, faced a much shorter and sharper 4km long rise, with hairpins and spectacular views.  We rolled up it slowly, but in relative comfort, quite happy our legs and lungs were still able to respond to the occasion.  When we arrived back in Dampniat we were left wondering what we’d been so worried about, and enjoyed the last few hundred metres downhill back to the aire.  We passed a fun afternoon completing charcoal drawings of each other’s facial features, each attempt allowed a maximum of five minutes on the stopwatch.  We’ll not share the results, but it is fair to say that not all the sketches were equally successful.  We passed another quiet night in the aire, relaxing in the warmth and comfort of Benny.