Driving the Tourist route to GeiraingerFjord and Trollstigen

We said goodbye to our comfortable, wonderful campsite at Melkevoll Bretun, with the sun finally shining on the glacier, now framed with a blue background as we left.  It was a beautifully calm day, with the stillness creating a mirror surface on the large roadside lakes, and later on the end tip of Innvikfjorden.  High mountains were reflected with perfect clarity, the early brightness of the day creating a glowing, double vision of incredible beauty. 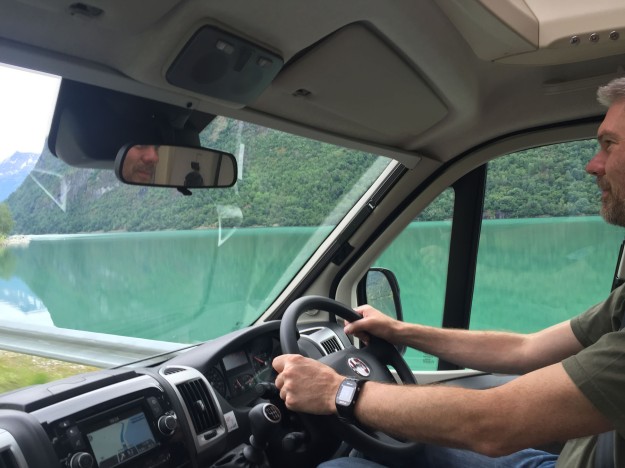 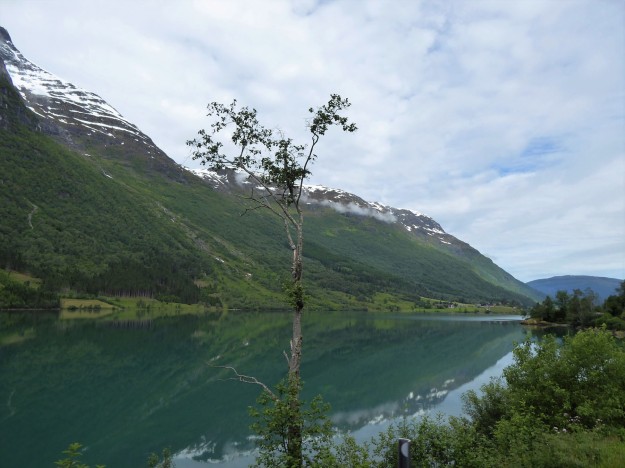 We stopped at a visitor centre and shop on the shores of the fjord, more for the views than anything they had for sale.  We stood on the fjordside and stared at the still water for several minutes, in simple contented awe.  We followed the coast of the fjord until we reached Stryn, before rising up over a series of hairpins and tight bends on Gamie Strynefjellsveg.  We climbed a little further than necessary on this road, to reach a large hotel with an expansive view down the valley, before retracing our steps back down and through a tunnel leading to a high pass. 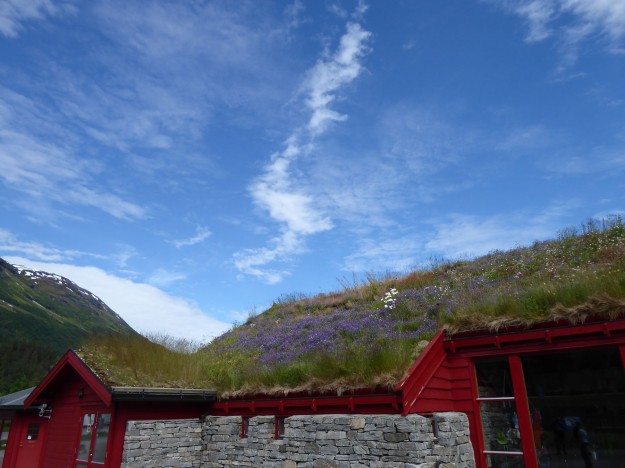 The tunnel road rose up on a constant and steady gradient, unrelenting for many kilometres.  When we finally emerged from the tunnel the scenery suddenly changed again.  We were now in rugged, exposed and bleak moorland, made of steep slopes and flat plains dotted with tufts of grass and ice.  The muted colours of yellow and brown now dominated, alongside the harsh whiteness of the patches of snow.  Lakes were frozen over, some with their ice beginning to break up in the flow, with small areas of blue water visible below.  It was a beguiling sight, so different from the reflective blues and lush greens of the previous miles at lower altitude.

Navigating another long series of hairpins we dropped back down towards fjord level.  We stopped at a small, and surprisingly empty, car-park near to a main viewpoint platform that was full to bursting with tourist buses and ambling visitors.  We were rewarded with fantastic views down to Geiraingerfjord below, complete with two moored cruise ships to add scale.  We sat a moment and enjoyed the view, then braved the road down into the town of Geirainger.  We had considered stopping at the visitor centre in town, but everywhere was overrun with buses, cars and tiny green rollerskate-like tourist mobility cars that scooted everywhere, that we missed our one momentary opportunity to stop.

Instead we continued through the busy town then climbed back up the other side of the valley on another long series of switchbacks.  There was another viewpoint here that was totally overrun with people and vehicles.  We had to queue for around 10 minutes just to crawl past it, with buses stopping on hairpins to drop off passengers, others double parking on the wrong side of the road, making it almost impossible for other traffic to pass.  It was total carnage, the first example of poor design and planning we’d seen on the National Tourist Roads.  After escaping the crowds, we found another viewpoint stop only a few miles further on that was mostly empty, so we stopped here for a bite of lunch on a picnic bench with a view of the fjord below. 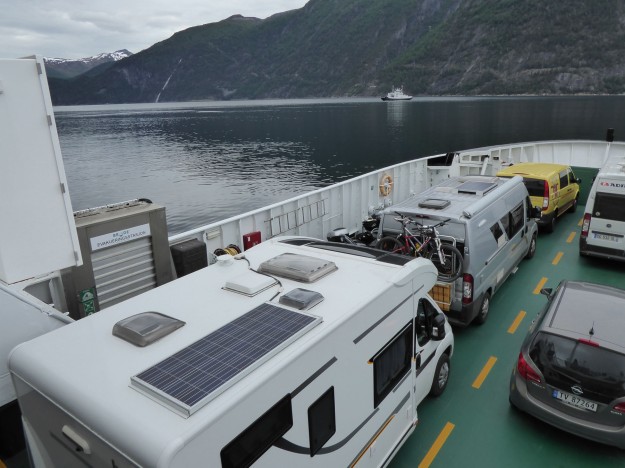 We continued along the National Tourist Route, where the main event of the day would soon be upon us; we would reach the top of the Trollstigen, a series of eleven complex hairpins that follow a gradient of 10% down and would later deliver us to the valley base, some 700m below.  Around 2500 vehicles traverse the intricate route each day.  A celebrated visitor centre and viewpoint had been constructed at the top of the pass to allow visitors to marvel at the road, the waterfall and the valley below.  We soon arrived and pulled into the large car-park, happy that it was not too full of tourist buses. 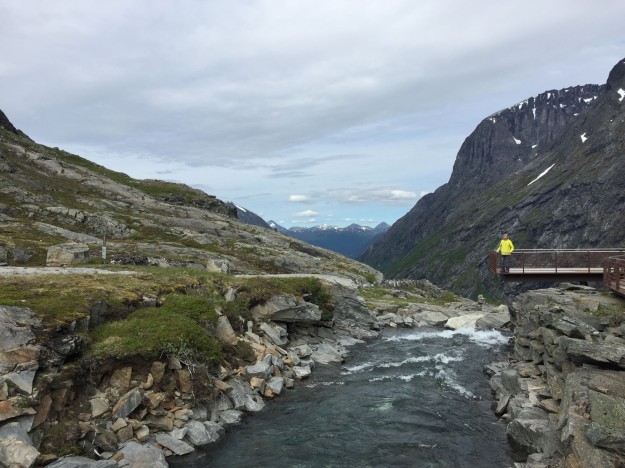 The visitor centre, water terrace walkways and viewpoints were all quite exceptional.  A flat concrete facade hid a row of tourist shops and toilets that were effectively buried in the ground, with externally clad windows behind allowing views out from them to the nearby mountains.  The main café was a triangular wedge with glass sides, clad in stone with a grass roof, balanced on a boulder base just above a series of still pools. Handrails of stainless steel contrasted with the pre-rusted mild steel supports, the walkways were screeded flush with the wide steel supports making for an integrated, level and hard-wearing pathway. 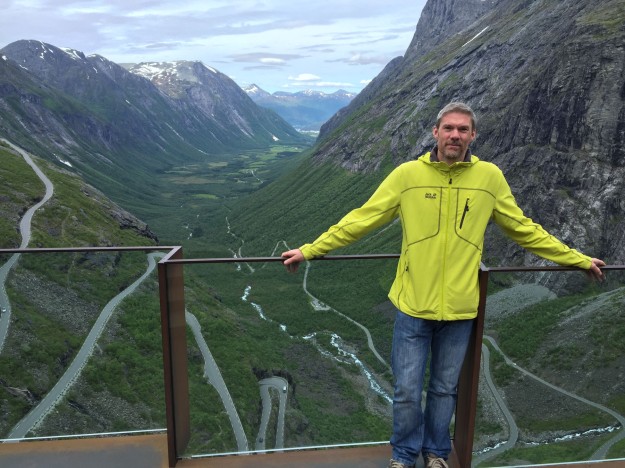 These elevated walkways led the way to a series of chosen viewpoints.  The first was positioned adjacent to the top of the 320m high Stigfossen waterfall, the next nestled on an existing rocky outcrop, the third built to provide that prefect view down to the Trollstigen hairpins below – our onward route.  This final viewpoint was a delight, even without the view.  It had a zigzag plan, lots of nooks and crannies offering differing views and perspectives on the valley view.  It had concrete barriers on one level for anyone a little queasy with heights to feel comfortable behind; glass balustrading at the front for fearless visitors to view over.  Its form allowed it to be interesting for visitors and still almost invisible from below, all integrated neatly into the natural environment.  It was a wonderful piece of architecture, sitting calmly on its cliff-top site and holding its own with the surrounding nature; as a man-made intervention, it almost outshone the exceptional engineering feat of the twisted roads that it was built to showcase.

After enjoying our fill of the view, we drove carefully and slowly down the Trollstigen, being slowed and stopped often.  We were behind a convoy of three buses, the first of which was extra-long with a double axle at the back, and it struggled to make each hairpin in one smooth sweep.  The road has an allowable maximum vehicle length of 13.1m and this bus must have been right on the limit. This gave us time to savour the views back up the sheer cliff face to the viewpoints and Stigfossen waterfall high above.  Once clear of the hairpins we were back on a smooth valley road, hugging the cliffs and the coastline, all the way to the town of Åndalsnes.

We stopped just outside the town in a large gravel lay-by to overnight, right on the banks of the fjord.  We could hear the low slopping of the tiny waves as we relaxed in for the night, content with the efforts of another full driving day in the Norwegian fjord region.

1 thought on “Tourist route to GeiraingerFjord and Trollstigen”