With very few good weather days over the past few weeks, we have had to be ready to jump when the mists lift or the clouds depart enough to allow a little sun through.  One morning we rushed out to cycle to the nearby village of Castelmoron-sur-Lot, taking advantage of a bright, clear start to the day.  We first cut across tiny country roads with absolutely no traffic to join a dedicated voie verte in the settlement of Temple-sur-Lot, stopping briefly to take in the church and the eponymous castle, now seemingly made into residential apartments with shops and restaurants on the ground floor.  From here we rolled on into Castelmoron, crossing the iron bridge and circling the central sights.

We left the town hugging the north bank of the river, following the voie verte back towards Sainte-Liverade.  The sun was bouncing off the still water, creating beautiful reflections of the opposite bank. We stopped off in the centre of Fongrave, where we found a small cantilevered viewpoint behind the church, looking out over the river and beyond.  We paused a while to soak up the view, feeling so pleased we’d made the effort to get out and see this stretch of the cycle-path.  We watched a van with a trailer awkwardly launch a small rib-boat into the river via a concrete slip, before continuing happily along the sunny, tree-lined banks.  We closed out our loop just before Sainte-Liverade and returned over the steep hill to Cazeneuve, contented with our morning activity.

One later morning we awoke to similar bright skies, yet with a deep cold in the air.  The air temperature was stable around 3degs C, but could feel much colder when the wind blew strong, or very much hotter when the radiant sun directly reached your skin.  We headed off in the opposite direction to our previous cycle, over to the next valley hills to join the voie verte near to Villeneuve-sur-Lot, heading east. We lost the path on the outskirts of town, so made our own way along quiet country roads in the general direction, bending round woodland and up some steep, forested inclines to catch our first glimpse of the hilltop town of Penne d’Agenais, standing proudly on the far horizon.  The cycle and final climb was reminiscent of a long cycle back in Portugal, heading to Monsanto, where we could see our target from miles away.

We made our way onwards and upwards, ever upwards, snaking around the sides of the hill as we climbed to the town. We slowly closed the distance to nudge ourselves to the very top, with the expectation of the upcoming view acting as a welcome reward.  Penne d’Agenais, a fortified medieval village set high on a steep hill with outstanding panoramic views, was topped off in grand style by the metal-domed Notre-Dame de Peyraguade.  This was a huge basilica that had been positioned on the site of a 13th century castle built by Richard the Lionheart, itself on the site of an original 11th century chapel.  The sanctuary forms, as many similar places do, another key stopping point on the pilgrimage route of Santiago de Compostela.  The myriad routes leading to northern Spain dominate the European landscape and the historic built environment, shaping so much of what we have seen on our travels. 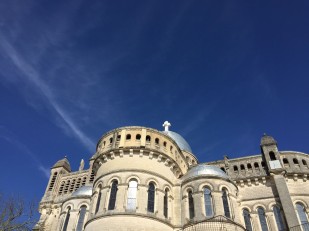 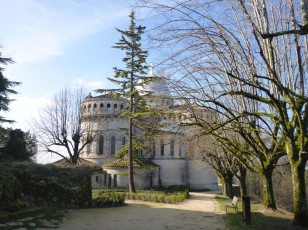 After a brief look around the town, we scrambled up the cobblestones to the plaza around the front of the sanctuary building.  It was worth the sweat.  The expansive view over the shining, silver domes of the basilica and the nearby river was exceptional, and made all the better by us being the only people who had chosen to visit the village, and the sanctuary, this glorious day.  We soaked up the view as we wandered around the grounds, before heading off to fully enjoy a super-fast descent down to the nearby town of Saint-Sylvestre-Sur-Lot where we stopped on a park bench to top up on snacks as we watched over the glistening river and the shining dome of the recently left basilica. Then it was back onto the voie verte, north of the river and eventually into Villeneuve, before heading home again.

We’ve been busy on other fronts too.  Alongside our daily French language practise and training runs, we have been improving our table tennis, archery and pétanque, and more importantly, planning out the months ahead.  We have secured another French house-sit in May near to Riberac, a little closer to the area where we hope to settle.  We have a few upcoming house viewings to try to get a feel for what we ultimately want to buy.  We have entered our first Swim-Run event in Lake Vassivière near Limoges, in June.  We have organised to walk the Tour de Mont Blanc circuit in early July, eleven days and 109 miles of glorious hiking in the high Alps, through France, Italy and Switzerland.

Afterwards, we have vague plans for a quick scoot around northern Italy before returning to France to, hopefully, finalise the purchase of our chosen house.  We have lots to look forward to, and surprisingly, this year will be our very first summer spent in France, so we will see it lit up in the full glory of summer sun for the very first time; we’re excited.

5 thoughts on “France – Penne d’Agenais and around”