We rolled away from Banyoles, heading east towards the coast. We stopped at Torroella de Montgri to have a short walk around the town, having read comments praising its centre.  It was pleasant enough, with a few nice squares and a stone-built cathedral, but we found it no more special than many other Spanish towns. We continued to the coast, following a convoluted way around the narrow roads into the coastal town of Sa Riera. 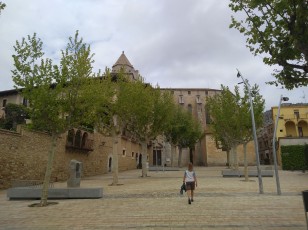 Our sat nav kept demanding we turn down roads that didn’t exist, or were clearly private driveways, so we improvised (read: guessed) at several turns.  At least our route offered a wonderful look over the bay and a glimpse of the fabulously located homes that line the rugged steep cliffs, but it made for some tentative and nervous driving.  We finally arrived at a car-park ( 41.971170n, 3.208628e ) near the Platja de Sa Riera, listed as an aire for the price of €3 per day.  Whilst we were there, still out of season, no one appeared to collect any payment, and we saw only one other car parked there, so it was clearly not worth their time this early in the season. 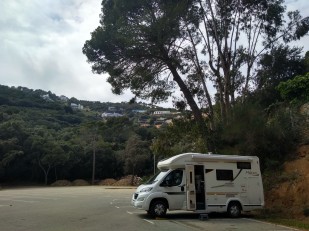 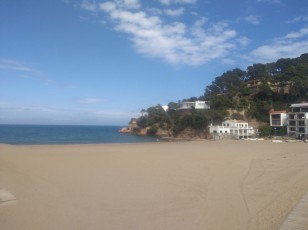 We walked to the beach and a short way around a stone built coastal path, taking in the rugged orange rocks of the cliff face and the wild churning sea below.  Two young girls played alone on the sand, building castles, and one older man lay dosing in a separate bay.  The air was warm, but the sky was back to a dull grey, thick with cloud, with occasional gusts of chilling wind.  We had hoped for sunnier days and calmer seas, and the desire to swim here was not within us.  We collected a few choice bits of smoothed white driftwood with the intention of fashioning something useful from them once home, and then returned to Benny to relax for the remainder of the afternoon.  The wind died down later and we utilised the expanse of the empty car-park for a tiring, competitive game of frisbee. 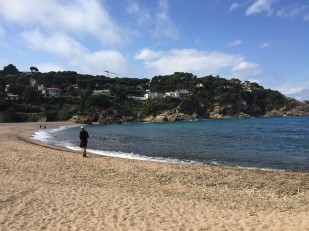 The morning brought more cloud cover, so our hopes of a relaxing sunny beach holiday were in danger.  Without the weather, sitting around was not ideal, so we accelerated our plans and decided to move on to explore nearby villages instead.  Only a few miles south, Begur centre had a large sandy car-park that had been wildly pitted and cratered from heavy rain or flooding.  We appeared to be the only vehicle brave (or stupid) enough to use it, but it was ideally placed for visiting the town.  We watched several cars desperately circling other obviously full but tarmacked car-parks looking for spaces rather than join us.  From here we walked through the  beautifully kept streets of the town  to reach a castellated wall that was once a castle and enjoy panoramic views over the rolling hills and out to sea.  We could see the beach at Sa Riera clearly from here. 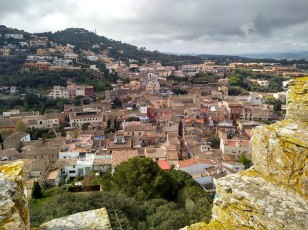 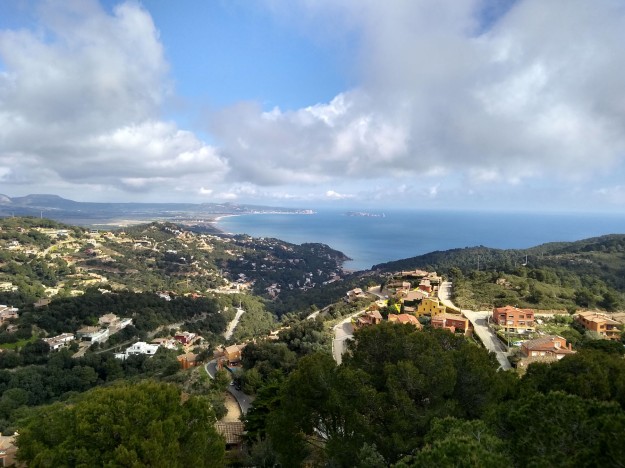 It was market day in Begur, so there were lots of visitors, giving the town the feel of a thriving, vibrant community.  We enjoyed our bracing morning walk, before descending back down the hill and moving on to the next village.   We arrived next in Pals.  Not knowing where best to park we picked out a parking area noted on Google maps which turned out to be the local cemetery, but proved ideal for us, and was very convenient to the centre.  A short, steep walk and we arrived in the heart of the beautiful village.

It was almost too perfect, too neat.  After a few minutes of wandering, it began to feel artificial, like a film set created only for visitors to photograph and fawn over.  We popped in and out of lovely cool shops, immaculately finished and with neat shelves stocked with decorative, well- presented goods.  All staff members spoke at least three languages, ready to accommodate anyone wishing to purchase goods.  So much tourist money, and guided tourist groups, flowed through the streets.  We were equally impressed and appalled.   The main focus was on art galleries and pottery, local traditional skills.  We  joined the hordes and treated ourselves to a fiery red serving bowl, a splash of colour for our kitchen.

As on the church bell tower in Pals, there are yellow ribbons tied, spray-painted, chalked or inscribed everywhere around the Costa Brava. We initially thought they might be connected to Easter, but soon learned they are a (rather contentious) symbol in support of Catalan independence.  The leaders of the recent independence movement, now jailed and awaiting trial, have become a focus of activists who see them as political prisoners and self-determination as a right, not a crime.  Other pro-Spanish union groups have been removing public ribbons and this has led to heated exchanges.  The villages we visited around the Costa Brava coast all appeared to be in support of the independence movement, but it’s a complicated issue that has divided families.  Many runners in our 10km race back in Olot were wearing shirts with slogans in support of the jailed politicians.