We crawled through the busy centre of Millau continuing south-east, to overnight in the village of Alzon. We easily found the aire and settled in for the night. There was a local pétanque game in progress opposite and we sat with a glass of wine and enjoyed watching in the soft evening sun. After dinner we had a stroll through the village, the four storey buildings flanking the central shady square displayed a tired grandeur. We paused here and enjoyed the peacefulness and the quintessential French feel of this hillside village, allowing the flow of history to wash over us.

Our onward road clipped the bottom portion of the Parc national des Cévennes. Grand red poppies lined our route, growing like weeds in unlikely places, but splashing colour and warmth wherever they were. The countryside was becoming more Spanish in our eyes, with wide gorges, limestone bluffs, deep lush greens, and steep stone terraces overflowing with olive trees and pink flowers. The road followed the low-flowing river, snug between high cliffs and a sharp vertical wall dropping to the riverbanks below. We saw nothing but blossoming nature for miles, then suddenly got trapped in a wild swarm of human commerce, hugely busy pockets of life and noise we thought from the map would be only tiny, sleepy villages. Just as suddenly we escaped back to peaceful, empty countryside.

On leaving the park the scenery slowly transformed into expanses of olive trees and vines. The route was straighter, flatter, offering a more expansive view across to distant hills. The only animals in the fields were horses, all land was given over to the cultivation of high end products. Tall cypress trees and squat lime-coloured cactuses began transforming the land into a more Mediterranean feel; we were closing in on the coast. We passed hundreds of local domaines offering direct sales and degustation. Each was either a ramshackle collection of rugged stone buildings surrounded by scruffy yards or beautifully finished, immaculate visitor centres dripping with wealth.

Our first stop this morning was at one such farm store selling olive oil, wines, honey and jams, in the town of Uzès. Missing a turn, we did a slow loop around the town, enjoying the casual beauty of each street in turn. From our slow-moving vantage point the town was replete with cafés and shiny shops, old stone churches and tiny cobbled streets. (You could say it Uzè’d charm). After a complete circle of the wonderfully vibrant town centre we finally turned off and found the Domaine St Firmin. We had read the place was a popular stopover, and true to word we found it absolutely full, with around twenty vans in rowdy residence. We parked awkwardly in their yard and had a quick degustation of a few summer rosés, purchased a bottle of our favourite, then got back on with our journey.

Another hour of beautiful, empty roads, their verges sprinkled with bright flowers, brought us to the busy outskirts of Remoulins. We found the aire near the bridge (43.938068, 4.558423) and picked out a corner spot between some badly parked cars. We scoffed a quick lunch then packed our swim gear and began, under a strong sun, the 3km walk to the Pont du Gard. We were thankfully shaded most of the route by plane trees and stretches of light woodland. We reached the gates to the park and walked in along the voie verte, immediately facing the famous three-tiered Roman aqueduct. There were de-clothed bodies scattered everywhere we looked, soaking up the sun’s heat. Large groups of visiting American students paddled in the shallows of the river, chatting loudly. We crossed the lower tier of the bridge, taking in the immense scale of the ancient build. The size of the each carved individual stone in the pillar bases was incredible, the organisational undertaking and size of the workforce must have been a sight to see. 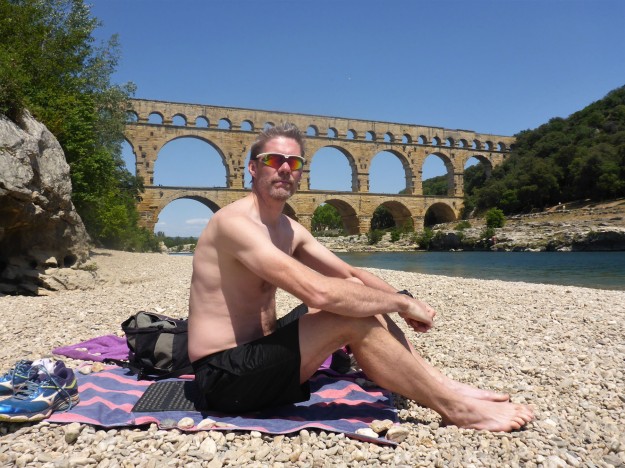 We dropped off the left hand side to reach a pebble beach where we flopped down by the calmly flowing river’s edge. Groups of kayakers idly floated by as we eagerly readied ourselves for a cooling swim. The water was warm and we played and cooled off, swimming across the river and climbing rocks to jump back in, like children. We lazed in the sun, reading and relaxing. Occasionally we would glance up and re-see the aqueduct in all its glory. We would again marvel at the Pont du Gard’s domineering size and the privilege we had in being able to casually swim in its giant shadow. By 4pm we were satisfactorily cooked and took our leave, with the firm intention to return later that evening to witness the colourful June light shows that were projected onto the structure. 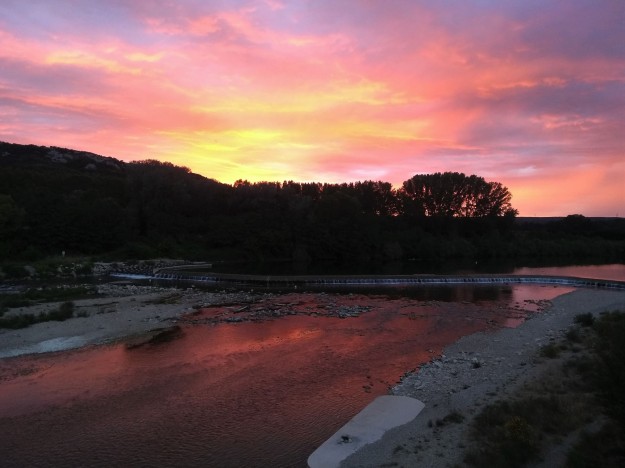 When we arrived back at Benny, the subtle heat of the day had a sudden change of heart and brought forth a storm of sticky humidity and, following that, heavy drops of rain. We soon decided to forgo our return, but after the rains dried up and with the delight of an intensely bright red sunset later, we began to regret not returning to watch the light show illuminate the Pont du Gard as planned. We could still have made it, as the show was not expected to begin until 9.30pm at the earliest. But we were both still feeling tired from all the jobs at home and this trip was about recharging. We need to learn to slow down and accept that rest is a part of life and not every moment needs to be filled with activity. The choice to remain in Benny came with a sigh, but was likely the right call for us.

1 thought on “France – Alzon, Uzès and the Pont du Gard”