Crossing the 3km long Pont de Ré to the island, we thought our luck was definitely in – the toll was halved (to €8) only the day before we arrived, and the sky was looking blue and only lightly cloudy, so unlike the gloomy forecast we feared that stated storms were due.

First impressions of the island were a little mixed;  it certainly had the old world charm stemming from an homogeneous, uniform  building style (max. two storey, red tiled roof, whitewashed rendered walls with a choice of duck egg blue or olive green shutters) that belies a calm confidence and understated elegance.  But it also had a strong feel of holiday park, like a 30km long campsite complete with beaches, manicured lawns, postcards and kiss-me-quick hats.  We’re told it’s the playground of rich Parisians and mostly consists of second homes or holiday lets. I can only imagine the overwhelming hustle of the crowds that it draws on school holidays, when the weather is scorching, as it was still thronged with visitors now in mid-September. 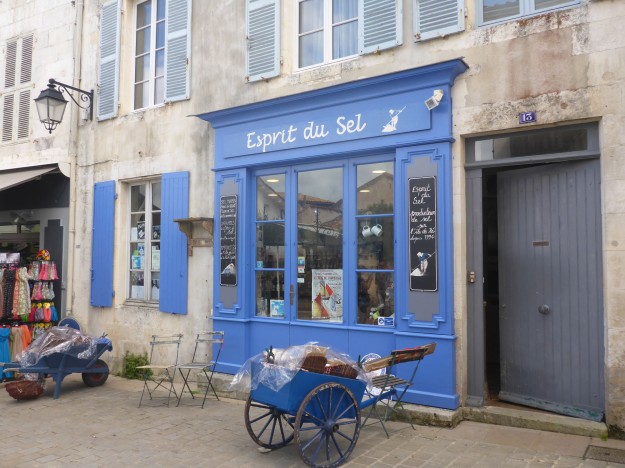 Our first hope for an aire proved to be a bit of a wild goose chase, with the municipal stopover at Le Bois du Pas des Boeufs no longer existing.  The replacement private campsite was asking for €25 per night, more than our typical budget, so we politely declined and moved on.  We headed instead to the north west of the island, slightly more rugged and wilder and further from the crowded towns of Sainte Marie de Re and La Couarde sur Mer.  The causeway and the west side are dominated by salt farming, with many hundreds of formed salt pans that gather sea water and evaporate it off, collecting various grades of salt by scraping it out of the dying pools to sell at much inflated prices.

We found a nice aire in Saint Clement des Baleines, with services and unmetered electricity included, for €10 /night, so this became our base for a couple of days. We settled in and then decided on going for a long walk, rather than our usual cycle, to give our legs a little different experience. 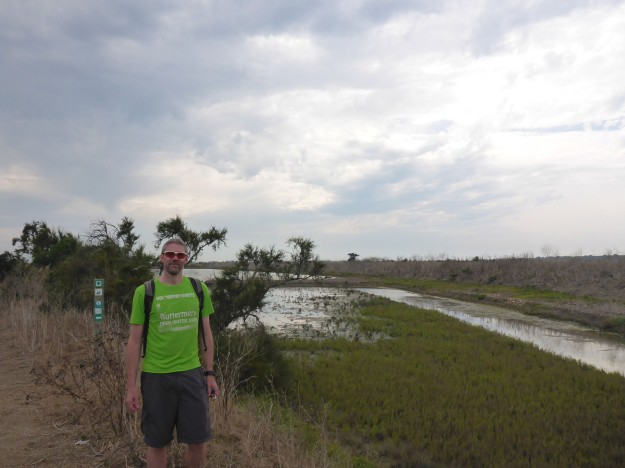 We headed off through the marshlands and salt flats, where we spotted lots of varied local birds, including  herons, egrets and avocets.  The walk was flat and paved, and we were passed by several cyclists as our chosen route also formed the direct car-free route to Les Portes en Ré.  As we progressed, the weather was quickly taking a turn for the worse and the promised storms were now looking like a reality.  Dark clouds hovered ominously over us and a few spits of rain fell, but nothing to worry us as yet, even if we were now 7km from base.  We reached the village of Les Portes en Ré and had a quick look around the shops and Information centre before heading to the beach and following the coastal path north and north west.  Covered in deep sand and much slower going, we trudged along, with intermittent views of the sea or in narrow wooded areas set some way back from the edge.  We zigzagged along, sinking and sliding in the sand, before cutting back away from the coast to find a more palatable path as we crossed the north of the island, past Pointe du Lizay, in the direction of the Phare des Baleines, a popular lighthouse.

On the approach from Plage de la Conche, the weather finally broke and the clouds shed their heavy load. The air temperature still held hot and sticky, so we donned our waterproof jackets like capes, only our hoods holding them to our heads.  This kept the majority of the weather at bay as we progressed.  We arrived at the lighthouse to find it surrounded by tacky tourist stalls selling fishing nets and postcards, the same the world over, an experience certainly not improved by the soggy, dull weather. We walked a loop of the grounds and looked out over the sea behind, before leaving the crowds of sodden tourists behind and continuing our walk.  We headed south down the west coast, back on mostly paved paths winding through vineyards. We found a boulangerie and the small marché in the centre of Saint Clement des Baleines and stocked up on a few essentials before making our way back to Benny.  The walk was 17.5km in all, quite a bit more than we’d been expecting at the outset, but allowed us a decent overview of the varied terrain in the north island.

Soon after we returned and got started on settling in for the night, the skies exploded and the full vengeance of the storm was released.  The van was flashing as lightning lit it up, followed by thunderous roars.  It was dark outside, but we opened the door a couple of times and could see the standing water outside the van.  It was sitting on the hard grassy site that hadn’t seen rain for months, and our van looked like a tiny island nation, surrounded in all directions by water.

The next morning, as if nothing had occurred, the ground was dry and the sky a deep blue, with only a few wispy clouds on show.  We had thought we wouldn’t get to cycle at all if the storm continued, but it fully abated, so the cycle ride was on.

The island is fully set up for cycling, being mostly flat and with many distinct cycle lanes throughout and lots of bike-hire places dotting the island.  Most places seem to specialise in hiring electric bikes, to allow larger-framed, older or less experienced cyclists the dubious opportunity to wobble their way recklessly around the island pathways, stopping, swerving or turning at will, with no obvious regard for their surroundings or their own safety. But still, they’re out there doing it and that’s what counts.

We successfully negotiated our way clear of these meandering cyclists and threaded our way across a cycle-only causeway and towards the main town of the island, St Martin de Ré.  A walled port with sheltered harbour afforded the swanky boats moored up protection from the elements of another day, as today blue skies and sunshine dominated.  Many chic cafés and expensive restaurants added to the pleasing, bustling yet tranquil atmosphere of the quaint quayside setting.

After a quick tourist centre stop to check emails, we cycled out to the next village of La Flotte in search of a sandy beach noted on our map; it didn’t disappoint.  Only a few kilometres away, yet it still proved too long for the changeable weather.  The grey skies shoved the blue out of the way and heavy dark clouds full of rain replaced the fluffy whites.  Without any possible shelter, the clouds burst and warm rain soaked but refreshed our warm skin.  Just a short and heavy burst, but bad timing, and much too late we found a bus stop shelter in and wait out the deluge.  With our next planned stop a swim at the beach, our wet status wasn’t really an issue, and skin dries quickly.

We enjoyed a baguette with cheese and tomato picnic lunch on a bench overlooking the pretty sandy beach, carefully watching the sky for further changes.  After a quick beach change into costumes, we had a short swim in the bay, surprised to be joined by up to fifteen other bathers in the time it had taken for the sand to dry. The rounded bay of sand held calm and inviting light blue water, warmer on this west coast midway down France than our previous swim on the northern coast at Dinard. With already 25km completed by bike to arrive at this, the furthest point from our camping aire, we didn’t strain ourselves with much energetic swimming, but enjoyed a refreshing and relaxing dip, before returning to the bikes and heading back.

The route of our return journey varied from the outward, but was visually similar.  It was mostly quiet cycle paths through vineyards and farmland, with one windmill for good measure.  With its sails fairly battered, it looked a little forlorn and unlikely to have ground grain for some time.  We arrived back to Benny late afternoon with 46km cycling completed, bagged a refreshing beach swim and enjoyed a typical French picnic with baguette;  a good effort, despite the changeable weather.

After dinner on our last night we took a short walk to our local beach, on the west coast, to watch what turned out to be a very spectacular sunset.  The Atlantic surf was rolling in quite a distance out, with the nearby rock pools looking as if filled with blood from the deep red reflections from the setting sun.  The cloud formations overhead added a level of menace and depth to the occasion, becoming even deeper red once the sun had finally fallen below the horizon.  We watched in silence for a few long minutes, then walked back to Benny hand in hand along the sandy beach, feeling fully content with a day well spent. 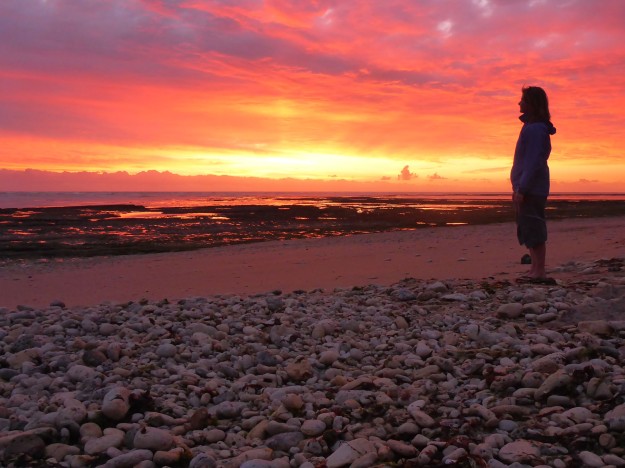