We left our comfortable, icy pitch in Villeneuve with just a little touch of difficulty, needing the helping traction of the matting again to escape fully.  The roads were beautifully clear outside the site and onwards, so we drove north, passing again through the village of Monetier-les-Bains and out over the Col du Lautaret in the direction of Grenoble. 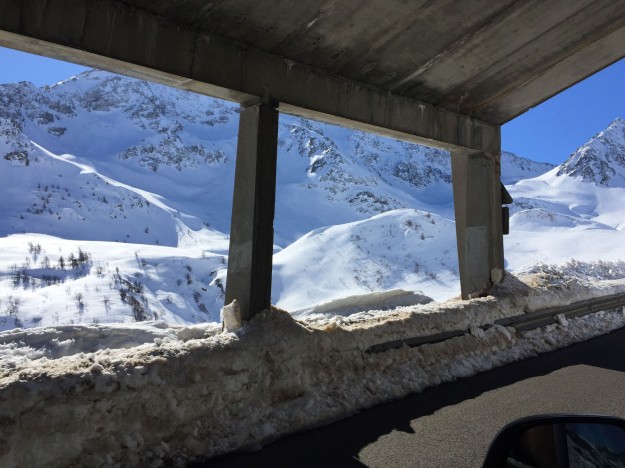 The pass over the mountains was empty of traffic, with us again missing the main ski area transition day by 24 hours, and the views at every turn simply spectacular.  We wove through a deep valley with tall, snow-covered slopes and glacial lakes on each side, passing through pretty but robust villages perched on the slopes, such as at La Grave.  We had been reticent about this route should the weather be poor or the roads icy, but the sun was bursting out of a deep blue sky and it was as perfect a journey out of the Alps as it could be.

But after a peaceful week of skiing with no driving, and an enthralling mountain descent, we really didn’t enjoy the sudden crowds and heavy traffic on the outskirts of Grenoble, finding it hard to readjust to being surrounded by busy, impatient, reckless drivers.  We tried to stop in two different supermarkets in Grenoble but were denied in the first by lack of space, then by unnecessary height restriction barriers on the second.  So we pushed on, back out into the countryside and away from throngs of people, to a much more appealing third option, a large Super U on the outskirts of the town of Apprieu.  Here we rested a few hours, restocked our fridge and cupboards at our leisure and laundered our clothes after our week of skiing. 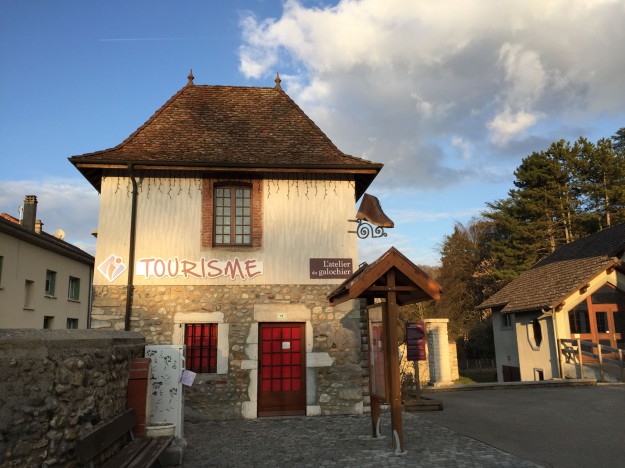 We stayed out in the rural rolling countryside, with it looking much like it could be the home counties of England.  The only exception was the distinctive style of the housing, with their decorative patterns in the roof tiling and steep, mansard roofs adding an aristocratic grandeur to the view.  We drove on, deeper into rural idyll, arriving mid-afternoon in the small village of Visieu.

We spent the night in a quiet aire next to a waterwheel from an old flour mill, that every four or five minutes would explode into life and spin with a large grinding splash when the weight of the water built up enough to move it.  We initially thought the sudden noise of it, so close to us, would keep us from sleeping, but we were obviously weary and it proved to be more soothing than distracting. 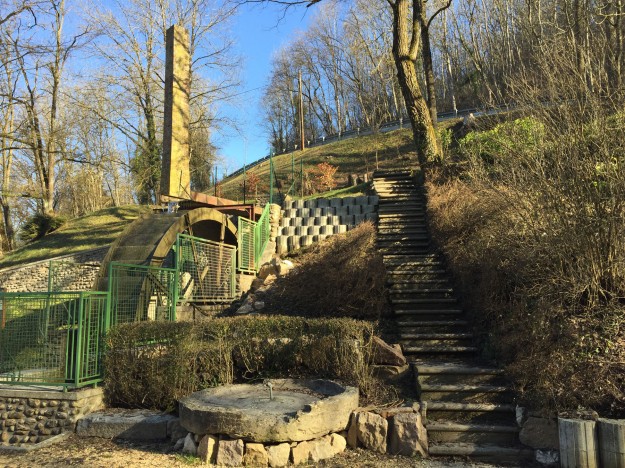 We walked the short distance into town, taking in the closed Tourist Office, the church, the Mairie and several quaint shops – the usual suspects in a small French village.  There was one unusual element though – there were several unplugged fridges positioned around the town, filled with books for borrowing or swapping at your leisure.  The smaller freezer compartments, usually at low level, had children’s books inside.  A novel idea, indeed. 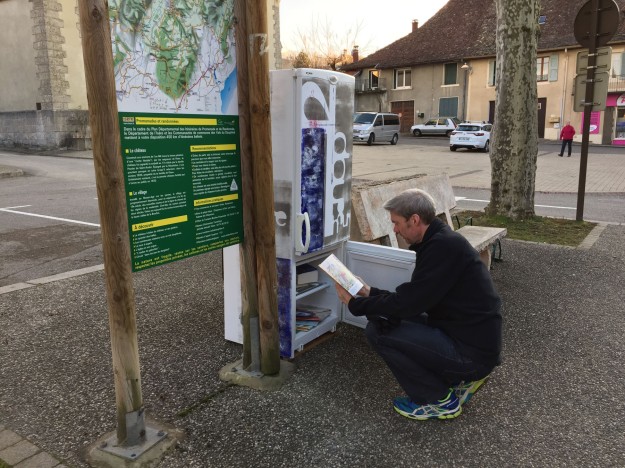 On a whim as we passed through the village of Morestel, we pulled over into a generous parking area and decided to visit the local tourist office.  They were so helpful with suggestions of local cycle routes and maps that we changed our plans.  As it turned out, Morestel, self-identifying and promoted as the cité des peintres, was a very pretty and interesting place.  Striking, almost white local stone had been used for the buildings, walls and pavements around the old centre. 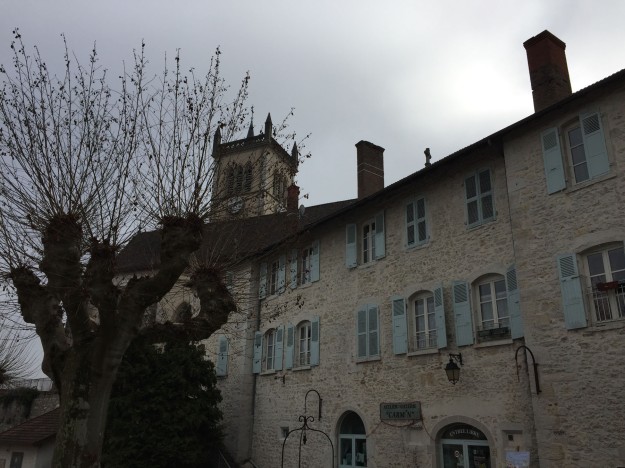 Many renowned impressionist artists, such as François-Auguste Ravier, had been in residence in the town, and their homes were now utilised as museums or galleries.  The muted colour of the pale, pastel stone provided a beautiful, consistent backdrop as we walked slowly around, stopping in each square in turn, enjoying the tidy buildings with their classic heritage-coloured shutters.  We could have so easily missed this town and been none the wiser by simply driving on through, but were very glad to have stopped, albeit briefly.

The town of Belley was not initially on our radar at all until our stop in Morestel, but then became our focus after learning of several circular Voie Verte cycle routes in the area.  There was a free aire in a small mixed parking site adjacent to a rugby playing field, with matches in full flow when we arrived.  We parked up and walked the short distance into the centre, where we looked around the Mairie and tourist office, then had ourselves a thoroughly lazy afternoon relaxing in and around Benny, planning our next few days. 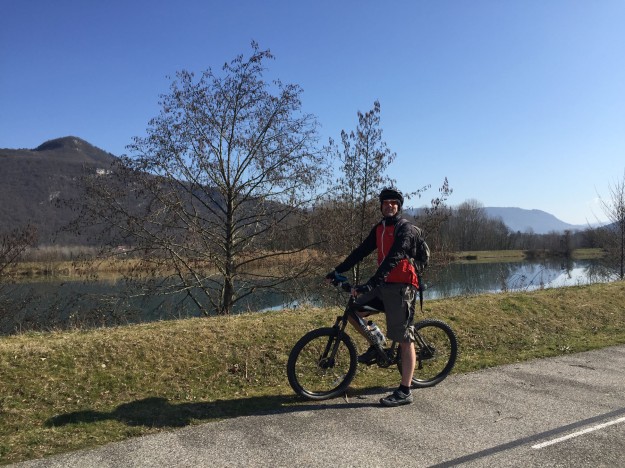 The following morning we undertook a long canal-side cycle, around 55km, on off-road gravelled or tarmacced paths for most of the way, to the small village of Glandieu.  The canal water was a deep, metallic turquoise, glacial and heavy with minerals.  Glandieu seemed to now have based its existence on the tourism attracted by its large, pretty waterfall, and it was here we sat and enjoyed our lunch in a small patch of sun, as we watched the falls gurgle.

Rather than retrace our route along the canal, we returned over the hills behind the town, via the small townships of Prémeyzel and Arbignieu.  We had the only climb of the day, short and sharp, to reach the first village, then a long, shallow but sweeping descent to bring us all the way back to Belley.  The weather held off, staying cold yet clear and sunny, although there were strong progress-slowing winds at times, a sign of things to come. 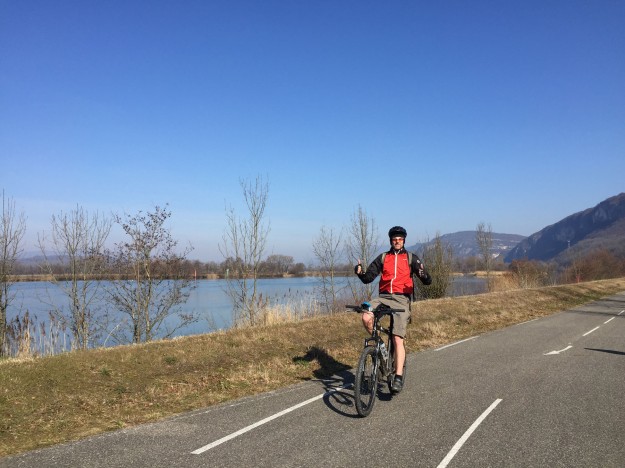